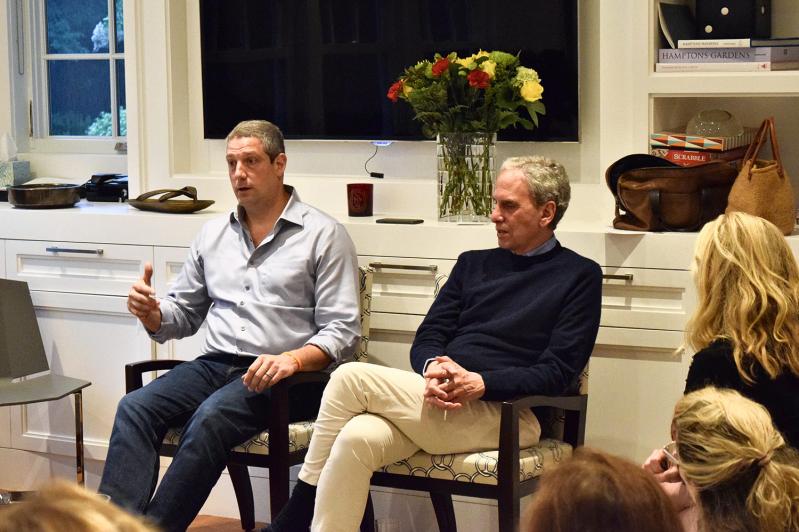 Representative Tim Ryan of Ohio spoke about his campaign for the Democratic Party’s nomination for president in East Hampton last week.
Christopher Walsh
By Christopher Walsh

On Aug. 28, Representative Tim Ryan of Ohio brought his long-shot bid for the Democratic Party’s nomination for president to East Hampton, where for around two hours he spoke on topics both conventional and esoteric.

A native of Youngstown, Ohio, a onetime center of steel production that saw a more than 60-percent decrease in population following that industry’s decline, Mr. Ryan told the gathering at the East Hampton residence of Nancy Chemtob and Michael Kubin that as a moderate from the Rust Belt he is uniquely positioned to take on President Trump. While that may be a familiar pitch, some of the topics on which he expounded were not the stuff of a typical stump speech: food as medicine, meditation and mindfulness, regenerative agriculture.

Sipping from a glass of beer, the candidate, who is 46 and serving his ninth term in Congress, nimbly transitioned into campaign mode after navigating late-August traffic on the Long Island Expressway, his flight having landed hours earlier at La Guardia Airport in Queens.

“I have the agenda that can transform the country,” he said. “I’m in a position where I can talk to these voters who went for Donald Trump because of the economic anxiety they had for so long — they were, like, ‘To hell with both parties, no one’s helping us.’ White voters voted for Trump, and African-American voters stayed at home. I can fill that void with new ideas that people get really excited about.”

The author of “Healing America: How a Simple Practice Can Help Us Recapture the American Spirit,” on mindfulness, and “The Real Food Revolution: Healthy Eating, Green Groceries, and the Return of the American Family Farm,” Mr. Ryan grew animated in championing these less-conventional policy proposals. Meditation has proven physiological as well as psychological benefits, and is taught to at-risk youth and veterans suffering from post-traumatic stress disorder.

He has also drawn support, he said, for advocating a move away from what he called “a ‘disease care’ health care system,” in which the bulk of spending is on chronic diseases like high blood pressure, heart disease, Type 2 diabetes, and some cancers. “This is about obesity, this is about $3.5 trillion a year in chronic diseases that are preventable,” he said. “We . . . can incentivize doctors where they can actually make money by keeping us healthy; patients can get rebates and refunds by getting and staying healthy.”

For a cheaper, one-time intervention using food as medicine, “you can literally reverse Type 2 diabetes,” he said, eliminating expensive annual treatment “as far as the eye can see.”

But Democrats advocating an end to private health insurance are on a path to defeat, he said. “I believe in universal health care,” he said, but two of his competitors for the nomination, Senator Bernie Sanders of Vermont and Senator Elizabeth Warren of Massachusetts, “will literally force you out of your private insurance into the bigger system.” Should either be the party’s nominee, “we lose 48 states,” he said.

“I think we should build an alternative system, a public option . . . but you can’t force somebody.” This, he said, is why he talks to voters about food as medicine and reversing chronic disease, “as opposed to, ‘We’re going to take over the health care system.’ ”

“It’s not about left or right,” the candidate said. “It’s about new and better. There are so many new ideas that can transform the country.”

Solar and wind power are growing at double-digit rates annually, he said, and 10 million electric vehicles will be made globally in the next 10 years. “What I’m saying is, I want half of them made in the United States, built by American workers who have been losing their jobs. Then you need batteries to go into the electric vehicles. I want to build the batteries. The charging stations are going to be a multi-trillion-dollar industry. But we have no strategy.”

He advocated a chief manufacturing officer, reporting to the president and charged with developing that strategy, incorporating the federal Departments of Energy and Transportation, the private sector, and research institutions. “Then you put a plan together, a real strategy, an industrial policy, and say, How do we dominate this industry?”

The president has embarked on a protracted trade war with China, but China dominates the electric vehicle and solar panel markets. “They have a strategy,” he said. “They are controlling large sectors of the economy, and I want us to do that. If we do that with our innovation, with our free-enterprise system, I think we can really take off, and then try to steer that growth into these communities that have been left behind: the old coal, old steel, old auto, old textile communities that have been ravaged the last 40 years.”

A reinvestment in infrastructure, said the congressman, would also be on his agenda. In China, “they have 550 pilot programs for smart cities, which means they have GPS all around the city, the driverless cars can fit into that whole system, they are trying to figure out how to move traffic around. They’re doing this in 550 cities; we have a handful in the United States.”

The event was not a fund-raiser, but on a night that one of his many competitors for the nomination, Senator Kirsten Gillibrand of New York, abandoned her bid, Mr. Ryan had a quick answer to an inquiry as to how those attending could help him: “You can help me raise money.” His staff is small, he said, and its limitations compel him to concentrate on a few states holding early primaries in 2020, like South Carolina.

Along with Senator Gillibrand’s withdrawal, Aug. 28 was significant in that the roster of candidates who will participate in next Thursday’s debate was set. Mr. Ryan is not among them, having failed to meet the thresholds of 2-percent support in four national or early state polls, donations from at least 130,000 unique donors, and a minimum of 400 unique donors per state in at least 20 states.

But, he told the gathering, “I’m from the area of the country that we need to win.” He tells his competitors that they need to talk to voters about the economy, jobs, wages, health care, “about what the average person in a place like Youngstown, Ohio, is thinking about. That’s how Donald Trump won,” he said, recalling the perception of the then-candidate as “the blue-collar billionaire.”

Voters are beginning to understand that they have been conned by the president, he said. “We lost our G.M. factory,” a reference to a General Motors assembly plant near Youngstown that was idled in March after more than 50 years in operation. “No steel mills opened up, and people went on to sell their house. This is another reason why I think I’m the best person, because he came to my area all the time and made all these promises. I’m the best person to be, like, ‘Dude, you’re full of shit.’ ”

“I am in a unique position,” the candidate repeated. “I am in an area that Trump won. I am 46 years old, I’m not 75 years old. I am into these other issues that can really help bring the country together. I am a moderate. I work with business. I’m in a position to really do something big, and I couldn’t not try.”