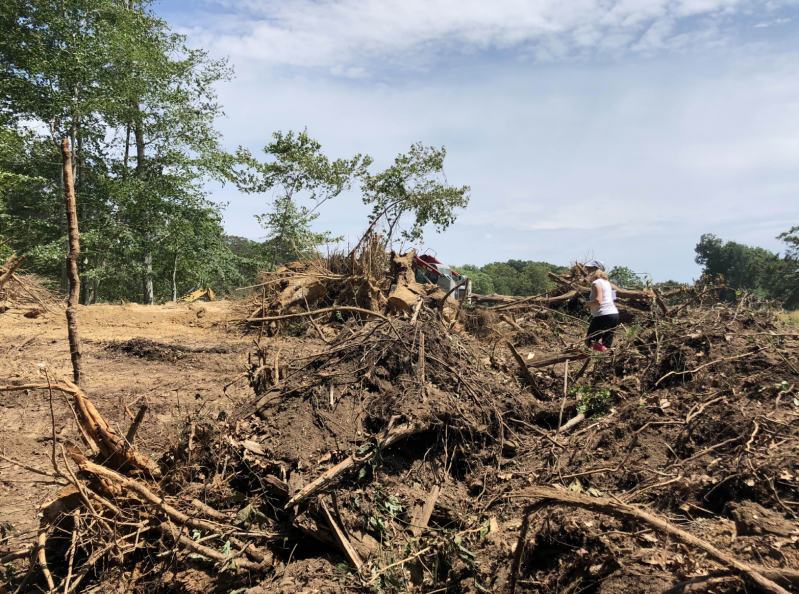 The owners of nearly six acres of reserved land in Amagansett, who were stopped from cutting down trees there after the Peconic Land Trust won a temporary restraining order last month, insisted they have the legal right to clear the land for agricultural use, and filed a motion to have the restraining order dismissed on Friday.

The property near Stony Hill Road is protected by an easement granted to the Peconic Land Trust in 1995. The easement prohibits the removal of trees, shrubs, or other vegetation from the reserved area unless they are “dead, diseased, dangerously decayed, or damaged,” according to its language. It also seeks to preserve land for farming, “provided that such agricultural activity shall be conducted in accordance with the purposes of this easement.”

The question is whether the clearing that took place fits the latter description.

“The entire premise of plaintiff’s case is false,” said Anthony Pasca, a lawyer for the owners, in a motion seeking to dismiss the restraining order. The parcel, said Mr. Pasca, is not encumbered by a conservation easement, but an agricultural one that mandates that it “remain forever available and suitable for agricultural use.”

Mr. Pasca said the Peconic Land Trust is disregarding the easement’s protections for agricultural use of the land, and solely focusing on conservation. By doing so, he said, the organization, “which ironically proclaims itself to be the leading farmland protection organization on Long Island,” is working against its stated purpose.

John v.H. Halsey, the president of the land trust, rejected that assessment on Tuesday. The easement’s protections, he said, are not an “either-or” proposition. Even though the parcel is an agricultural reserve, he said, “there are restrictions, and there are protections for woodlands” that apply to it. “The spirit of the easement has been compromised,” he said.

On July 31, a limited liability company whose members include Randy Lerner purchased the Stony Hill parcel. Mr. Lerner is the former owner of the Cleveland Browns football team, and owns Amagansett Square and several other Amagansett properties.

In an affidavit, Mr. Lerner said the L.L.C. had purchased the property “because it was understood to be available for agricultural uses.” He has been farm ing land in Amagansett for approximately 20 years, he said, and planned to use this property to grow fruit trees, rotational crops such as corn and potatoes, horticultural specialties, and cover crops, such as rye.

In 1994, the East Hampton Town Planning Board conditionally approved the subdivision of more than 69 acres that included this six-acre parcel. The land “at issue in this action is one of the six parcels that was designated as an agricultural reserved area,” Mr. Pasca said.

Prior to buying the property, Mr. Lerner said, the company hired Denise Schoen, a lawyer, to confirm the land could be cleared of trees and brush “that would otherwise have prevented us from creating useable, safe farm fields.”

Ms. Schoen, an attorney for Sag Harbor Village who had previously represented the East Hampton Town Planning Board for five years, said, in an affidavit, that after reviewing the legal documents regarding the parcel, “I concluded that not only could the property be used for agriculture in perpetuity but, in fact, the property was preserved by the town for that express purpose.”

Soon after acquiring the parcel, Mr. Lerner said, the owners retained Marders to clear the land and prepare it for farming. The work began in early August.

Mr. Lerner estimated the cost of Marders’ work to establish the farm, including labor and equipment, at $1.57 million. “This plan was in motion before the L.L.C. purchased the property and certainly before plaintiff appeared and began objecting to the removal of the trees.”

Alec Baldwin, who lives next door, alerted the trust to the tree cutting after he saw crews from Marders working on site. “The sound of lots of equipment roared for a full day, and at the end of that day the hastily assembled battalion had obliterated what was once a bucolic and protected piece of land,” Mr. Baldwin wrote in a letter to The Star.

In a suit filed Aug. 7, the land trust asked for a legal declaration that the owners were in breach of the easement, for a temporary and permanent injunction against violations of the easement, and for restoration of the property at the owners’ expense. The trust estimated that 75 to 125 mature, healthy trees had been felled. In an amended complaint filed on Aug. 28, the land trust claimed the damage to the property was in excess of $100 million.

“I’ve never heard of the land trust arguing against a farm,” Mr. Pasca said on Tuesday. “Why are they doing this?”

The trust would have been supportive of the owners’ agricultural plans for the property, Mr. Halsey said, if they had used the portion of it that had already been cleared. That pasture area, he said, comprised about 50 percent of the parcel.

Ms. Schoen, however, said the pasture was not farmable because it is steeply sloped. She also disagreed with Mr. Halsey’s opinion that agriculture reserves are protected by conservation. “That is antithetical to everything I know,” she said. “You can’t overlay a conservation easement on it, because if you can’t clear the property, you can’t farm it.”

The temporary restraining order has prevented the owners from doing any work on the property. “This has elevated the risk of topsoil loss and soil erosion,” said Mr. Lerner. “Dead trees litter the property and need to be removed properly and carefully in order for the next phase of work to begin.” He had been hoping, he said, to establish a cover crop to avoid having soil blown away by high winds.

Plantings that have already been purchased by the L.L.C., he said, are now sitting above ground, and “therefore increasingly vulnerable to becoming unplantable.”

The owners are asking the court to require the land trust to secure a $1 million bond to cover damages and attorney’s fees incurred by the restraining order if it isn’t completely dismissed.