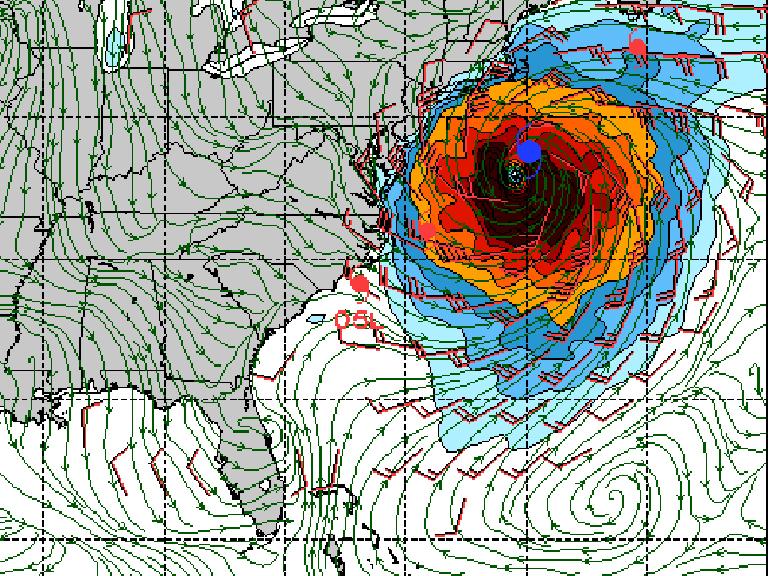 The projected path of Hurricane Dorian was to bring it to within 200 miles of Montauk Point on Saturday.
Fleet Numerical Meteorology and Oceanography Center
By Larry Penny

Labor Day has come and gone. A Category 5 hurricane visited the Bahamas and showed no mercy. As of my writing on Monday, it appeared to be on its way to the southeastern coastal states. It’s September, the favorite month for hurricanes. The shorebirds that went to the tundra to breed are already halfway south. We humans have very high I.Q.s, but we can’t fly. Some butterflies and darning needles are also on their way south. They have lower I.Q.s than birds, yet they can also fly and know where the winter is warm.

The world is in turmoil and we humans are the cause. We’re still killing each other with abandon, whichever way it’s done. Are we going to make it through the 21st century? I’m beginning to wonder.

The cardinals and catbirds that annually breed near my house in Noyac left early. Lois Markle says the pair of canyon towhees that have been around her house in Montauk all summer have also gone, along with their rufous-sided cousins and other species that help her keep her spirits up from June to September.

Now, nature will be cast aside. It is the season of the politicians. They are a unique species too, some of them very good, some very bad, most mediocre. If you read the newspapers, the bloggers, watch the news on TV, you will see that more than 50 percent of the world’s countries are at war, either with each other or internally, as in Venezuela, Colombia, Afghanistan, Sudan, Algeria, China, and a host of others. The world has never had so many weapons of destruction circulating from one pair of hands to another. We care more about ourselves than about endangered species. Yet we are an endangered species; we are on the verge of entering dystopia full blast.

On Friday, Saturday, and Sunday afternoons, vehicles on Noyac Road flew by with abandon in both directions, as many as 1,500 every hour. When I checked the traffic on News 12 during these same hours, Montauk Highway was half red and yellow in both directions, particularly so in Bridgehampton, but also in Water Mill and Wainscott. Luckily I didn’t have to go out.

Big storms are brewing. A tornado touched down in Manorville on Labor Day. The second largest hurricane since tropical cyclones in the Atlantic were given human names, blew up in the Atlantic well south of the Bermuda Triangle and tortured the Bahamas for days while threatening to heap woe on Florida, Georgia, South Carolina, and North Carolina. The path of a killer storm is modeled by meteorologists here and abroad, but the precise path is only a prediction in the final analysis. That’s why some of us refer to tornados, hurricanes, typhoons, northeasters, and the like as acts of God.

The squirrels in my neighborhood have been busy checking out the crop of acorns. Trees are not at all dumb. They don’t produce a bounty of nuts every year. They mix good years with the bad so that the seed eaters can’t get all of their mast. Otherwise, there would be none left to revegetate the forests and yards and replace those that are on their last legs. On Saturday, the squirrels were up in the wild cherries going from limb to limb, gleaning the fruit, I suspect. After 40 years in the same house with the same yard, I finally realized why none of that cherry fruit falls to the ground. Just as the early bird catches the worm, the early squirrel gets the berry.

My chipmunk is very personable. It comes to my bedroom window and looks in to see how I’m doing, eats a nut or two, then disappears. For three weeks now, when it’s not raining, the evening has been filled with the steady chants of snowy tree crickets, at times, joined by katydids. They were late this year, I’m not sure why. They usually get going by mid-July. Their nightly chorus drives some humans crazy, especially those more attuned to city noises.

I don’t mind the nightly insect chorus. It’s the hustle and bustle of summer day traffic, helicopter and plane noises, horns and firecrackers that drive me crazy. I grew up in Mattituck on a small country road. The crickets and katydids sang at night, birds during the day, while a motor vehicle passed by the house only every 10 minutes or so.

These days I find myself praying for the quiet and cool of fall and winter, and not for more summer. Must be getting old.