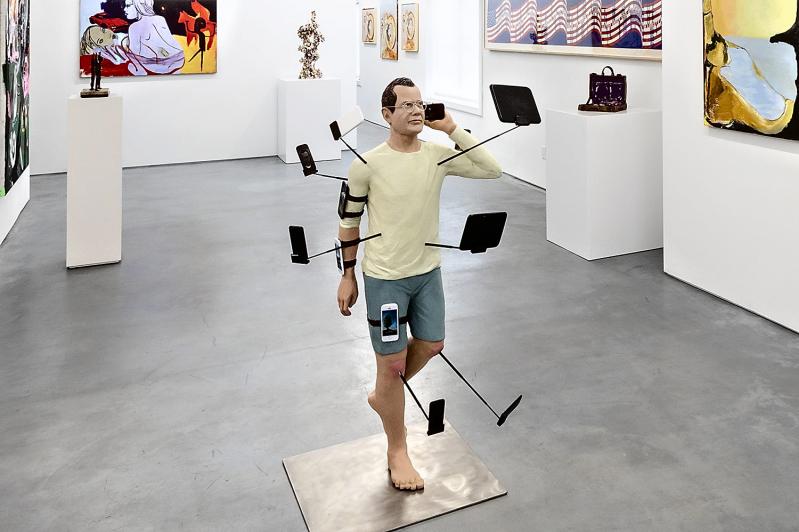 Rental Gallery in East Hampton has once again given itself over to the multi-hyphenate juggernaut that is Kenny Schachter, a dealer, artist, curator, and writer. Instead of a solo exhibition, however, “Summer Rental” is a group show revolving around his central sun.

The centrifugal force in the space demonstrates itself quite literally in the main gallery. It is there that “Selfie Man,” a reduced-scale self-portrait and effigy of Mr. Schachter, is placed at the hub, with its own rods radiating outward, attached to mock cellphones and iPads on selfie mounts, producing the sculpture’s own orbiting moons.

From there, the walls document his enthusiasms and passions, as reflected in the artists he has supported and the work he has promoted and collected for decades. Some 25 percent of the show is from Mr. Schachter’s own collection, and all of what is on view is for sale at prices the gallery described as affordable.

In a separate room, the output of Mr. Schachter’s entire immediate family fills the space in a claustrophobia-inducing installation of video, sculptures, and two-dimensional work. Whatever the opposite of a creative vacuum is, it exists in the Schachter household.

This exhibition easily could have come off as a scattershot mess, and yet it is remarkably coherent and often lyrical. It is not only one man’s tastes but also a kind of paean to those who have inspired him over the years.

Mr. Mesler, the gallery’s proprietor and an artist on view in the show, noted the dedication Mr. Schachter has had over the years to an artist like Acconci, a prolific creator of performance, video, and installation art who produced limited amounts of marketable art before his death in 2017. A 11-foot-long lithograph of his called “Wavering Flag,” from 1990, the largest work the artist produced, is evidence of this, as was Mr. Schachter’s hiring of him for design projects and other work over the years.

In the exhibition announcement, the organizers refer to themselves as “art-

lifers,” as if it were an affliction or a

sentence that they do not seem to mind too much. The show’s title, “Summer Rental,” is a reflection of this, an idea of art as “our sandpit, playpen, and fun in the sun.”

As “Wavering Flag,” with its faded “Old Glory” imagery moving across several panels, calls up vague memories of July 4ths past, other works nearby, like Mr. McGinley’s “Ocean Boys” and Mr. Algus’s untitled seashell sculpture, make literal references to summer themes. Other works allude to sun and fun whether directly or more abstractly. Ms. Stockholder’s mixed-media sculptures in two parts are reminiscent of oars in this context. Moore’s “Maquette for Three Standing Figures” could be three bathers.

Responding to “Selfie Man” (or vice versa) is Mr. Kentridge’s “Telephone Lady,” an intimidating linocut with gesso on canvas. Part figure at the bottom and old-school black-dialed antique phone at the top, it is like a modern-day centaur charging forth with an air of frenzy. It also manages to fit in well with its disparate neighbors around it.

In the front room a slightly different group of artists are set apart, with works like Ms. Rottenberg’s divine “The Cardio Solaric Cyclopad — Work From Home as You Get Fit and Tan,” a color photograph of a greased up, muscle-bound female figure sitting at a raised work station while pedaling in a cerulean blue fantasy background. Ms. Humphries’s untitled oil-on-linen painting provides lots of smiley emoticons to create patterns over her color abstraction. Mr. Mesler’s “Untitled (Nervous Wreck)” is a deep and superficial dive into the current human condition, both witty and trenchant.

The family assemblage in the back room is dominated by Mr. Schachter’s video art, which he uses to illustrate his Artnet columns, and the unusual Day-Glo striped fantasy animals of Ilona Rich, his wife. The walls show a mixture of his sons Adrian, Gabriel, Kai, and Sage with some still images and word compositions by Mr. Schachter in the blend. The installation is a riveting whole, using sheer volume to raise all boats.

With only days before both summer and the show are gone, it is worth stopping by for one last taste of the unique sensibility of the Hamptons art scene’s high season. The exhibition and gallery close for the season on Sept. 30.