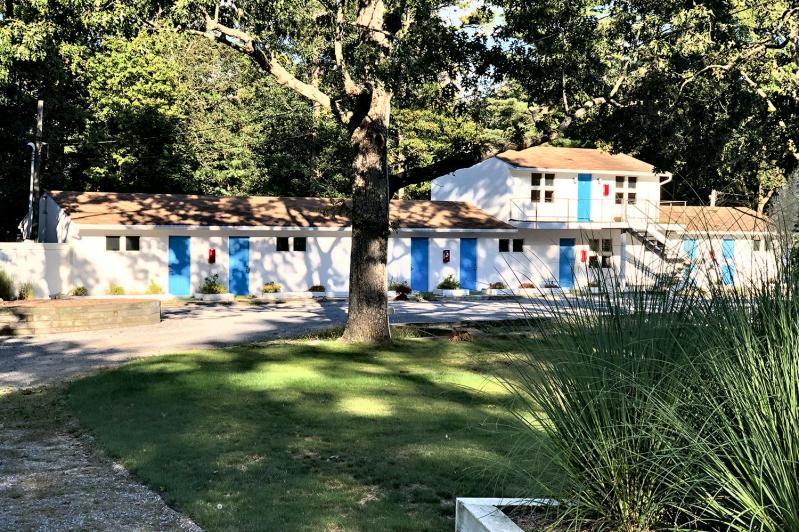 Before it closed, Forever Bungalows, at the edge of the woods in Sag Harbor, described itself as “a simple environment that encourages true escape.”
Carissa Katz
By Christine Sampson

Nothing lasts forever — not even the Forever Bungalows.

Beatrice Alda and Jennifer Brooke, owners of the boutique hotel on Route 114 between East Hampton and Sag Harbor, announced Sept. 2 on Facebook that they have sold it. A bright blue graphic with “Thank You” in looping yellow letters bid the bungalows’ friends and fans goodbye.

“ ‘Why’d you sell the hotel?’ people are now asking,’ ” Ms. Alda and Ms. Brooke wrote on Facebook. “ ‘We have other projects we wish to pursue that run counter to the amount of time and energy running a small local business requires,’ is what we say. We feel good about the decision, but it’s also hard to part with something we put so much of our creative energy into.”

Ms. Alda and Ms. Brooke are filmmakers who said they bought the bungalows to generate income that could possibly support their line of work.

“Our choices at the time included a bar about to change hands a few blocks from our house and a rundown motel just up the road,” they wrote. “The bar seemed potentially cool, but we knew nothing about that business and neither one of us were late night people or particularly good at dealing with drunks. The hotel seemed like a bigger project initially, but a potentially mellower and family-friendly genre in the long run.”

Before it closed, Forever Bungalows described itself as “a simple environment that encourages a true escape” with modern, hotel-style rooms and cottages. It offered Ping-Pong, cornhole, and tether-ball, rented bicycles, gave out beach passes, held occasional cookouts and movie nights, and hosted other filmmakers and artists. The Sag Harbor Creative Nonfiction Writers Conference was held there, and an indie film called upon the bungalows as a set. It had a 4.5-star rating on the travel website TripAdvisor.

Details on the sale, including its price, were not available by press time this week. The new owners could not be reached for comment.