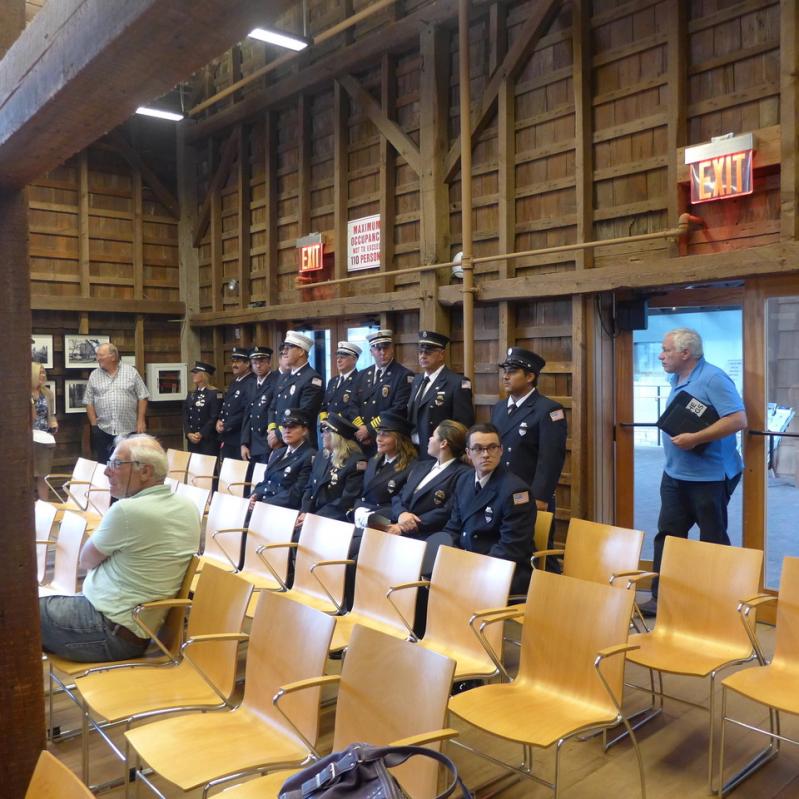 Firefighters, donning their dress uniforms after a Sept. 11 memorial ceremony, turned out for a hearing on the communications tower at the Springs Firehouse.
Jamie Bufalino
By Jamie Bufalino

A proposal from the Springs Fire District to remove an unutilized 150-foot-tall communications tower behind the firehouse on Fort Pond Boulevard, and replace it with a 180-foot-tall tower to improve radio and pager communications for fire, ambulance, and police personnel, came before the East Hampton Town Planning Board on Sept. 11.

A large contingent of firefighters attended the meeting to show support for the proposal. “They’re here because this application is a critical part of the backbone of the communications system,” said Carl Irace, an attorney for the fire district. “Our first responders and the community they serve need this upgrade.”

The existing tower was built in 2015 without site plan approval from the board. Due to that procedural lapse, the town’s Zoning Board of Appeals revoked its building permit, and it has remained unused. The fire district is suing the Z.B.A. over that determination.

Janine Brino, an attorney for the co-applicant, Elite Towers, which would  finance the construction and lease space from the fire district, said the company has been talking with the East Hampton Town Police Department about ways to improve emergency communications in Springs for the past two years, while litigation has been pending.

The proposed tower would house antennas, including a dish, and a “whip” antenna that would extend another 15 feet from the top. The equipment would allow emergency personnel to share information by voice and text in real time,  Mr. Irace said.

In October, aiming to upgrade East Hampton’s emergency communications systems, the town board resolved that no significant adverse environmental impacts would result from the installation of eight new communication towers in spots ranging from Montauk to Wainscott and Sag Harbor. In Springs, the board selected the Camp Blue Bay Girl Scouts camp on Flaggy Hole Road as its preferred spot for a 150-foot-tall tower.

Ms. Brino said Elite Towers is pursuing the Fort Pond Boulevard site out of a sense of urgency. The Springs Fire District, the board of fire commissioners, and the police “want whatever site is most expeditiously approved,” she said.

The proposed tower would eventually hold cellphone carriers, she said, but the application now before the board is focused solely on emergency communications. “We can’t speculate about future applications.”

Elite Towers has purposely pared down the proposal, said John Coughlin, another attorney for the company, based on advice from Supervisor Peter Van Scoyoc. “In a meeting with the town supervisor, we were directed not to pursue an application that would include the carriers, with the idea that that would be a more streamlined review,” he said.

“He mischaracterized what I said,” Mr. Van Scoyoc said yesterday. He had told Mr. Coughlin, he said, that the only way the town could expedite the tower’s construction was if it were solely for emergency communications. Elite Towers, he said, is being “disingenuous” by segmenting the application; that is, proposing an emergency communications tower now, and having cell carriers pay to be included on it later. “Clearly, Elite Towers isn’t going to build this tower for free,” said Mr. Van Scoyoc.

In a memo to the board, Eric Schantz, a senior town planner, detailed the more stringent standards required under town code for a cell tower versus one for emergency communications.  A cell tower, he said, would have to adhere to a “fall zone” restriction: No property line can be within an area equal to the height of the tower, and no habitable building or outdoor space where people congregate can be within two times its height.

According to the site plan for the proposed tower, “the property line is well within the fall zone of the pole, and it appears two residences on Talmage Farm Lane are either within the fall zone or very close,” he said. “But again, this is not being submitted to you as a wireless application, this is being submitted as a radio communication tower for emergency services, so those rules don’t apply.”

“For us to ignore that in our overall decision making is silly,” said Louis Cortese, and Ed Krug agreed.

Randy Parsons and Sharon McCobb said that the proposed tower would have to meet all the requirements of a cellphone tower before they would approve it. Samuel Kramer, the chairman, said the board could approve the communications tower, and later deny applications from cellphone carriers seeking to use it.

Board members were more inclined to have the tower at Camp Blue Bay. That location, said Eddie Schnell, a communications technician for the police department, would offer nearly identical coverage for emergency communications as would the one behind the firehouse.

Mr. Kramer asked the applicants to present a site plan for Camp Blue Bay at a future meeting, and to provide renderings of the 180-foot tower from various vantage points in Springs, including Accabonac Harbor and the hamlet’s historical district.