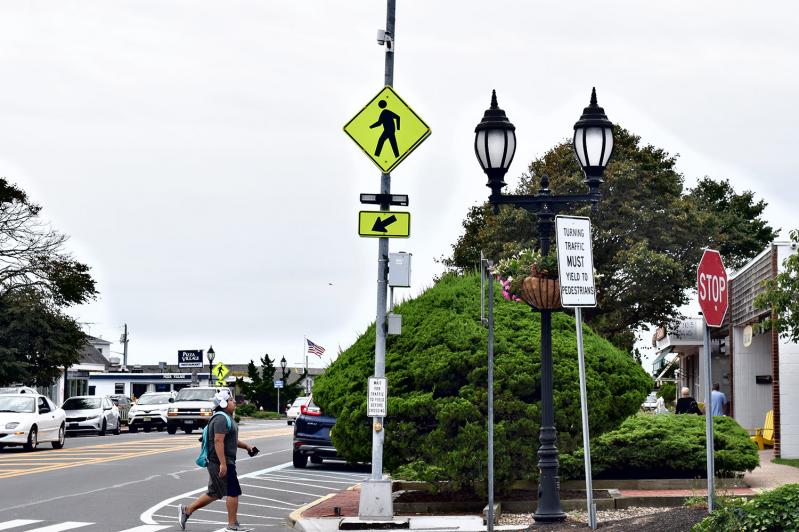 The road to hell, the adage goes, is paved with good intentions, but the three lighted crosswalks installed on Montauk’s Main Street earlier this year have created hellish conditions for motorists and pedestrians alike, the hamlet’s residents told the East Hampton Town Board on Tuesday.

With the summer tourists gone, the board’s work session at the Montauk Firehouse brought several residents eager to deliver an earful on what were referred to as “flashing disco lights,” “a fiasco,” “more detriment than asset,” “ineffective,” “unsightly,” and “inappropriate and aesthetically offensive.”

The sets of lighted crosswalks, mounted on tall poles on either side of the street and festooned with fluorescent yellow signs depicting a walking figure in one, an arrow pointing downward in another, and numerous flashing lights, were installed earlier this year and went into operation shortly before Memorial Day weekend, funded in part by a New York State grant and initiated under former Supervisor Larry Cantwell. Similar installations were added to Amagansett’s Main Street.

They are designed to be triggered by a camera mounted on the poles when a pedestrian enters the crosswalk. Montauk’s lighted crosswalks, however, have malfunctioned from the start, residents said on Tuesday. They flash when no one is in the crosswalk, and continue to flash long after a pedestrian has left it.

“We do not want these flashing disco lights,” said John Keeshan. “I don’t care how you fix them. The only way is to remove them.” He likened the crosswalks to another unwelcomed state effort, signs the size of small billboards bearing “Welcome to New York” messages. The signs were erected in 2016 and quickly removed after a public outcry.

Though well intended, the pole-mounted lights are visible across downtown, said Laraine Creegan, executive director of the Montauk Chamber of Commerce, whose office is steps away from one of them. Where similar pole-mounted lights are somewhat shielded by the mature trees on East Hampton’s Main Street, she said, “Here, it’s so wide open and they’re so high, you can see all the lights as soon as you come into the hamlet.”

The “disco ball crosswalk lights,” said Bonnie Brady, are ineffective. If the state wants to help, said Rory Finazzo, “they need to bring troopers out here to give jaywalking tickets.”

Mr. Keeshan told the board that pedestrians “challenge cars” by walking into the crosswalk and assuming they will stop, resulting in the unintended consequence of making crossing the street more dangerous rather than less. In the summer, there is often a constant flow of pedestrians in the crosswalks, which he said was unfair to motorists. “Not the way to intelligently manage traffic,” he observed.

For most of the year, Montauk Main Street needs neither lighted crosswalks nor crossing guards, Mr. Keeshan said, but he recommended crossing guards or traffic control officers for the summer months, particularly in the mornings and evenings. “You’ve done some very good things,” he told the board. “Keep it up — take down those poles.”

The testimony followed an email sent on Sunday by Tom Bogdan of the civic organization Montauk United, in which he asked residents to support Mr. Keeshan at the work session. “As the vast majority of Montauk citizens and visitors agree, the huge ugly blinking pedestrian crosswalk lights, installed on Montauk’s Main Street this past spring are not only inappropriate and esthetically offensive, but do not even come close to fulfilling their intended function of pedestrian safety,” he wrote. “Their flickering beam pattern begins far too soon and continues an inordinate length of time after pedestrian crossings. The over-lengthy period of time created has contributed to unnecessary congestion, and confusion of both driver and pedestrian alike. When added to the already heavy seasonal pattern of Main Street congestion, these lights are an authentic danger to both pedestrian and driver.”

Supervisor Peter Van Scoyoc agreed with the residents, calling the lighted crosswalks in their present condition “completely unacceptable.” They are too tall, too visible across the hamlet, and malfunctioned all summer, he said.

The crosswalks were discussed by the town board and Montauk’s citizens advisory committee for more than a year, he said. Overhead aboveground lights were initially selected because the less intrusive lights installed within the crosswalks in East Hampton Village have proved problematic, with damage from rain and snowplows resulting in high maintenance costs.

But in Montauk, “we felt the lights were mounted higher than they should have been,” the supervisor said. That will be addressed, he said, perhaps by shielding them so they are not visible beyond 100 feet. “Obviously,” he said, “they should only be flashing when somebody’s crossing.”

The most glaring issues, he said, will be addressed. “We’re going to focus on trying to correct” the problems, “and then reconvene.”