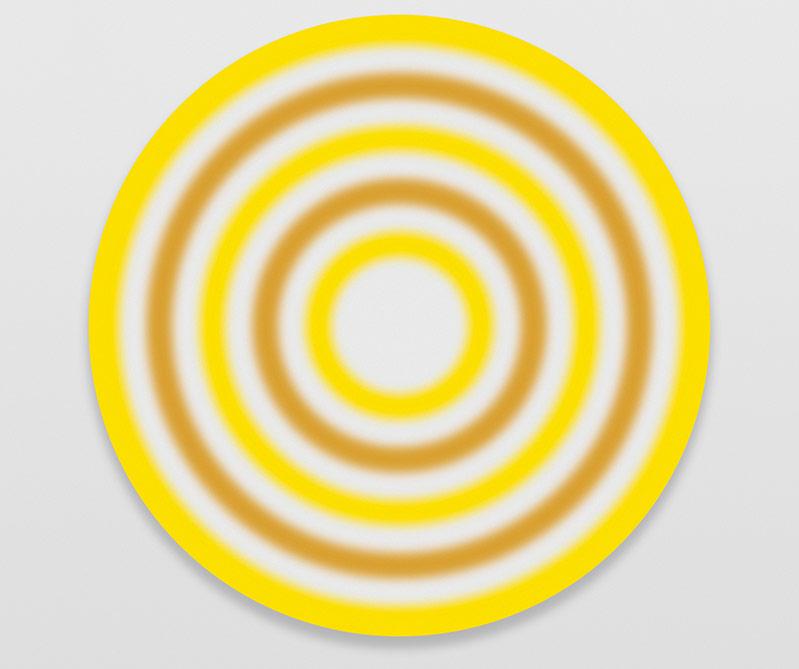 One of a new series of Ugo Rondinone’s “Sun Paintings” that will be shown at Guild Hall.
By Mark Segal

In these dark times of global unrest and uncertainty, Guild Hall has decided to bring a little light into at least our corner of the world with “Sunny Days,” an exhibition of work by Ugo Rondinone, a renowned Swiss-born artist with a residence in Mattituck.

“I had been watching his work for quite a while, and I went to his studio, which is in Harlem in an old church he renovated,” said Christina Strassfield, Guild Hall’s museum director and chief curator. “When I asked if he would be willing to do a show here he said yes, and he put forward the idea of sunny days, because he felt we really needed something uplifting now.”

While Mr. Rondinone has worked in a wide range of mediums, including painting, drawing, photography, video, installation, and sculpture, the Guild Hall show will focus on his sun paintings, which reference the radiance and universal symbolism of the sun, and a selection of large sun sculptures.

For the sun paintings, which first appeared in his work in 1991, he uses canvas or Plexiglas plaques spray-painted with soft, airbrushed concentric rings. The eight paintings in the exhibition are being shown publicly for the first time.

The sun sculptures are large-scale rings made from vine branches that have been cast in bronze and then gilded. The artist chose the vine as a symbol of renewal because of its life cycle from growth to dormancy to rebirth every year.

As he has done during exhibitions in Rotterdam, Shanghai, Rome, and elsewhere, Mr. Rondinone has invited children from East End schools and daycare centers to help him create a gallery of sun drawings, which will be displayed salon style.

“I think Ugo approaches life in a sort of organic and universal way, and I find that very interesting,” said Ms. Strassfield. “The exhibition is a great opportunity to showcase his work to a lot of people who might not have been that familiar with it.”

Mr. Rondinone moves fluidly between figuration and abstraction and two and three dimensions. Among his best-known works is “Seven Magic Mountains,” a large-scale site-specific installation in the Nevada desert consisting of seven towers of colorfully painted stacked boulders rising more than 30 feet above the desert floor. He has also created the rainbow-hued sculptures in Miami Beach, at the Tate Liverpool, and elsewhere.

In stark contrast to the mountains is “Vocabulary of Solitude,” an installation of 45 life-sized clowns made from milled foam and epoxy resin, modeled from men and women of various ages and ethnicities, which he showed at the Bass Museum in Miami Beach.

A preview of the exhibition will kick off Guild Hall’s Summer Gala tomorrow at 5 p.m. Cocktails will be served at Mulford Farm from 6:30 to 8, and dinner will follow at the same location. Bob Colacello, the former editor-in-chief of Interview magazine, will be the evening’s M.C., and the Suffolk County Youth Choir will perform. Tickets start at $1,400, $500 for patrons 40 and under.

“Sunny Days” will open to the public on Saturday, when a conversation between Mr. Rondinone and Bob Nickas, a critic and curator who wrote an essay for the exhibition brochure, will take place at 4 p.m. A reception for Guild Hall members will follow at 5, and the show will run through Oct. 14.