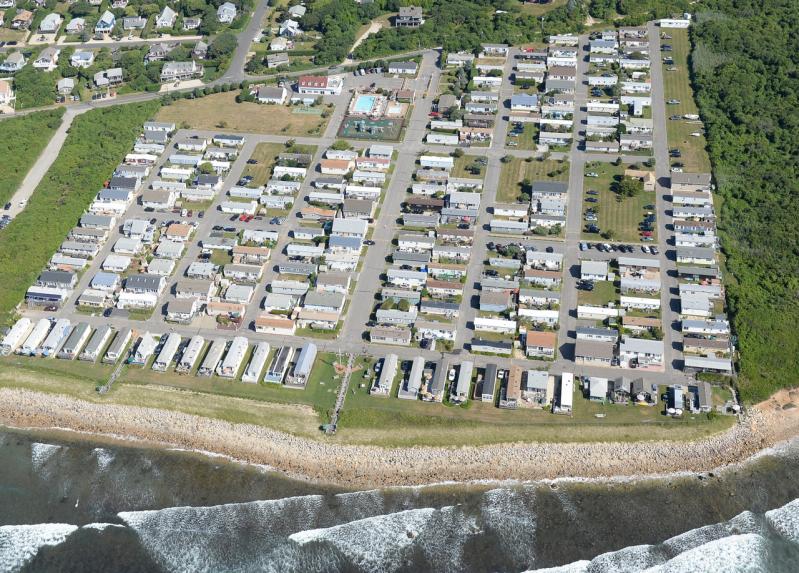 Further expansion of units at the Montauk Shores Condominium has run up against the East Hampton Town Board.
Doug Kuntz
By Christine Sampson

As a debate ensues over the function and capacity of the septic system at the Montauk Shores Condominiums mobile home community, a Suffolk County agency is reviewing applications for redevelopment of two units there — the scope of which is also in question.

East Hampton Town Supervisor Peter Van Scoyoc sent a letter to the Suffolk County Department of Health Services Board of Review opposing variances that would allow the owners of units 704 and 613 to install “larger mobile units with greater daily flow rates on a site that already exceeds the population density requirements of the Suffolk County sanitary code.”

The letter, dated July 22 and obtained from the town by The Star on Monday, says a 2017 survey identified the septic system at Montauk Shores as over capacity. It treats more than 45,000 gallons of wastewater per day, according to the letter, but is only equipped to handle up to 26,524 gallons per day.

In a recent interview, Philip Andriola, vice president of the board of managers for the Montauk Shores Condominium Association, disputed the town’s claim, saying the septic system there is functioning well and within its normal parameters. The mobile home park in April applied to the county for a large-scale sewage treatment facility.     Mr. Van Scoyoc’s letter says East Hampton does not recognize the Montauk Shores units as separate from one another. He cited a section of the town code pertaining to mobile home parks that says, “The subdivision of the land so that individual spaces constitute lots shall not be permitted."

However, Mr. Andriola disagreed with Mr. Van Scoyoc’s assertion, saying people own individual, deeded lots there and have the same property development rights that other homeowners in town have.

“We go to the town as an individual owner as part of a bigger system,” Mr. Andriola said. “If a builder builds a development, each of those homes are there but the master plan was put in by the developer. Whenever a [Montauk Shores] homeowner applies for a variance or an improvement, they do it just as any other homeowner in the Town of East Hampton would.”

Additionally, owners are taxed individually by the town, Mr. Andriola said, rather than the town taxing the community as a whole.

Mr. Andriola also disagreed with Mr. Van Scoyoc’s assertion that two units are seeking to expand, and said there are actually three mobile home owners who want to simply replace “in kind” what was already there. He said the existing system’s output already takes into account wastewater flow from the units that owners are seeking to replace, and that the newer ones would be more efficient than the older ones.

They “have homes that are deemed unlivable for various reasons” such as mold or structural instability, Mr. Andriola said. He acknowledged there is a moratorium on development in place at the mobile home park, but said the homeowners seeking to improve their units closed on their purchases just before or at about the same time the moratorium was enacted.

Mr. Van Scoyoc indicated in his letter to the county that “our Natural Resources Department informed the [County] Health Department that the town will not issue building permits for either unit until the entire complex has a sewage treatment system approved and installed.” However, his letter notes the county’s response that “individual variance applications are allowed to be processed as residential units.”

“East Hampton Town and the Suffolk County Health Department share a common goal: the protection of the health and safety of our residents, and protection of the environment,” Mr. Van Scoyoc wrote. “How issuing variances to individual unit owners at Montauk Shores, allowing expansion, when the septic waste generated at the site is already well beyond the existing system’s capacity, aligns with those goals is impossible to understand.”

In an email to The Star, Grace Kelly-McGovern, a spokeswoman for the Health Department, said the board of review’s variance decisions for the two units are “pending.” A hearing was held July 25; its minutes were not available by press time this week.

Ms. Kelly-McGovern said Montauk Shores still needs to provide some information to the county on its wastewater treatment facility application.

“There are many outstanding items for approval of the application,” she said, “including payment of the application fee, submission of revised site plans, submission of technical specification and detailed plans,” and approvals from the county’s office of pollution control and office of water resources. She said that because the development consists of multiple condominium units with different owners, approval from the Department of Public Works is also required.

“The Suffolk County Department of Health Services strongly supports the replacement of the existing septic system at Montauk Shores with a new treatment facility that will better protect the environment, and encourages the owner to move forward quickly to complete the application process so that [the Health Department] can issue a permit for the project,” Ms. Kelly-McGovern said.