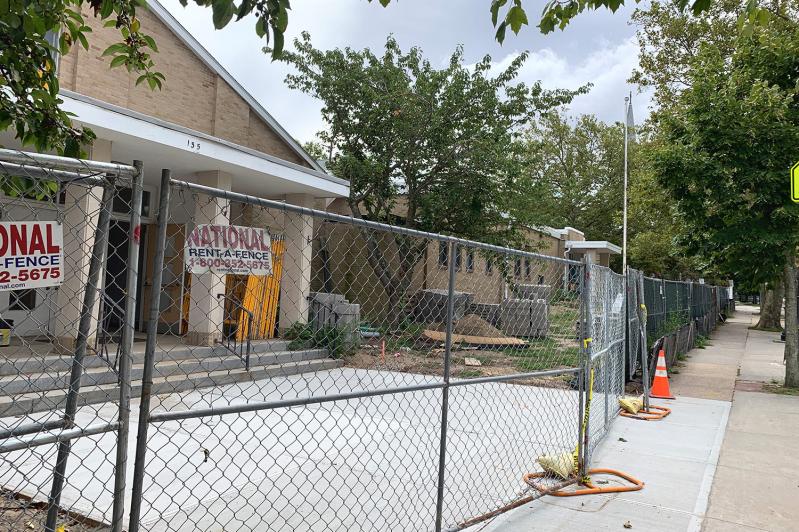 The Sag Harbor School District’s renovation of the former Stella Maris School came up against construction delays and will not open until November.
Taylor K. Vecsey
By Christine Sampson

The Sag Harbor School District may not move its prekindergarten classes to the new Sag Harbor Learning Center until mid-November because construction there is still underway, officials said Monday night.

The move was originally planned for the beginning of the school year.

The renovation of the former Stella Maris Regional School as a center for early childhood public education, along with the school business offices, kicked off in April. On Monday, Ed Bernhauer of IBI Group, the district’s architectural and engineering firm, said several components have been delayed, including security doors and fire alarms.

During an Aug. 12 board meeting, Katy Graves, the district superintendent, said the project was still on schedule for student occupancy in September. On Monday this week, however, she said that she had informed the school board in mid-July that there were some delays and intentionally did not publicize it more widely.

“If we made it public, none of the other construction companies were going to show up,” Ms. Graves said Monday. “We have, and I will take all the blame for this, not being transparent. . . .”

She later continued, “Eighty-five percent of the electrical and 85 percent of the plumbing are all done. The roughing out of the entire building is done. The work that the board approved in the gymnasium is done in large part because they didn’t get word that there was a large delay, because we would have seen there was a greater delay. This board was kept informed of that delay. . . . I did delay that information and I’m proud I did it because I kept my foot right on the gas pedal at the construction meetings.”

Chris Tice, a board member, said during the Monday meeting the board had known about some issues, but said “it was the five other areas of delay that I heard about for the first time today.”

Jordana Sobey, the school board president, said in an email yesterday that earlier this month, “there was still hope expressed that [the learning center] might be able to open on time.”

“Given that the impact of any delay on students would be fairly minimal (i.e., it only impacts the prekindergarten that is otherwise comfortable in their dedicated Pierson classrooms) it seemed appropriate, based on the information given to the board, to be deferential to our superintendent in this situation given that her reasoning was based in the district’s best interests,” Ms. Sobey said in her email.

Ms. Graves said yesterday that the project “has always been about the children.”

“I’m very sad that it has been delayed, which was largely around all the safety we built in,” she said. “Times have changed and we’re asking for some very high-end technology. That takes a lot.”

“My hope is that our community will be as excited as we are to see this new building done, and done right,” she said.

Mr. Bernhauer pledged that an updated construction schedule would most likely be provided by the board’s next meeting on Sept. 9. Yorgos Tsibiridis, a board member, requested regular construction updates at each meeting, and Mr. Bernhauer agreed.

In an Aug. 20 letter to Sag Harbor Elementary School parents, Matt Malone, the principal, said that “crews continue working to transform the building into a beautiful learning space that will support the Sag Harbor pre-K for many years to come.”

The prekindergarten students will start the year off in the two classrooms they have long occupied at Pierson Middle and High School. “These classrooms have supported our program for many years and will continue to provide a wonderful learning space for our pre-K program for as long as needed,” Mr. Malone wrote.

Voters in Sag Harbor okayed buying the former Catholic school property from the Diocese of Rockville Centre by approving a $10.23 million bond in May 2016. That amount included $6.33 million for renovations, of which $5.5 million was for hard construction costs. Since then the school board approved spending an additional $1.6 million in surplus money, including $1.3 million to prep the building before construction started and $348,239 for upgrades beyond the scope of the initial project.

In other Sag Harbor school news, the school board on Monday approved spending $19,940 to repair and waterproof the clock tower at Pierson.

Ms. Graves said the cost of food has gone up, particularly since the district is sourcing a lot of its food locally. Free and reduced-price lunches are available to students based on family income. About 23 percent of students in the district are taking part in that program, according to Ms. Graves.