The tree cutting stopped, but the property was ‘obliterated’ 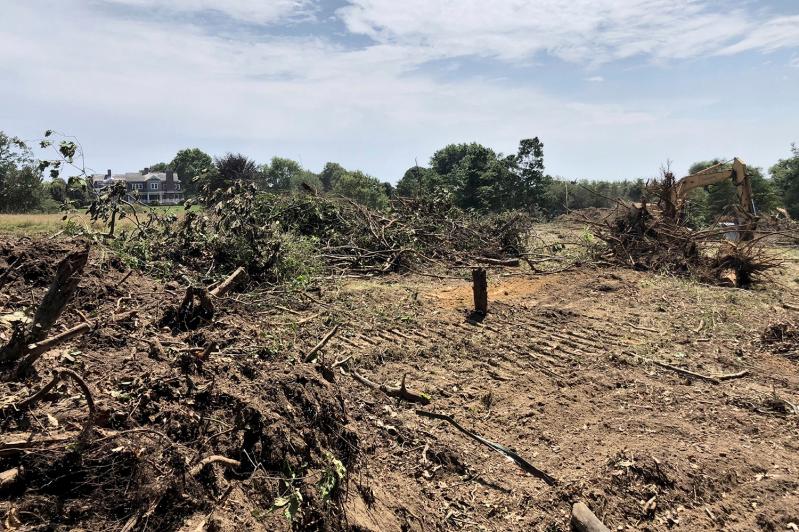 Scores of trees were cut down last week on nearly six acres of Amagansett land protected by a conservation easement.
Peconic Land Trust
By Jamie Bufalino

After what the Peconic Land Trust described as “one of the most egregious violations of a conservation easement in the trust’s 36-year history,” the organization won a temporary restraining order last Thursday to stop the owners of nearly six acres of reserved land in Amagansett from continuing to cut down trees on the property.

According to a legal complaint filed by the land trust, the property near Stony Hill Road, which is protected in perpetuity by a conservation easement granted to the trust, was purchased on July 31 by a limited liability company whose principal is Randy Lerner. Mr. Lerner, the former owner of the Cleveland Browns football team, holds several Amagansett properties, including Amagansett Square.

Within days of acquiring the property, the complaint said, the owners had hired crews from Marders nursery to cut down 75 to 125 trees, many of which were decades old.

“We are seeking the immediate cessation of removal activities, and the full restoration of the property,” said John v.H. Halsey, president of the land trust.

The easement prohibits the removal of trees, shrubs, or other vegetation from the reserved area unless they are “dead, diseased, dangerously decayed, or damaged.” Only “historical modes” of landscaping, pruning, and grounds maintenance are allowed on the property.

In an affidavit filed with the court, Matthew Swain, director of stewardship at the land trust, said the cut trees had been healthy, tall, and mature. Furthermore, the land trust said, the cutting could not be considered a historical mode of landscaping, nor was it in keeping with the easement’s allowance for the construction of agricultural structures.

The property’s easement dates to 1995, when the owners at the time, Job Potter, who later served as an East Hampton Town Councilman, and his sisters, Madeleine Potter and Gayle Potter Basso, agreed to restrict the use of the land to keep it in its “open, undeveloped, and scenic state.”

The Potter family, according to the legal complaint, sold the property to Robert Rosen in 1996. There had never been a previous violation of the easement, the land trust said, until Mr. Lerner’s company purchased the land this year.

Concerned neighbors had alerted the land trust to the tree cutting on Aug. 6. Later that day, Ellen Fred, a lawyer for the organization, informed Denise Schoen, a lawyer for Mr. Lerner’s L.L.C., that such activity was prohibited on the property.

According to Ms. Fred, Ms. Schoen had confirmed in a telephone conversation that Mr. Lerner had requested the cutting.

“I asked defendants to stop operations, and to allow us to inspect the easement property to determine if there was any basis on which the cutting of the trees could be justified,” Ms. Fred said in an affidavit.

Ms. Schoen agreed to allow an inspection, said Ms. Fred. Ms. Schoen and Tiffany Scarlato, another lawyer for the owners, had told her their clients would stop cutting down trees.

“We relied on these representations and delayed making the instant application for injunctive relief,” Ms. Fred said. “Defendants did not stop the cutting and removal of trees, despite the representations of their counsel.”

Neither Ms. Schoen nor Ms. Scarlato responded to requests for comment.

Ms. Fred and Mr. Swain visited the property on Aug. 7. According to Mr. Swain, Fred Friedler, a representative of the owners, refused to let them inspect the premises, and called the police.

“When the police arrived, they read the conservation easement and allowed us to walk on the perimeter of the property, and to photograph what was going on,” said Mr. Swain.

In addition to the 75 to 125 felled trees, which ranged in height from 50 to 100 feet, he said, there were approximately the same number of trees lying nearby or being dragged and stacked by a crew from Marders. Other Marders employees, he said, were removing stumps.

While he and Ms. Fred were at the property, he said, Leonard Benowich, another lawyer for the land trust, sent a cease and desist letter to Ms. Schoen and Ms. Scarlato.

“I received no response to that letter from either counsel, except Ms. Scarlato sent me an email saying ‘Thank you. We will be in touch shortly,’ ” Mr. Benowich said in an affidavit. “I never heard from her again.”

In its suit, the land trust is asking for a legal declaration that the owners are in breach of the easement. It is also seeking a permanent injunction that would require the owners to fully comply with the easement, including a provision that allows the organization to inspect the property, and it wants the owners to pay to remedy the violations and restore the property to the condition it was in at the time the easement was granted, or at least prior to their ownership.

If the owners fail to restore the property, the land trust is seeking permission to do so at the owners’ expense.

“The reality is what was there was obliterated,” said Mr. Halsey on Tuesday.  The land trust, he said, has been photographing and documenting the property annually since 1995. “I don’t think it’s possible to fully restore it, because a lot of the trees were very mature,” he said.

Enforcing easements will be an ongoing priority for the land trust, he said, because as properties continue to be sold and ownership becomes further removed from those who granted the protections, the potential for violations will increase.

In this case, he said, the land trust was fortunate to have been alerted to the cutting by residents. “It’s a good reminder to all of us of the importance of vigilance,” he said. “Neighbors are our eyes and ears.”