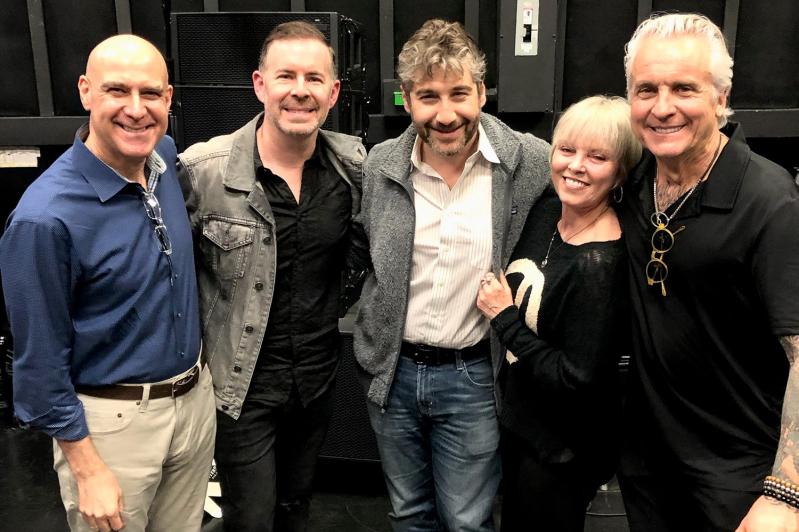 Love is indeed a battlefield. Pat Benatar sang about the bumpy path to romance and passion in her 1983 chart-topping hit, while a few centuries earlier Shakespeare wrote about it in his most popular of plays, "Romeo and Juliet.”

These two powerhouses of music and literature will collide tomorrow and Saturday at Mashashimuet Park in Sag Harbor, in “The Romeo and Juliet Project,” a free Bay Street Theater and Guild Hall production that is part of Bay Street’s annual Under the Stars series. Ms. Benatar is the writer, composer, and co-producer along with Neil Giraldo, her husband of 37 years. Bradley Bredeweg wrote the book for the show.

“It’s really relevant to today,” an excited Ms. Benatar said over the phone. This mash-up of blockbuster music and Shakespeare’s epic story of star-crossed lovers has been “reconstructed and orchestrated into musical theater,” she said.

The project began about four years ago, when the husband and wife duo began writing a biographical musical featuring “the Pat and Neil story,” Mr. Giraldo said, adding that many of the songs the pair have produced during their decades-long partnership seemed to match well with the story of “Romeo and Juliet.”

By the time they had finished working on the project, however, the genre felt a little passé, Ms. Benatar said. It was then that they met Mr. Bredeweg, “a generous, daring, and creative writer,” who had created a rock opera dinner theater version of “Romeo and Juliet” in Los Angeles that incorporated popular 1980s music, including several Benatar and Giraldo hits.

Mr. Bredeweg is known for his partnership with Madonna and her Maverick Films company. Together, they developed and wrote his first passion project, “Alyx,” a TV movie about a famous musician who abandons the spotlight in order to pursue a normal life. He is also one of the creators and executive producers of the television series “Good Trouble,” a spinoff of the Freeform series “The Fosters.”

When Ms. Benatar and Mr. Giraldo heard about his rock opera, they invited him to meet up in New York City and discuss the possibility of collaborating. About a year later, “The Romeo and Juliet Project” was born, expanding his dinner theater show by featuring not only Ms. Benatar’s hits but also “hidden parts of songs and deep cuts of our recordings,” Mr. Giraldo said.

In writing the dialogue for the musical, Mr. Bredeweg focused on putting a modern twist on Shakespeare’s tale by weaving in real-life aspects of Ms. Benatar and Mr. Giraldo’s romance, which blossomed during the male-dominated rock ’n’ roll era of the 1970s and ’80s.

But the Romeo-and-Juliet-Pat-and-Neil story needed a stage. They had held two readings, one in New York and another in Los Angeles, but only for a select group of 20 or 30 guests, Ms. Benatar said. They decided it was time for “The Romeo and Juliet Project” to be unveiled in front of a general audience.

“About a minute after meeting Scott Schwartz, we knew he was the right guy for this,” Mr. Giraldo said, referring to Bay Street’s artistic director, who will direct the outdoor musical.

Will Ms. Benatar perform in the show?

“No,” she said, to the disappointment of this writer and surely to a great many of her fans on the South Fork. On Monday, she and her husband performed a sold-out show at Bay Street as part of a 40-year anniversary tour, featuring their collection of hits in stripped-down, acoustic versions.

“Well, maybe sometime in the future I’ll get onstage and join ‘The Romeo and Juliet Project,’ ” she said. For now, 14 actors who have been rehearsing for a year will perform, adding a new dimension to her work.

“It’s been turned into something truly amazing,” she promised.

“But the ending is a mystery,” Mr. Giraldo added.

“The Romeo and Juliet Project” will be onstage in Mashashimuet Park tomorrow and Saturday at 7 p.m. The show is free, but seating is limited so reservations are required. Tomorrow only, a reserved V.I.P. seating area will be available for $85 per person or $150 per pair. Those tickets include a chair, a charcuterie box, and a choice of wine or water.