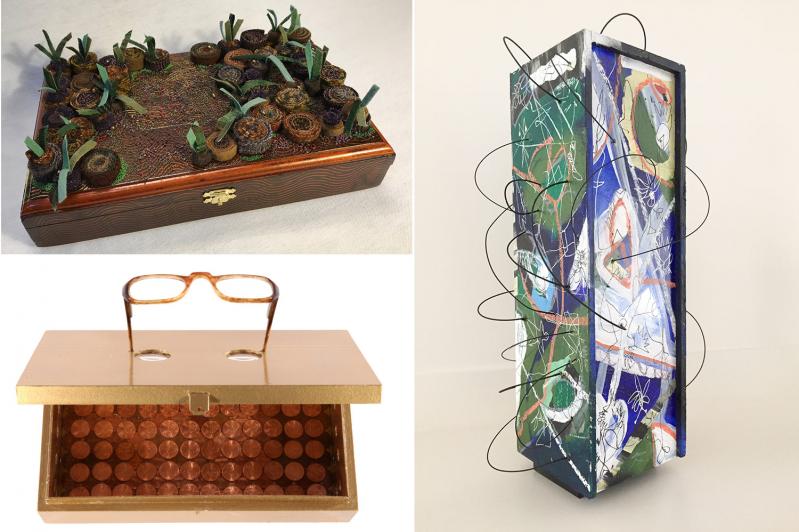 Among this year’s inventive creations are boxes by, clockwise from top left, Tracy Jamar, Fulvio Massi, and Rossa Cole.
By Mark Segal

To paraphrase a radio ad for Stuart’s Seafood in Amagansett, a lot has changed during the past 20 years, but one thing hasn’t. In 2000, East End Hospice first asked 100 local artists to transform small, unadorned boxes into works of art. Ever since, the call has gone out and the artistic community has responded. This year’s result can be seen on Aug. 24, when the silent and live auctions of some 90 boxes will take place at Hoie Hall at St. Luke’s Episcopal Church in East Hampton.

At the Aug. 24 benefit, the silent auction will begin at 4:30 p.m. and the live auction will follow at 5:45, with Lucas Hunt as auctioneer. The $75 ticket price includes wine and hors d’oeuvres.

The East Hampton Lions Club will receive the 2019 Spirit of Community Award for its generosity to East End Hospice and other resources in the community.

Every spring, Arlene Bujese, the benefit chairwoman, invites artists to pick up donated cigar or wine boxes and alter them however they choose. This year’s artworks incorporate ceramics, sculpture, painting, collage, assemblage, and needlework on fabric.

All proceeds from the event benefit East End Hospice, which provides care for terminally ill patients and their families living on the North and South Forks, including the eastern Suffolk County townships of Brookhaven.