East Hampton Village loses one spot, but Bridgehampton and Water Mill have none whatsoever 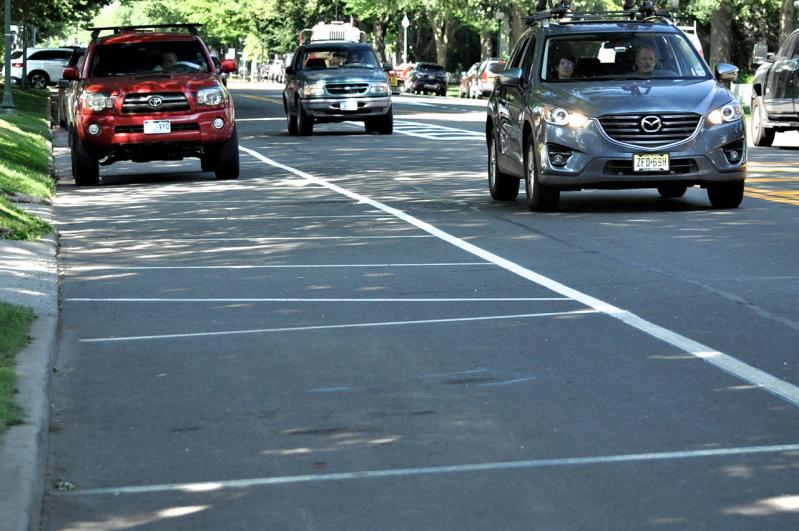 Faint blue lines were all that remained of a handicapped parking space on Montauk Highway used by many East Hampton Library patrons.
David E. Rattray
By Cecelia H. Scheuer

A patron approached the East Hampton Library’s front desk earlier this year wondering about parking in a spot painted half-white, half-blue near the front entrance on Main Street.

For years, drivers with handicapped placards have favored the space for easy access to the library and Guild Hall across the street. Now, suddenly, the Handicapped Parking sign was no longer there.

The librarians inquired from village police, only to discover that one of five handicapped parking spots along Main Street in East Hampton Village had vanished without explanation.

Why was the space eliminated? The question not only produced few answers, but revealed a breakdown between state and local government regarding the maintenance of Route 27/­Montauk Highway, a state-owned road. Neither state nor local authorities could do more than speculate about who removed the spot or why, indicating that there may be no one in charge.

East Hampton has it good when compared to other South Fork commercial centers along Montauk Highway. From Water Mill to Montauk, the number of handicapped spots along the main streets of the business districts ranges from zero to five. Water Mill itself has exactly none.

Even more surprising, Bridgehampton Main Street, a major transit route and business district boasting far more stores and restaurants than Water Mill, also has no on-Main-Street parking for people with disabilities. The only nearby handicapped-accessible spots in the hamlet are in a back lot across from the Hampton Library, and in another bounded by Thayer’s Hardware and the Golden Pear. Both lots are owned by Southampton Town. Amagansett has four on-street spots, one fewer than East Hampton Village, and Montauk has three.

A bouncing ball of responsibility makes it unclear who is accountable for enforcing the Americans With Disabilities Act when it comes to handicapped parking, or even if the act applies to state roads at all.

Southampton Town Superintendent of Highways Alex Gregor said last week that he did not know anything about a handicapped parking prerequisite “on street” — in the case of Bridgehampton Main Street, he said, because of crosswalk requirements that limit general parking.

“The problem with on-street parking is that with these crosswalks, you lose a lot of spaces, to provide pedestrian visibility,” Mr. Gregor said.

“It’s easy enough for us to put it back,” said Barbara Borsack, an East Hampton Village trustee, though that may be questionable. It was possible, she suggested, that the village’s Department of Public Works might have removed the library spot to allow for more on-street parking, given that the library boasts two handicapped-accessible spaces in its back lot. David Collins, the department’s new superintendent, did not return a call for comment.

Whoever removed the spot for those who are physically impaired, coming from the back lot makes for a long walk to Guild Hall and other buildings on Main Street.

Blue-painted parking spaces allow people with physical impairments to get into or out of a vehicle as close as possible to where they need to go, an entitlement protected under the A.D.A.

“My real issue with [the loss of the library spot] is that nobody was informed,” said Tom Ruhle, East Hampton Town’s housing director. (Glenn Hall, president of the East End Disabilities Group, noted that East Hampton Village had conferred upon Mr. Ruhle the technical title of A.D.A. coordinator for the town, deeming him “the next closest person to being able to deal with disabilities for the Town of East Hampton.” Mr. Hall said that were it not for Mr. Ruhle, who has taken on what he said should be a full-time job in addition to his actual full-time job, there would effectively be no one responsible for enforcing handicapped accessibility in East Hampton.)

Perhaps most peculiar about the library spot’s removal is that no one knows where it disappeared to, or why. If its disappearance was unnecessary and if it can be blamed on the state, then the question is what warranted the removal of a spot many handicapped drivers depended on.

Last September, the state came in and added a steep incline to a new Amagansett crosswalk on Montauk Highway between St. Michael’s Housing and the I.G.A., without informing town officials. The incline was not compliant with federal statutes for curb ramps, which are required at such intersections to provide smooth transitions between crosswalks and sidewalks for pedestrians with mobility restrictions.

Workers came back to fix the crosswalk following an outcry, but both Nancy Peppard, a member of the town’s anti-bias task force, and Mr. Hall maintain that it is now in even worse shape. “I can’t even begin to describe the total screwup of the state at the crosswalk,” Mr. Hall said. “A.D.A. legislation is nothing but symbolic unless you go to court.”

The apparent lack of town or state involvement in providing accessible parking along Montauk Highway begs the question of whether there are standards states must follow for installing these spaces, and who is responsible for enforcing them. The New York State Department of Transportation seems to have delegated the responsibility to municipalities or local businesses seeking to ensure that their facilities are A.D.A.-compliant.

Stephen Conzoneri, a public information officer for the state D.O.T. said he was not familiar with any guidelines that might outline the state’s responsibility for the issue. As to the library spot that vanished, East Hampton Village Clerk Becky Molinaro Hansen said “the village has no record of, and did not do any restriping” in the spot’s former location, She did emphasize that it was located on a state road not under the jurisdiction of the village.

Local governments, it would appear, consider that their oversight of handicapped parking applies only to village or town-owned facilities and public parking lots.

“Anybody over the age of 50 in this town is an orphan,” Dr. Peppard, who is from East Hampton, said. “They do nothing for us.”

Another problem, Dr. Peppard said, is the growing misuse of handicapped-parking spots. Last week, she said, she watched as a van without a placard parked in a handicapped spot in front of the East Hampton Cinema. When she walked over to take a picture of the license plate, the driver got out. She told him he was parked in a restricted spot and that there was an open space a short ways away, to which he responded that it was none of her business and proceeded into the movie theater.

With the disappearance of the spot out front of the library, East Hampton Village is left with five on-street handicapped-accessible spaces. For permanent disability plate-bearing drivers like Dr. Peppard, who has to arrive early to most places to get where she needs to be on time, the dearth of spaces on these main routes makes life increasingly difficult.

“Everyone becomes disabled eventually — this isn’t an us-versus-them issue,” Mr. Hall said. “This is not black or white, or man or woman. This is civil rights for everybody.”