Subdivision will be a departure for the village 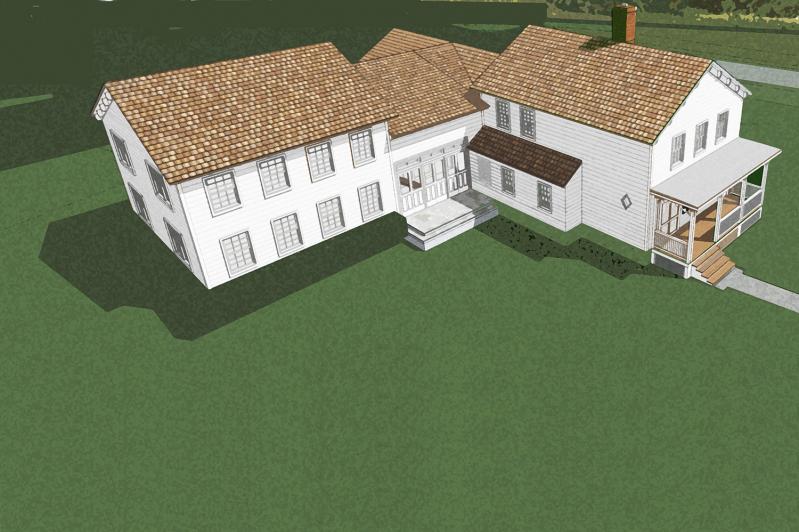 A rendering of what the historical Stephen L. Hedges farmhouse will look like after its restoration.
Frank Crivello/Blue Prints Architecture
By Jamie Bufalino

More than six years after the project was proposed, Hook Mill Estates, a subdivision with 11 house lots on 10.5 acres off Accabonac Road in East Hampton Village, will soon be on the market.

Russell Blue, the founder of Blueprints Architecture in Water Mill, the firm designing the houses for Thomas Prendergast, a real estate developer who owns the property, said Hook Mill Estates would be “the biggest residential development in the village in about 30 years.”

The property is notable in part because of its proximity to the village’s commercial center and because the historical Stephen L. Hedges farmhouse, which will need some restoration, stands as sentry on its western edge.

A site map has been approved by the village planning board, and a design for a show home has been drawn. The only delay, apparently, is the creation of Therese Court, a new street leading into the development.

Mr. Blue has been designing residential and commercial buildings on the East End since the late 1980s. He recently helped revamp the defunct Princess Diner in Southampton into the new Silver Lining Diner. He also has been retained by Christ Episcopal Church in Sag Harbor to design a cafe at which free weekly meals will be served to the needy. Christ Church is a host facility for Maureen’s Haven, a nonprofit that helps find shelter for the homeless, and Mr. Blue is on the charity’s board.

Restoring the Stephen L. Hedges house involves lifting it, shoring up its foundation, and replacing a leaky roof, said Mr. Blue. A 1,500-square-foot addition will be added to the back of the house, in which Mr. Prendergast plans to live. Otherwise, the exterior (including the windows) will remain as is. While the house will mark the subdivision, the new houses, Mr. Blue said, will be “set back from the road and well screened, so you’re not going to be able to see them.”

The houses were initially going to be designed in various styles of early American architecture, but instead, said Mr. Blue, they will be contemporary and feature cutting-edge technology.

“The walls are going to be immersive 8K screens,” he said, referring to ultra-high-definition, which makes images seem “as real as they can get without being there.”

“But these are not going to be McMansions,” Mr. Blue said. “We’re not looking to destroy the character of the neighborhood.”

Each room will be able to have a flexible floor plan: a kitchen with movable components, a master suite with a bed that recedes into a wall, an outdoor deck that, at the push of a button, becomes partially enclosed.

Some of the houses will be built on spec and others will be customized for potential owners. Their primary appeal, he said, will be the technological “bells and whistles” and the proximity to the commercial district and beaches.

He speculated that prospective buyers might already be living close by. “Because they’re going to be so state of the art, someone who already has a home out in the woods in East Hampton might buy one as a kind of play home. That way they could be in the village at night,” he said.

Mashashimuet Park's History and Future
A Conference for Young People to Create Solutions
Get Outside, Get Moving
END_OF_DOCUMENT_TOKEN_TO_BE_REPLACED