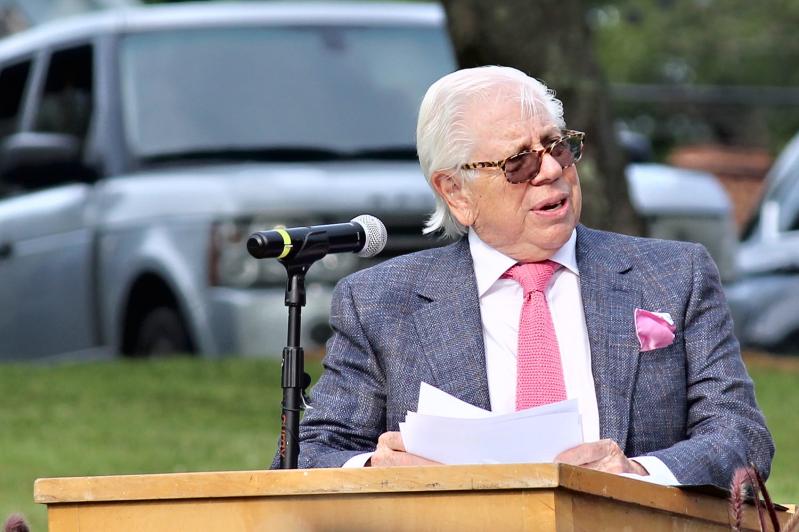 Hannah Tuma, Pierson High School’s valedictorian, urged her classmates to continue taking risks. Emily Hallock, the salutatorian, called on the seniors to be passionate and set a good example for others. And Carl Bernstein, the veteran investigative journalist and keynote speaker during Saturday’s graduation ceremonies in Sag Harbor, had a lot of his own wisdom to share.

“Seek out the best information, the best obtainable version of the truth.”

“Don’t be too polite, cause some trouble if you think it’s the right kind of trouble. Courageous trouble, adventurous trouble.”

“Don’t forget to sing in the shower.”

Mr. Bernstein, along with the administration of the Sag Harbor School District and hundreds of relatives, friends, and community members, congratulated Pierson’s 66 graduates on Saturday.

Dozens of students received scholarships, totaling more than $174,000, donated by community groups such as the Lions Club, the Kiwanis Club, the Sag Harbor Fire Department and its Ladies Auxiliary, the Southampton Hospital Association, and the Noyac Civic Council, among others. Christopher Capalbo was the recipient of this year’s prestigious Principal’s Award, for “courage, kindness, and sensitivity.”

The 2019 graduation ceremony was the last for Katy Graves, the district superintendent, who has plans to retire

in the coming months. Afterward, she wished the graduates luck.

“I couldn’t have left with a more wonderful, more thoughtful class,” she said. “It was a beautiful ceremony. I want to thank Carl Bernstein for all of his spirited, insightful comments to our class. He said, ‘This is more hometown America than the Fourth of July,’ and I couldn’t agree more.”

The rain initially forecast for Saturday held off as long as it needed to, and the hot sun bore down as the senior class — many looking sharp with sunglasses on — absorbed what the speakers had to say.

“Class, we are the future,” Emily, the salutatorian, said. “We are tasked to be the leaders of tomorrow, but our impacts start today. We may be young, but we are passionate. I’ve seen my classmates stand up for what they believe in, whether it’s women’s rights, school safety, or even turf fields. Regardless of what the issue is, the most important thing is to have passion. People may disregard your stance because of your age, but it is important to not let this put you down.”

She urged her classmates to be mindful of what they say not just orally, but also on social media. “Please be careful of what you say and do, and strive to be a good example for those around you,” Emily said.

Hannah, the valedictorian, described the senior class as risk takers and called on them to continue to do so later in life. She said the students are all in control of their own destinies.

“We took on many challenges, and as we did that, we grew closer together,” she said. “We were taking risks just by choosing to put ourselves out there. With this being one of the most competitive years ever in college admissions history, some of our admissions decisions weren’t what we wanted or expected. However, we didn’t let this stop us. If we were knocked down, we stood back up.”

When it was his turn to speak, Mr. Bernstein, who lives on North Haven, told the students he barely made it through high school and was a college dropout. But, he said, “Your life, no matter how wonderful the school, isn’t going to be determined by whether . . . you’re at the top or the bottom of this class. You’ve been graded and you’ve been tested and you’ve been ranked. And I’m here to tell you that the die isn’t cast yet. The final scores are not in. What you have in front of you is opportunity.”

That really resonated with Katie Kneeland, who will attend Purdue University in Indiana in the fall to study engineering.

“He talked a lot about not being defined by ranks and grade-point averages, and that we are all capable of great things,” said Katie, who received the Cassidy Hagerman Community Scholarship and the Chelberg and Battle American Legion Post 388’s Jerry Guerin Engineering Scholarship.

Daniella Lejarza, who will attend Eckerd College in Florida in the fall to study biochemistry and computer science, and who received the Mulvihill Family Environmental Scholarship, called Mr. Bernstein’s speech “direct and inspiring.”

“It wasn’t a traditional speech,” she said. “I loved it.”

Sophia Borzilleri, who will attend Tufts University in Boston to study psychology, said she felt her own “personal responsibility to commit time to my passions” reflected in Mr. Bernstein’s words.

“I’m really interested in psychology and how people think the way they do, and how you can use that to enact positive change,” said Sophia, who received the Frances Lattanzio Memorial Award and the Theo Gray Award for Achievement in Photography.

Tristan Remkus, who will attend Clarkson University in Potsdam, N.Y., to study environmental engineering, and who earned scholarships including the Paul Hansen Memorial Scholarship for Science, the Katy’s Courage Scholarship, the Olde Towne Garden Club Scholarship, and others, said he would miss his friends and the community.

“It was the best of times, the worst of times,” Tristan said. “Everything was a learning experience, not just academically, but also socially.”

Daniella, who said she cried during the ceremony, got emotional afterward, too, as she reflected on her years at Pierson.

“I can’t imagine leaving. I loved high school,” she said. “It was great. I’m going to miss the people the most, and because of the flexibility of the schedules and the teachers we had here, I developed into the student I am today.”