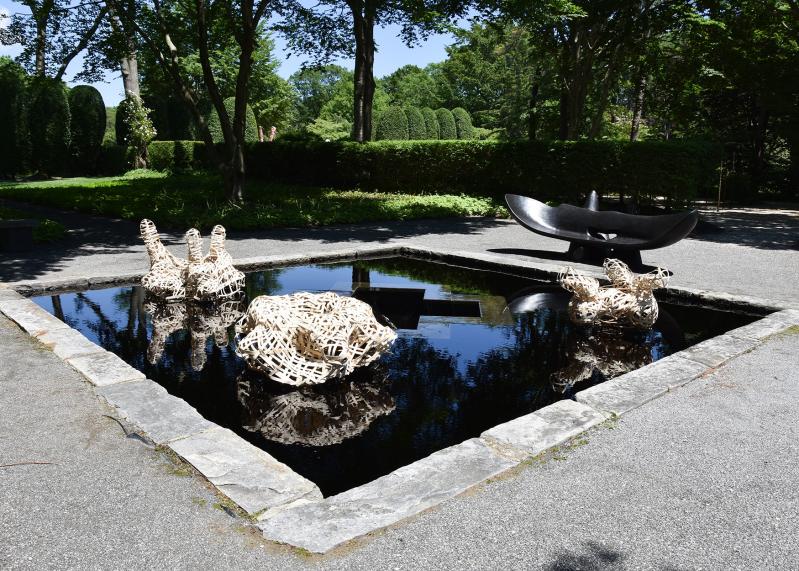 Stephen Talasnik’s floating “habitats,” made from flat reed bamboo, are an extension of his drawing practice. Wendell Castle’s sculptural bronze bench is at right.
Jennifer Landes Photos
By Jennifer Landes

Although parts of LongHouse Reserve’s gardens and sculpture are permanent and fixed, each season brings new life and variety to the plantings and art installations on the 16-acre site. This year is no different, with several new artists in the mix and a reshuffling of installations and plant matter here and there.

On a recent glorious Wednesday afternoon, the property and parking lot were packed with visitors young and old taking selfies and following the map to various outdoor rooms and trails that wind around the site.

Two new works recently joined the other installations and objects that came this year from Young Jae Lee, Will Ryman, Jun Kaneko, Wendell Castle, and Joseph Walsh. They are “Out of Sight,” an installation resembling a hopscotch board by Lawrence Weiner, and Stephen Talasnik’s “Echo,” floating reed bamboo “habitats” in the Black Mirror fountain.

Mr. Weiner is often credited with dematerializing the art object, a pivotal development in the formation of conceptual art. Realizing that a description of an object could work just as well as the object itself, he transformed that initial impulse into an entire career exploring the possibilities it implied. Words or diagrams might be painted on the wall, captured in books (or not), or even installed on the floor. “Out of Sight” is an example of the latter.

Set on LongHouse’s “squash court” in black and white, the 40-foot-long sculpture/generic structure/interactive public art installation, as it has been referred to in its two-year-long international tour, has been shown in Miami, Chicago, Los Angeles, Belgium, and Australia.

The aim of the piece is to forge “an engaging connection with audiences from all walks of life including adults, teenagers, and children,” according to the website devoted to the piece. By moving his work from the wall to the ground, the artist encourages a more participatory experience. Images from the other installations show people walking on it or through it, some even treating it as a hopscotch grid.

Even without anyone on or near it, the words offer their own engagement, practically begging for interaction or at least a nod of recognition. The curved shape, different from a traditional angular layout, implies more organic forms, perhaps part of a helix, continuation, or even infinity.

“Assuming a Position,” “Presume a Destination,” “Spit Into the Wind/Hope for the Best,” “The Destination Is Straight On,” “Out of Sight,” these fragments of text are recorded in the blocks that make up the grid, offering cues to think of the journey on more metaphorical terms. With its international pedigree, en plein air setting, and conceptual framework, “Out of Sight” brings its own cultural event with it.

Mr. Talasnik’s floating “habitats” are a linear extension of his drawing practice. “Echo” consists of three objects made of flat reed bamboo that form skeletal frameworks with allusions to animals, clouds, a baby, or other organic structures. Yet, he constructs the objects by hand without forethought or plan. Light enough to float and move about with the wind, the objects glide freely over the fountain’s water, continuously shifting position.

The choice of materials comes from experience in the Far East in places like China, the Philippines, Thailand, and Japan, where he also learned how to build structures such as bridges and buildings as well as more intuitive designs.

While both pieces are not near each other, each has a meditative quality that melds with the landscape that surrounds them. One cannot divorce the qualities of the setting, the nearby vegetation, and even the weather conditions from the experience of the artwork. While this is mostly the case at LongHouse, in these instances the mind, spirit, or subconscious engages as well so that it is also the individual viewers who influence the realization of the artwork while this assimilation of the senses occurs.

Both works will be on view through this season.