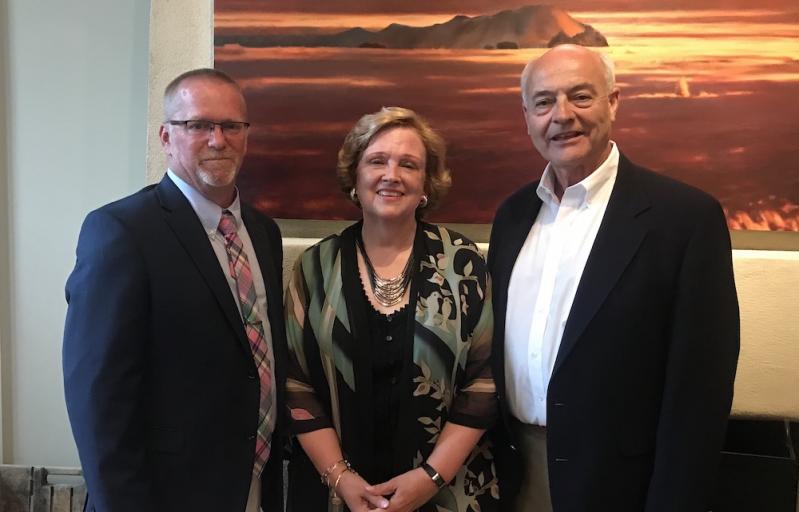 Barbara Borsack, with her running mates Raymond Harden, left, and Richard Lawler, kicked off her 2020 campaign for village mayor with a party at Ina Garten's house on Sunday.
Jamie Bufalino
By Jamie Bufalino

Barbara Borsack, a member of the East Hampton Village Board who is running for village mayor in 2020, held a kickoff party for her campaign on Sunday at the home of Ina Garten, the celebrity chef.

“Twenty years ago, I said to Barbara, if you ever decide to run for mayor, I’d like to give you a party,” said Ms. Garten during her introduction of Ms. Borsack, who has served on the village board since 2000.

Ms. Borsack introduced her running mates on the Elms Party line, Richard  Lawler, the village’s deputy mayor, who is seeking a third term as a trustee, and Raymond Harden, a co-owner of the Ben Krupinski building company and vice chairman of the village’s zoning board of appeals. Mr. Harden would be a newcomer to the village board.

“The theme for us is community service,” Ms. Borsack told supporters including State Assemblyman Fred W. Thiele Jr. and former East Hampton Town Supervisor Larry Cantwell. “We all grew up here. This is the place we love more than anything. We want to do the best we possibly can for East Hampton Village, and continue to make it the kind of place that we all love. So that’s what we’re all about.”

Ms. Borsack has been a volunteer with the village’s ambulance service for 30 years, Mr. Lawler has been a volunteer with the East Hampton Fire Department for 30 years, and Mr. Harden, a former chief of the fire department, has volunteered for the department for 20 years. “Between the three of us,” said Ms. Borsack, “There is 80 years of service in emergency services.”

During his speech, Mr. Lawler touted some of the board’s recent accomplishments, including the creation of the new roundabout at the intersection of Route 114 with Buell and Toilsome Lanes, and the ongoing beautification of the village’s commercial district and Herrick Park, an effort that has been spearheaded by his colleague Rose Brown.

Mr. Lawler said he and his running mates had been discussing how to improve communication between village government and residents. They are considering holding some board meetings in the evening to make it possible for those with day jobs to attend, to hold Saturday-morning coffee sessions with residents a few times a year, and to create a more informative Facebook page, he said.

Mr. Harden kept his speech succinct. “I think we have a great team,” he said. “I’m excited to run with Barbara and Rick, and I’m looking to learn a lot from them. I would love your support, as the rest of us would, next year in the election.”