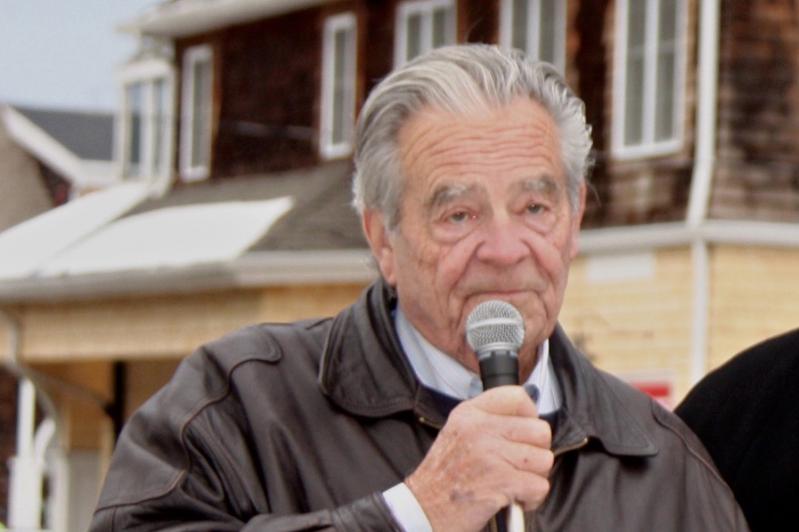 Mayor Paul F. Rickenbach Jr. plans to resign his post at the end of the year, six months before the end of his term.
Durell Godfrey
By Jamie Bufalino

East Hampton Village Mayor Paul F. Rickenbach Jr., who has held the office since 1992, said last week that he would resign as of Dec. 31, more than six months before his term is up. He planned to make an official announcement at the village board’s organizational meeting on Wednesday.

“This decision comes after much soul-searching and contemplation,” Mayor Rickenbach said. “It has been a humbling experience to serve as a public official to a wonderful, caring, and sophisticated constituency.”

Before becoming mayor, Mr. Rickenbach had served on the village police force for 24 years, retiring in 1982 with the rank of detective sergeant. He had also served two terms as a village trustee, and was appointed mayor after the death of Mayor Kenneth Wessberg, a few months before the 1992 election.

In early May, Mr. Rickenbach announced he would not seek re-election in the 2020 mayoral race. “There comes that time when you say, hey, I’ve made my contribution and I want to leave on a high note,” he said, adding that he had been feeling “burned out.”

“I feel like I’ve accomplished so very much working with others that I can step back, and I just hope that some of the things the village has achieved over the years will be manifested as we move ahead,” he said.

During his time in office, Mayor Rickenbach oversaw the development of the village’s first comprehensive plan, which lays out such priorities as preserving its natural resources, historical character, and quality of life.

Mr. Rickenbach described it as one of his proudest achievements. “I felt good about that because I saw things happening in the villages and towns around us, and I thought we needed to determine where we were headed,” he said. The plan was adopted in 2002.

The mayor and the village board have enacted several laws aimed at protecting the environment, including bans on the use of plastic straws, single-use plastic shopping bags, and the intentional release of balloons, as well as legislation requiring low-nitrogen septic systems in new single-family residences and in houses that increase in floor area by 25 percent, or in the number of bedrooms.

“It’ll never be matched,” said Barbara Borsack of Mr. Rickenbach’s 27-year tenure as mayor. Ms. Borsack ran against Mr. Rickenbach in the 1992 election. In 2000, the year she was first elected to the village board, he recruited her to run as a member of his Hook Mill Party.

“He’s been a great mentor,” said Ms. Borsack, who is vying to fill Mayor Rickenbach’s seat in next year’s election (a story about her campaign’s kickoff party appears elsewhere in this issue). “He was so good about showing me the ropes.” She said one of the attributes she admired most about the mayor was “how open he is to listening to the public.”

Richard Lawler, the deputy mayor and a former member of the East Hampton Town Police Department, has known Mr. Rickenbach since the late 1960s, as a local police officer, as village neighbors, and as a member of the village board. “He’s a man of principle,” said Mr. Lawler. “You always know where you stand with him, and I respect that.”

Even when he and the mayor disagreed on issues, he said, “his decisions were always made in the best interest of the village.” Mr. Rickenbach had a deep esteem for his office, Mr. Lawler said. “He would never get down in the dirt with anybody.”

After the mayor resigns, the village board will have two options, said Becky Molinaro Hansen, the village administrator. It can appoint a new mayor by a majority vote, or it can leave the office vacant until the election is held in June.

If the board chooses the latter path, Mr. Lawler, as deputy mayor, would assume the mayoral responsibilities, though not the title.

“I absolutely am prepared,” Mr. Lawler said of tackling such duties. “But I’m not going to assume anything. It’s going to take a little bit for the board to absorb this, and then we’ll have to decide what’s best for the village.”

After he leaves office, Mr. Rickenbach plans to spend more time with his four grandchildren, and do things which, he said, “put a smile on people’s faces.” He mentioned volunteering for Meals on Wheels as one example, and said, “There are other interests that I’d like to take advantage of while I’m still able to travel.”

In the announcement of his resignation, he signed off by saying, “I owe our village everything; in return, it owes me nothing.”