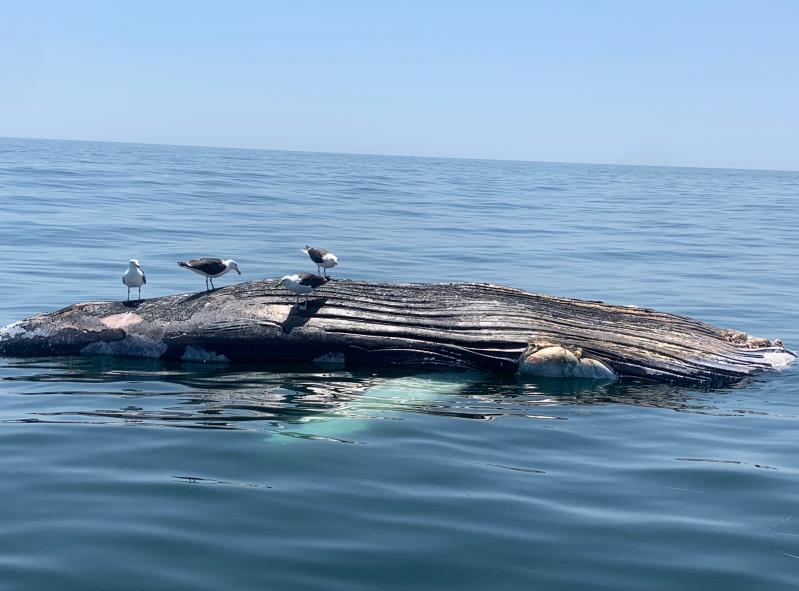 A dead humpback whale found floating six miles off Montauk on Wednesday has been towed to the ocean beach west of Kirk Park where the Atlantic Marine Conservation Society will perform a necropsy today.

The East Hampton Town Police Department along with the Coast Guard stationed in Montauk, the New York State Department of Environmental Conservation, the National Oceanic and Atmospheric Association, and the A.M.C.S. worked Friday to secure the whale and tow it to shore, said East Hampton Town Supervisor Peter Van Scoyoc.

An area of beachfront south of Old Montauk Highway in Montauk, from South Eton Road, at Umbrella Beach, to the west will be closed to beachgoers, and swimming in the area is not advised, the supervisor said. Town lifeguards will be blocking access to the area from Kirk Park. The society originally planned to examine the whale on Saturday, but will instead do so on Friday, "as it is fairly decomposed," Rachel Bosworth of the A.M.C.S. wrote in an email.

After the necropsy, "Contractors will then use heavy equipment to remove the whale from the beach for disposal," said Mr. Van Scoyoc. "The removal is expected to be completed by tomorrow, and the beach reopened."

Sightings of dead or distressed marine animals should be reported to the state's stranding hotline at 631-369-9829.