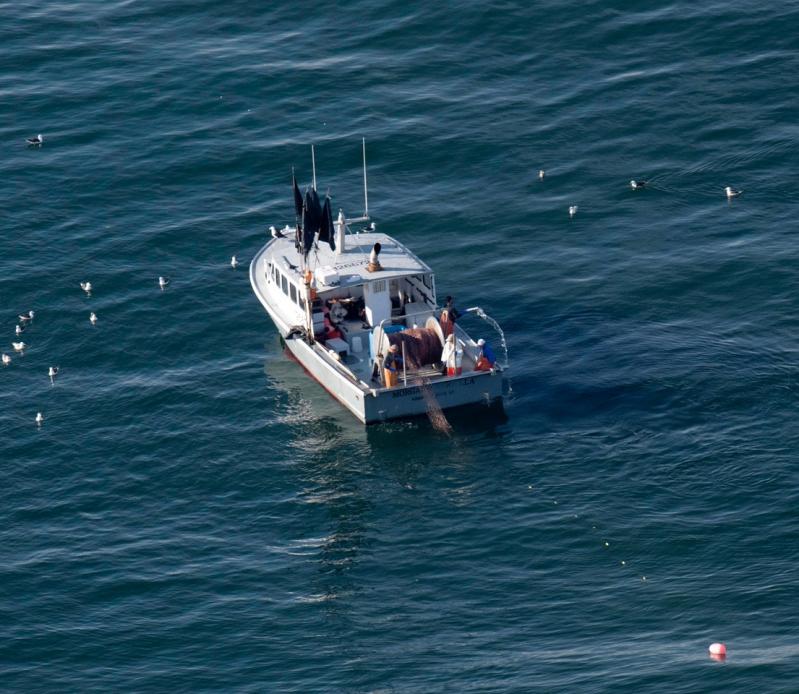 The fisherman pulled his net from the water on July 15 so the Atlantic Marine Conservation Society could confirm the whale was no longer entangled.
Doug Kuntz
By Jamie Bufalino

After a humpback whale was caught on July 15 in a fishing net off Town Line Beach in Sagaponack (and managed to free itself), and as several more have been seen feeding and breaching along East End shores this week, the New York State Department of Environmental Conservation is assessing whether fishing nets should be temporarily removed from coastal waters to prevent entanglements.

“The D.E.C. is continuing to evaluate any actions needed to ensure the protection of marine species while continuing to oversee sustainable fisheries management,” a representative from the agency said via email on Tuesday.

The D.E.C. has not contacted the fisherman who owns the gill net the whale encountered, but he has been cooperating with other officials. Lt. James Kiernan of the Southampton Town Police Department said the fisherman, whom he did not identify, was properly licensed, and Rachel Bosworth, a spokeswoman for the Atlantic Marine Conservation Society, said the fisherman had pulled his net from the water so her organization could confirm the whale was no longer entangled.

Robert DiGiovanni, the founder of the marine conservation society, had thanked him for his help, Ms. Bosworth said, and provided him with the contact number to report sightings and strandings.

The state’s stranding hotline, which should be used to report both living and deceased whales, dolphins, seals, and sea turtles, is 631-369-9829. Sighting alerts can be sent to [email protected].

As part of an ongoing effort to reduce the risk of whales getting entangled in fishing nets, the fisheries division of the National Oceanic and Atmospheric Administration has implemented the Atlantic Large Whale Take Reduction Plan, which, among other requirements, mandates that gill nets and accompanying buoys and flotation devices contain weak links that will break under force. The net that entrapped the whale on July 15 had such links.

“In this recent incident the whale freed itself, and the weak link on the gear worked correctly,” said the D.E.C. “The lessons learned from this incident will be discussed with NOAA Fisheries and the Take Reduction Team.”

Mr. DiGiovanni said his organization has documented 160 marine mammal mortalities so far this year. The majority have been whales and dolphins, he said, which had been killed mainly in boat strikes. That number, he said, was high. “People need to be made aware,” he said. “We think it’s interesting seeing the whales, but the biggest part of conservation is respecting them.”

The humpbacks have been making a comeback since being deemed endangered in the 1970s, he said, and they have been plentiful on the East End this summer due in part to regulations that have been enacted to increase fishery stock. “There’s more food around,” Mr. DiGiovanni said.

He was reluctant to recommend fishing nets be removed from local waters while whales are present, but said that government officials should make people more aware of what’s happening around them. He likened the situation to putting up signs encouraging drivers to slow down while driving through a school zone.

“The holy grail is to find the balance between allowing fishermen to provide food, and protecting marine life,” said Scott Landry, director of the Marine Animal Entanglement Response team at the Center for Coastal Studies in Provincetown, Mass. Mr. Landry was on his way to help free the entangled whale last week, but was called back after it got free.

“There are so many entanglements, we actually have a full-time team,” said Mr. Landry. The breakaway points on fishing nets, he said, don’t ensure that a whale that gets free will swim away unencumbered by remnants of the net, which can impede its ability to move freely and to feed. The D.E.C. said it had determined the recently entangled whale had been freed from any remaining entanglement.

“Most of the time whales can get themselves out of it,” said Mr. Landry. But, he said, because entanglements are a persistent problem, “it will happen again.”