Astrophysicist to talk relativity at the Spur in East Hampton 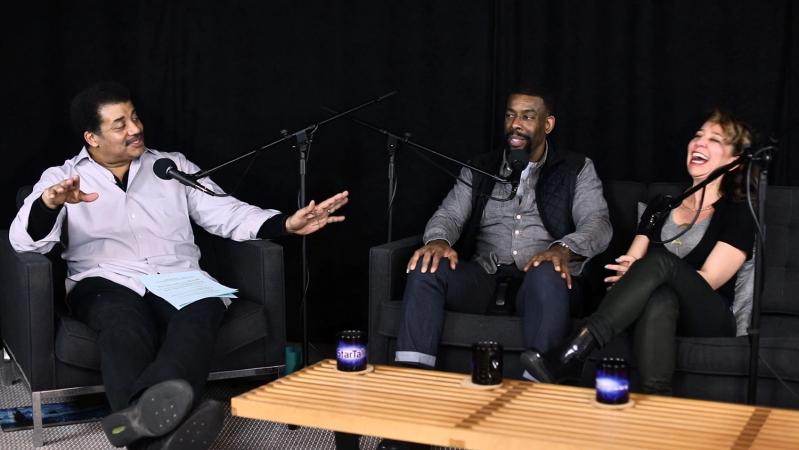 Neil deGrasse Tyson, left, at an event with Chuck Nice, center, and Dr. Janna Levin, who will appear with him at the Spur in East Hampton tomorrow.
Courtesy of StarTalk
By Christine Sampson

Neil deGrasse Tyson, the decorated astrophysicist, author, and host of television shows and podcasts, has been credited with sparking public interest in science — and keeping people’s attention on it — over the last few decades.

He does it, he said this week, by taking topics people already know and love — “Beyoncé, baseball, the New England Patriots” — and connecting them with the underlying scientific concepts.

“Science is not something ‘over there’ and you’re ‘over here’ and you can walk around it to avoid it because you didn’t like it in school,” Mr. Tyson said. “It’s a fundamental part of our existence in civilization — climate, transportation, the human genome, wealth, poverty, resources on Earth. All of these have science, technology, engineering, and math implications. And a way to do that, I have found, is to bring a scaffold of pop culture into the room.”

Tomorrow, Mr. Tyson will bring a live recording of his online show and podcast, StarTalk, co-hosted by Chuck Nice, a comedian, and Janna Levin, a physics and astronomy professor and award-winning author, to the Spur in East Hampton.

“The Spur is about innovation, and science is a core topic of innovation,” said Ashley Heather, its founder. “It fits exactly with what we’re trying to do — spotlighting education, new ideas, things that people should be aware of that are culturally significant.”

Mr. Heather called Mr. Tyson, who has received some of his field’s top awards, “somebody who can bring the complexity of science to almost everyday language, where everyone can enjoy it.”

Mr. Tyson, who oversees the Hayden Planetarium at the American Museum of Natural History in New York City, said people leave his talks “with extra knowledge that you want to keep because it touches things that you care about. I’d like to think that the public will then embrace science on the level that they embrace so many other things in their life, and not fear science or think of it as an evil empire that they want to reject.”

StarTalk on Friday will celebrate the 100th anniversary of the scientific experiment that proved Albert Einstein’s theory of relativity to be accurate. Mr. Tyson called it “one of the crowning achievements of the human mind.”

His co-host, Mr. Nice, is a comedian who has extensive television, radio, comedy club, and commercial credits to his name. “He will provide levity for the evening,” Mr. Tyson said. Dr. Levin is a noted cosmologist who “is uniquely qualified to talk about this point in the history of physics, the legacy of Einstein not only at the time but what impact general relativity has on us today,” Mr. Tyson said.

Mr. Tyson, who owns a house in East Hampton, appeared last year at Guild Hall with Quest Love — a wonderful event, he said, except for one thing: “I had Julie Andrews in the audience, and I didn’t get to meet her,” he said.

Friday’s edition of StarTalk is cosponsored by the SciHamptons Science Festival, which was founded five years ago by Helen Matsos, a Southampton resident who is the executive producer and co-creator of StarTalk, and who happens to work for NASA. After a period of dormancy, SciHamptons will return later this year with more programming, Ms. Matsos said this week.

“His impact is profound, I think, toward capturing the interest and imaginations of people ranging from young to old,” Ms. Matsos said. “He is a master at taking complex scientific concepts and rendering them palatable to the average person, and not just palatable but intensely interesting and even riveting. There’s really no one else like him.”

Mr. Tyson also has published a new book, his 15th, called “Letters From an Astrophysicist,” in which he answers questions he’s received by mail over the years. He said they have come from a wide range of people, including people in prisons, the terminally ill, a child who was bullied in school for being a “nerd,” and those trying to resolve their religious beliefs with science.

“It’s fascinating, the level of personal information that people shared with me in their plight to make the right decisions in life,” Mr. Tyson said. “They knew perhaps there was some insight that could be brought to bear on their challenges using a cosmic perspective. These are deeper questions. ‘How far away is the sun?’ is not in this book. This is ‘Can science and God coexist?’ ‘What is the meaning of life?’ ”

Asked whether he had any homework assignments for his StarTalk guests ahead of time, Mr. Tyson said no.

“My goal is not to have you ‘pre-game’ it,” he said, “but to have you so compelled that you will want to . . . go learn more, and you’ll dig up videos on YouTube and the Discovery Channel on your own. Then I will know we have succeeded.”

Tickets for the general public start at $50, and V.I.P. tickets that include a meet-and-greet and refreshments are also available. The show is at 7 p.m. More information and a link to reserve tickets are at thespur.com.