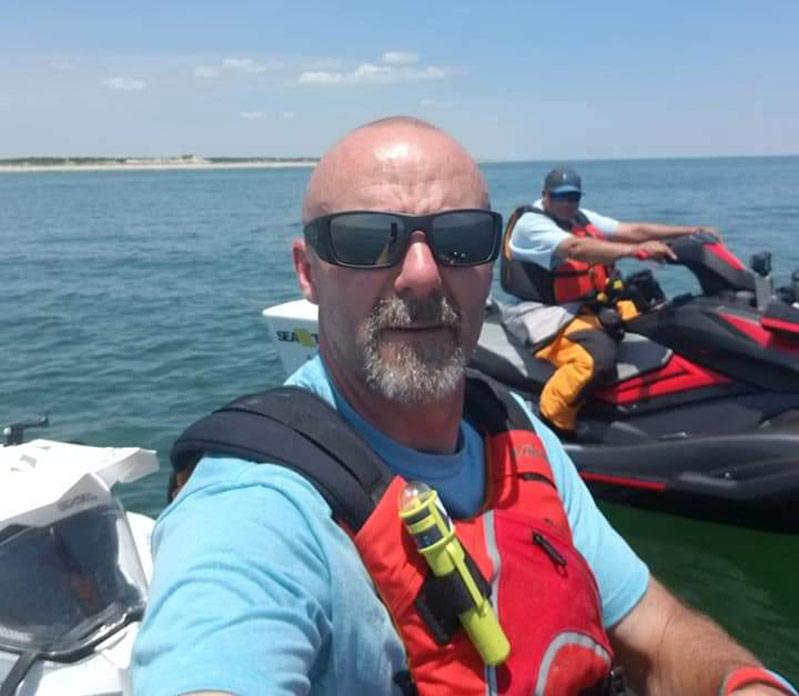 Tom Cronin, in the foreground, and Toby Green, outfitted with 45-gallon auxiliary fuel tanks, set forth on Jet Skis from Wades Beach for Key West on June 30.
Courtesy of Tom Cronin
By Jack Graves

After Tom Cronin and Toby Green, both Shelter Islanders, circumnavigated Long Island, a distance of about 250 miles, last Sept. 11 on Jet Skis, Green suggested that their next run be to Key West.

“I said, ‘Well, if we’re going down there, why not come back [on Jet Skis] too and set a Guinness world record,” Cronin, who was camping with some of his seven kids at Montauk’s Gin Beach this past weekend, said during a conversation Saturday morning.

“And then my wife [Susan] said, ‘If you’re going to do it, make it meaningful, do it as a fund-raiser for Julia.’ ”

Susan Cronin was referring to Julia Ceresnak, Cronin’s 8-year-old great-niece, a Californian who was had scleroderma, a disease for which there is as yet no cure, since she was 6.

And that, said Cronin, was how the Go the Distance for Julia 3,200-to-3,300-mile, two-and-a-half-week Jet Ski journey in the ocean from which he’d just returned came to be.

He and Green, along with friends of theirs, had stayed up all night before their departure from Wades Beach on June 30, the retired Shelter Island police officer said, putting the finishing touches to auxiliary 45-gallon fiberglass fuel tanks of Green’s design that they attached to the aft ends of their 2019 Yamaha FX SVHO WaveRunners, whose fuel tanks normally hold 18 gallons.

He had stood up on his Jet Ski, Green had sat on his, the interviewee said in answer to a question, but neither had escaped the sores that came from chafing “and bacteria of some sort in the ocean spray. . . . We were wet the whole time, 12 to 14 hours a day.”

Green’s chafing was sufficiently worrisome that a doctor in Key West put him on antibiotics and said he should jettison the rest of the journey. “I didn’t go to the doctor,” Cronin confessed. “How do you tell a sick girl you’d quit? Her parents — her mom’s a nurse and her father is a pediatric cardiologist — go above and beyond to make sure she has a great childhood.”

And so, having made it down to Key West in eight days — “starting off, we thought it would only take three, one of our many underestimates” — he made it back in six, pushing really hard, about 300 miles on the last day, arriving to a Wades Beach welcoming party at midday on July 17.

It had been “a little scary” making the return trip solo, though he had done it. Exhausted, he went home, cleaned the machine a bit, hung out with his kids, whom he had missed, had some food, and went to bed.

This week he’ll begin getting together the paperwork required to receive Guinness’s imprimatur. The present open water unassisted personal watercraft record was, he said, 1,900 miles, “by a Finnish rider, probably in Europe.” Should his submission be verified, Cronin will have smashed that.

The daily stages — they were in the ocean throughout, not in the inland waterway, sometimes as far as 22 miles offshore, though mostly within sight of land — varied between 100 to 300 miles a day.

“We slept,” Cronin said in a reply to a question, “on floating docks, in parks, on remote beaches, on cement . . . people helped us wherever we went. They were interested in our modified machines. ‘What the heck is that?’ they’d ask. The people we met were the best part of it, in Georgia, North Carolina, South Carolina. . . . It restored his faith in humanity, Toby said.”

He had lost 19 pounds during the course of the agon, Green had lost 15 or 16. “We left each day when the sun came up; nothing was open. We had one meal a day, lunch. At night we were too tired to think about eating. Sometimes we made M.R.E.s. You know what they are, military meals. You add water. Energy bars kept us going.”

They had had no layovers to speak of, Cronin said, “except for a half-day at Cape Canaveral. The wind and waves were not safe.”

One of their major sponsors, Sea Tow Services International, headquartered in Southold — Cliff Clark’s South Ferry Company being the other major sponsor — had come to the rescue a couple of times when they’d awakened to see their craft resting high and dry up a beach, “40 to 50 feet out of the water. That’s another thing we didn’t anticipate. We’d call an 800 number and within a half-hour Sea Tow would have somebody there. The head of Sea Tow, Joe Frohnhoefer Jr., also gave us an EPIRB, an emergency position indicating radio beacon that, if activated, would enable the Coast Guard to come right to me.”

The ordeal, he added, in answer to another question, was “not for everyone . . . you need to have the motivation and the mental . . . strength.”

With the receipt of a dollar-a-mile pledge a sponsor had made, $30,000 will have been collected, said Cronin, to go toward research by the Scleroderma Foundation, leaving $20,000 to go in order to meet his and Green’s fund-raising goal.

Donations can be made online at scleroderma.org/goto/JetSkiforJulia.

“Twenty thousand dollars is a lot to make up. Everything would be perfect if we could make that.”

Yamaha, he said in reply to a question, had not offered any sponsorship. Perhaps it would next time, he said in parting, once the company learned of the world record.

Asked what was next, he said he and Green would probably jet-ski soon to Block Island, and that if Yamaha would sponsor it, he might be willing to “go down to South America, and around, and back up to Alaska. . . . I’d do it,” he said with a smile.