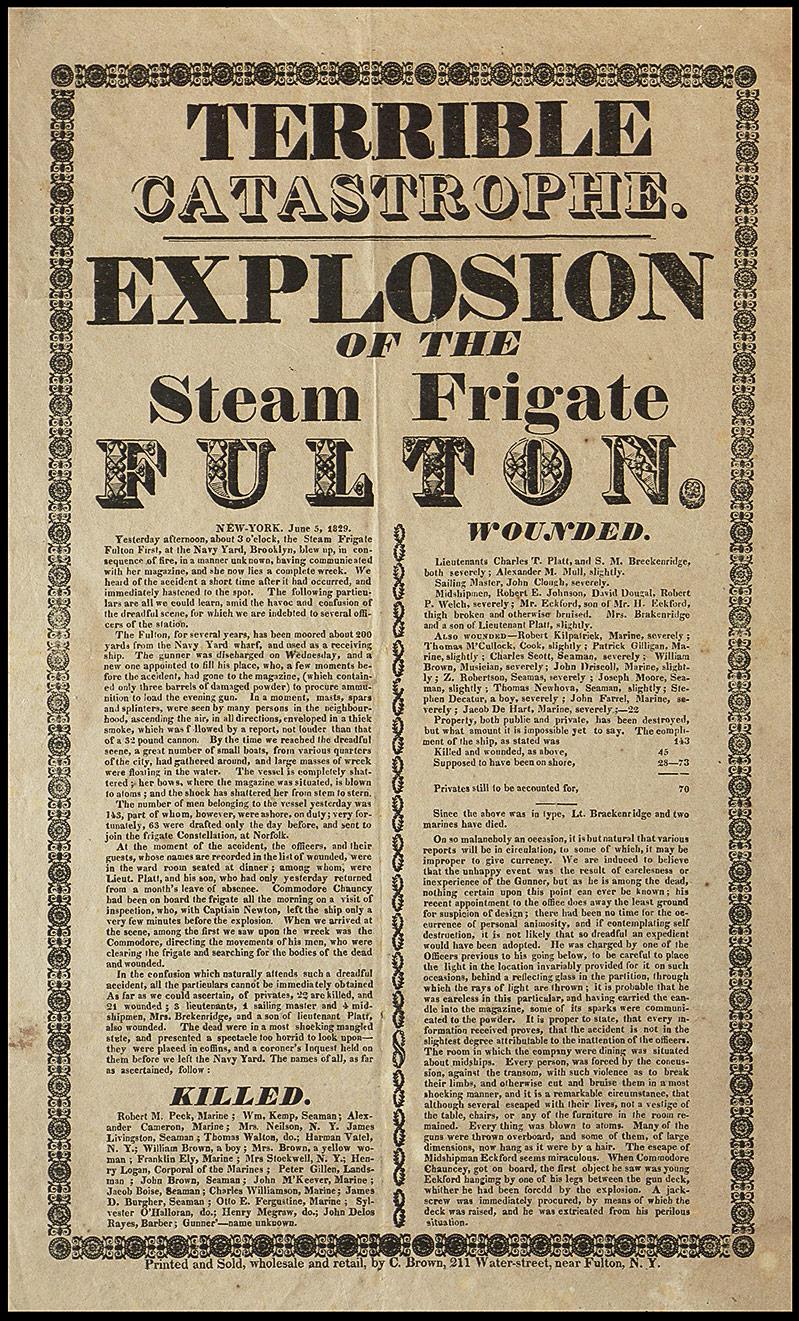 The words “terrible” and “explosion” stand out on this broadside from 1829, put out just one day after the explosion of the steam-powered warship Fulton in the Brooklyn Navy Yard. This ship’s demise was not the result of war, however.

Originally known as the Demologos, meaning “voice of the people,” the Fulton was built in response to the War of 1812, whereby the United States declared war on the United Kingdom. Congress approved its construction in 1814, and it was built by Robert Fulton, the American engineer and inventor credited with developing the first successful steamboat and first practical submarine.

Launched in 1815, the Fulton was a steam-powered catamaran — one hull containing a boiler and one a steam engine. A paddle wheel was between the two, protected from gunfire. The hulls were also connected by an enclosed gun deck, which accommodated twenty-six 32-pound guns. Twelve guns could fire from each side of the ship, and there was one gun that could fire straight ahead and another behind. Rudders at both ends also allowed for easy maneuvering in the water.

As can be judged from its description, the ship’s design was unusual. It could not make long voyages out on the open ocean, but it was considered capable of engaging with blockading British warships in coastal waters, such as Long Island Sound. On calm and windless days, sail-powered enemy warships would have been slow-moving targets for the Fulton.

By the time the ship was completed, however, the war had ended, and the Fulton saw only one day of active service, carrying President James Monroe on a tour of New York Harbor. After years of waiting in reserve, it was eventually moored at the Brooklyn Navy Yard in 1825 to be used as a floating barracks.

On June 4, 1829, a group of men were dining on board when the ship’s gunner went to the powder magazine to “procure ammunition to load the evening gun.” Shortly thereafter, the ship exploded. No cause was ever determined. More than 20 people were killed, with 24 wounded and in need of immediate medical attention.