Humpback one of many seen off ocean beaches 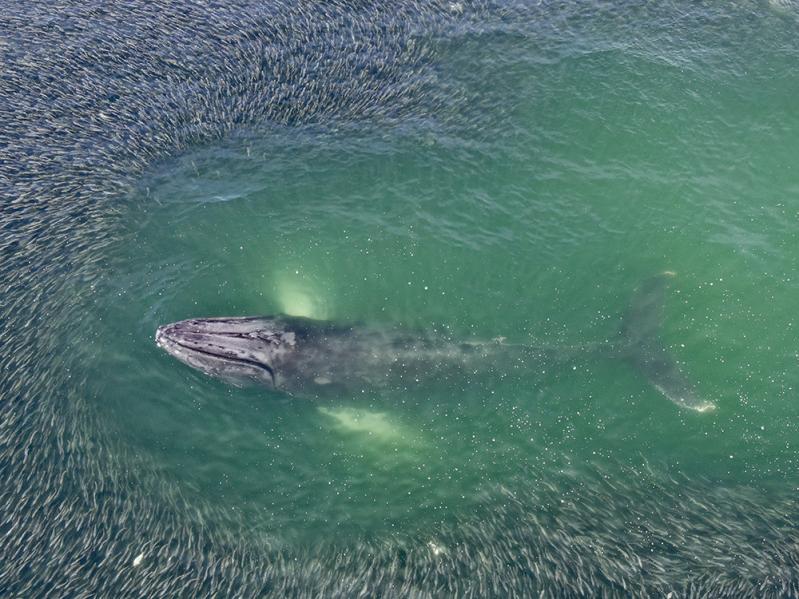 Humpback whales, like this one feeding on a large school of bunker off Atlantic Avenue Beach in Amagansett on Monday, have been especially active along the South Shore in recent weeks, with sightings reported at nearly every beach and an entanglement on Monday off Sagaponack.
Sutton Lynch, @suttonlynch
By Jamie Bufalino

After several beachgoers attempted to free a humpback whale entangled in a fishing net off Town Line Beach in Sagaponack on Monday, the whale, which had been trapped for hours 75 feet from shore, ultimately freed itself as the Coast Guard and Southampton bay constables looked on.

The Atlantic Marine Conservation Society said late Monday that the whale was no longer sighted in the area. Rachel Bosworth, a spokeswoman, expressed concern that it might still have been entangled in gear, but on Tuesday, the New York State Department of Environmental Conservation said it had concluded it might still have been the whale was no longer encumbered by remnants of the net.

“Once the whale was able to free itself, the gear was evaluated to determine if any portions of the net or line was missing, and if the whale was possibly still entangled,” said Stephanie Rekemeyer of the D.E.C.’s division of marine resources. “After review of the gear, it was determined the weak link of the gear broke away as designed, and the whale was free of any remaining entanglement.”

The whale was one of many seen off the coast in recent weeks. “There have been an abundance of whales cruising our beaches, feeding on bunker, giving nice picture ops, and this one was swimming along approaching this set of gill nets and it got stuck,” said Matt Heckman, who was at the beach, a regular fishing spot for him, when he saw the whale. He alerted the Southampton Town police, and the Coast Guard, he said.

The police said they had received a call about the entangled whale around 1:15 p.m.

When Aaron Warkov, who lives near Town Line Road and frequently surfs at the beach, noticed the whale had gotten caught in the net, he ran home to get his surfboard, while George Mittendorf, who lives in Wainscott, went to fetch a diving knife.

“We were cutting the net off of him, and we got everything from right by his blow hole down to his tail, but his front fins and head were still entangled,” said Mr. Warkov.

The whale, which appeared to be about 20 to 25 feet long, was not thrashing, but did surface occasionally for air, he said.

“It was hard because you would try to be in the right position when he would surface, and you’d try to grab a hold of the net and cut maybe two to three inches at a time,” said Mr. Warkov, who was worried about getting ensnared himself. “I wanted to save the whale but not drown in the process.”

When the bay constables arrived, Mr. Warkov said they told him and Sam that a Coast Guard boat was en route, and asked them to head back to shore.

As the bay constable boat monitored the situation from the water, Eric Neuendorf, a town police officer who is part of the unmanned aerial systems division, operated a video drone from land. The whale was still trapped, he said, but appeared to be doing well.

Although it had been entangled for several hours, the whale was surfacing intermittently. Shortly after the Coast Guard boat arrived, there were no more sightings of it.

Southampton police announced at about 6 p.m. that the whale was no longer entangled.

The whale was able to free itself, said Mr. Mittendorf, because of the efforts of Mr. Warkov and the Australian surfer. “If they hadn’t helped,” he said, “this could have ended badly.”

The conservation society had urged the public on Monday to stay at least 150 feet away from the entangled whale, not only for safety, but also to avoid further stressing the whale. Whales are protected by the Marine Mammal Protection Act, and it is illegal to approach them, the society said.

“Whales in distress can also be dangerous, as they are unpredictable and very powerful,” the conservation society said. “People have been seriously injured or killed trying to help, which is another reason we ask that people wait for trained responders.”

During the incident, several people watching from the beach were critical of the use of fishing nets.

Mr. Heckman called them an “archaic” way of fishing. “If you don’t think those nets are killing every kind of fish that swims along our shores, you’re smoking something,” he said.

This was the first time in 20 years that he had seen a whale ensnared by one, he said, but he had seen six to eight shark carcasses on the beach, as well as other dead fish with a “telltale rash” that indicated they had been trapped in a gill net.

The conservation department should have made the fisherman remove the nets since so many whales had been sighted recently, said Mr. Heckman.

“We close the beaches for the piping plovers,” he said, and wondered why whales weren’t treated with the same concern as the birds, which are listed as “endangered” in New York State.

Listed as endangered in the 1970s, the humpback whale “is increasing in abundance in much of its range, but faces threats from entanglement in fishing gear, vessel strikes, vessel-based harassment, underwater noise, and habitat impacts,” according to the National Oceanic and Atmospheric Administration  Fisheries website.

“Once entangled, if they are able to move the gear, the whale may drag and swim with attached gear for long distances, ultimately resulting in fatigue, compromised feeding ability, or severe injury, which may lead to reduced reproductive success and death,” according to NOAA Fisheries. “There is evidence to suggest that most humpback whales experience entanglement over the course of their lives, but are often able to shed the gear on their own.”

Ms. Rekemeyer said the state’s environmental conservation law regulates locations, net length, mesh sizes, and surface markings for such nets, and that NOAA Fisheries has implemented the Atlantic Large Whale Take Reduction Plan, which requires that nets contain various weak links that are designed to break under the force of a swimming whale.

Mr. Mittendorf, who called the nets a hazard, said they ought to be restricted. “They come right into shore, even a surfer or a swimmer could get caught in them,” he said. Dead fish in the nets, he pointed out, can also attract sharks. “And this is a swimming beach.”