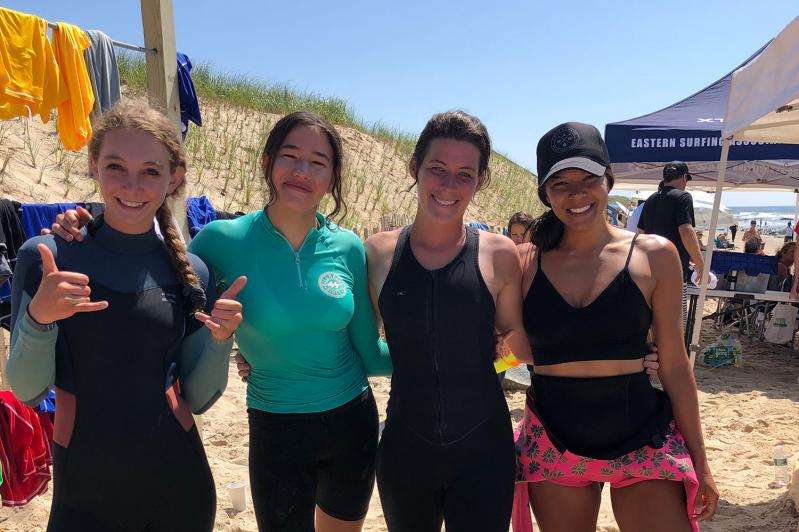 Tabatha Hirsch, 17, left, Frankie Komar, 15, Juliana Sheehan, 31, and Jean Capitali, 35, suited up for their first rounds of competition at the Rell Sunn Surf Contest on Saturday. This was Sheehan’s seventh year surfing in the contest.
Cecelia H. Scheuer
By Cecelia H. Scheuer

Surfers from 7 to 70 took to the waters at Ditch Plain Beach in Montauk on Saturday for the 21st annual Rell Sunn Surf Contest. All proceeds from the event, sponsored by the East End Foundation, will go to local families “encountering financial hardships due to debilitating illnesses or other tragic circumstances.”

Purple hydrangeas lined the beach Saturday morning as over 100 local contestants honored the legacy of Rell Sunn, a women’s surfing pioneer who died of breast cancer in 1998. During the 15 years after she was diagnosed, Sunn continued to inspire people in and out of the water, living up to her middle name, Kapolioka’ehukai, Hawaiian for “Heart of the Sea.”

This year’s contest kicked off around 8:30 a.m. after a Blessing of the Water ceremony was performed at the ocean’s edge. The contest was open to all and featured multiple categories with heats of three to five surfers each, some of whom advanced to the semifinal and final rounds later that day.

“It’s surfing, which is awesome, and you get to actually help people in our community by doing it. What’s not to like?” Tabatha Hirsch, a 17-year-old contestant, asked.

“I love it because it’s not too competitive,” said Kieran Hildreth, a 9-year-old contestant. “It’s about bringing people together and you get to make new friends.”

Throughout the day, spectators could purchase raffle tickets to win goodies ranging from posters for this year’s contest, designed by the Montauk artist Allison Seiffer, to gift cards to Gurney’s Resort in Montauk. There was also a silent auction, in which attendees could bid on photographs, paintings, and antiques donated by local artists.

Roger Feit, director of the East End Foundation and former Grand Master surfing champion, founded the event with Dorothy Peele in Rell Sunn’s name almost 22 years ago after learning of Sunn’s perseverance and unwavering commitment to community. Sunn consistently took time between her travels and competing to teach Hawaiian kids how to surf, a special legacy to honor in an event dedicated to coming together to help those around you.

Following Sunn’s death, proceeds from the first contest went to help fund cancer research, but Feit soon learned that donations could go an even longer way when given to local people in need, which inspired him to start the East End Foundation.

“Millions of dollars were given to cancer research when hundreds of thousands of these dollars could be used to save families right next to us,” Feit said. The next year, all proceeds from the event were channeled to a local family whose 4-year-old was suffering from a life-threatening form of cancer; they were about to lose their home due to the high cost of his medical bills. The family was able to use the money to pay their mortgage, and more important, the boy is now a healthy young man in his 20s. Since then, the East End Foundation has selected a few local families to benefit from the contest each year.

The proceeds from this year’s contest will go to three Montauk families. The foundation has chosen to keep the families’ circumstances private. The foundation is also supporting several other people in need, including a family whose home was destroyed in a fire, a single mom recovering from cancer surgery, a young child debilitated by a spinal injury, and several men and women struggling with autoimmune diseases that restrict their ability to work full time.