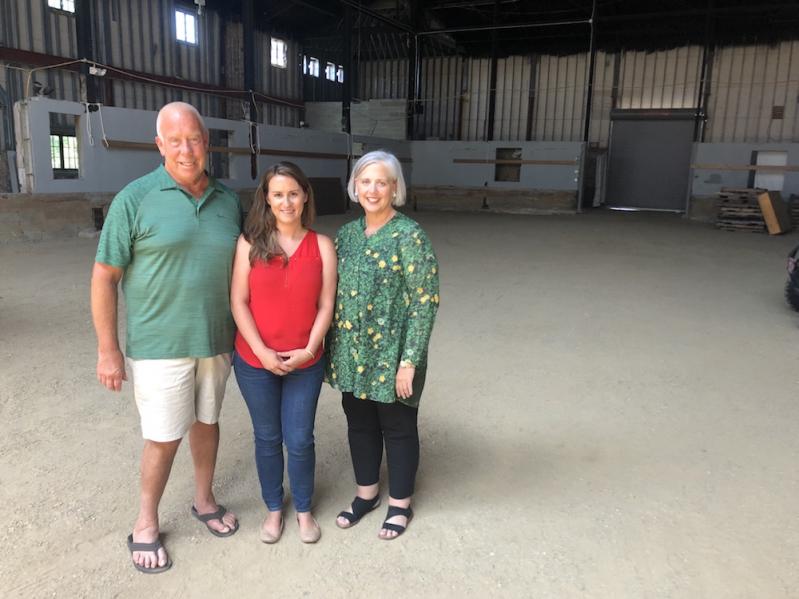 On its mission to transform an empty space in Montauk into a cultural center and community pool, representatives of the Montauk Playhouse Community Center Foundation said this week that they have revamped their plans, retooled their fund-raising strategy, and revised the project’s price tag and timeline.

Perry Duryea III, chairman of the board of the foundation, and Julia McCormack, the recently hired director of development, announced a shift from a “phased-in” construction plan to a “complete build-out” all at once of the cavernous, unfinished half of the Montauk Playhouse Community Center building. It will be more cost effective in the long run to do it this way, they said, even though it will cost more money over all than originally anticipated.

When the price of the project was announced in 2015, it was about $8.5 million. But in the ensuing years, Mr. Duryea said Tuesday, construction costs rose, and the estimate is now about $11 million with an additional $2 million needed to launch and sustain programming, he said. Whereas once the organization planned a groundbreaking in 2018 and a grand opening in 2020, Mr. Duryea said there is a new, three-to-five-year timeline for completion.

The foundation will not hold the annual gala that it typically threw every August, opting instead for a series of smaller, more intimate fund-raisers that are less resource-heavy. For instance, Ms. McCormack pointed to a community swim event that will take place at Ditch Plain on Saturday at 6 a.m., and the Nancy Atlas Project will play a show for the Playhouse titled “Gone Local” on Aug. 29 at 5:30 p.m. at Rick’s Crabby Cowboy Cafe.

Mr. Duryea called the playhouse project “the largest private undertaking that has ever happened here in Montauk.”

“Montauk has undergone a tremendous amount of change, from the time I was a boy up until the present, and even in the past five to seven years,” he said. “People are realizing, as are we, if you want to preserve the soul of Montauk, the fabric of Montauk, the identity, you have to seriously consider the kinds of things that are being done. Not only here by us, but through the library, the public school, and so on. You’ve got to have the infrastructure, the focal point, otherwise you’ve got no community.”

The foundation manages the playhouse building in partnership with East Hampton Town, which has a satellite town clerk’s office, senior citizen center, and other services in the finished half of the 26,000-square-foot facility. The building, which Mr. Duryea estimates dates back to the 1930s “when Carl Fisher was roaming around here,” also houses a public gymnasium, leased-out fitness studios, and a day care facility. The foundation teamed up with the town in 1999 to restore the building and create a partnership to operate it. The foundation has been formally raising money to finish the raw space since it incorporated as a nonprofit in 2006.

In 2018, it had its most successful year to date, raising about $1 million on its own — bringing its total to around $3 million. The Town of East Hampton pledged another $3 million toward the project, and a $250,000 challenge grant from Sarah and Maurice Iudicone was matched by community donations.

Mr. Duryea said he wants to reassure people that the construction will be completed, even though it is taking longer than initially thought. The task now, he said, “is not to win over the local community, but to convince the local community that this will happen.”

“A lot of well-intentioned local people have cycled through here and have given a tremendous amount of time and energy,” he said. “There is a certain feeling on the street as to when and if this is going to happen. To a degree, people may have underestimated the actual dollar amount needed for the project. It was last done in 2015. Those numbers are no longer valid. Some people locally may be surprised to hear this isn’t an $8.5 million to $9 million project now.”

Construction plans are still the same. A 25-yard fitness pool and a 30-by-30 foot leisure and therapy pool are slated for the lower level. Upstairs, a 250-seat cultural arts center and flexible event space is planned. The two spaces together will total about 13,000 square feet.

“People of every age have the opportunity to use this building from the moment it opens in the morning until it closes at 9 o’clock in the evening,” Ms. McCormack said. “Our hope through the building of the pool and the cultural center is that we can extend those opportunities. We think it is essential to provide not just opportunities for swimming throughout the year but also a place for water safety and lifesaving skills. It is enormously important for this community. Communities come together through activity and through the exchange of ideas, which happens in theaters, in the arts. We believe Montauk needs that as a resource.”

Mr. Duryea recalled “what it’s like growing up in Montauk on a rainy day in January. Whatever is happening is happening 20 miles west of you in East Hampton. That 20 miles can seem like 100 miles.”

Pointing to a blueprint of the aquatic center that hangs on the foundation’s office wall, Mr. Duryea rubbed his left shoulder, which recently underwent a surgical procedure.

“I can’t wait to get into that therapy pool, the leisure pool, over there. I’d be in there tomorrow if I could,” he said. “This is going to take some effort, but this is going to happen.”