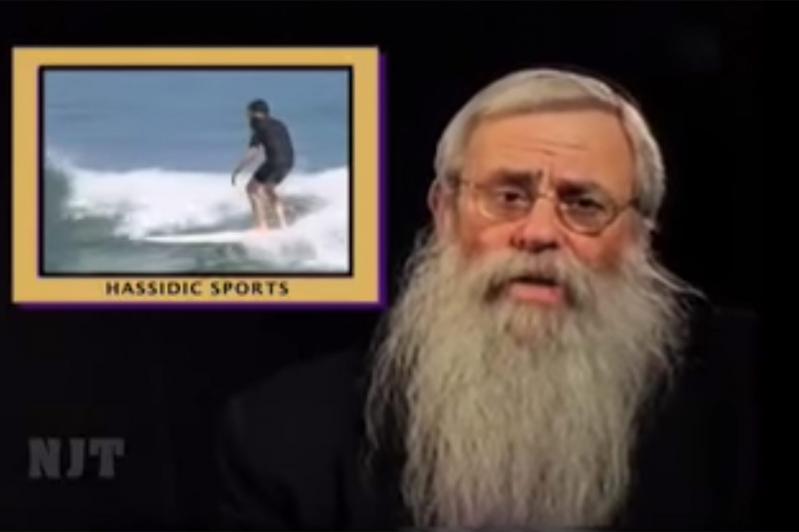 Yisrael (Izzi) Lifschutz starred in and directed “HAG: The Story of the Hasidic Actors’ Guild,” a comedic hybrid of fact and fiction.
By Mark Segal

Next up on Tuesday at 7:30 is “Operation Wedding,” a documentary by Anat Zalmanson-Kuznetsov about a daring and ultimately doomed attempt by 16 Jews in 1970 to escape the Soviet Union by buying every ticket on a small private plane under the pretext of attending a local family wedding.

The passengers, among them the filmmaker’s parents, were intercepted by the K.G.B. just before boarding the aircraft. Two were sentenced to death, but the verdicts were reduced after international pressure. All the participants were imprisoned in the gulag.

The filmmaker and her mother, Sylva, who is now an artist and human rights activist in Israel, retrace the group’s journey from a Soviet airport to a K.G.B. prison. The film draws upon archives, interviews with K.G.B. officers, and includes reenactments. One of the participants, Israel Zalmanson, who received a 10-year sentence, will be present at the screening.

A change of pace will be offered on July 23 with “HAG: The Story of the Hasidic Actors’ Guild,” a comedic hybrid of fact and fiction about, and directed by, Yisrael (Izzi) Lifschutz, an actor who has appeared in “The Chosen” and “Pi” but who is best known for founding the guild, which trains actors to accurately portray Hasidim on film.

“HAG” includes archival footage, interviews, and staged scenes, all assembled by Mr. Lifschutz, who has characterized himself as “so animated [an actor] they call me the kosher ham.”

Subsequent programs will feature “Who Will Write Our History,” a documentary about the journalists, scholars, and community leaders in the Warsaw Ghetto who fought the Nazis with pen and paper; “Moritz Daniel Oppenheim,” a film about the German painter widely regarded as the first Jewish artist of the modern era, and “The Dybbuk,” a Yiddish film classic from 1937 based on the celebrated play of the same name.

The series, which has been organized by Tina Silverman, will conclude on Aug. 20 with “Monsieur Mayonnaise,” a documentary in which Philippe Mora, an Australian artist and filmmaker, investigates his father’s role in the French Resistance during World War II and his mother’s escape from Auschwitz. Tickets are $15. More information, including the complete schedule, can be found on the arts center’s website.