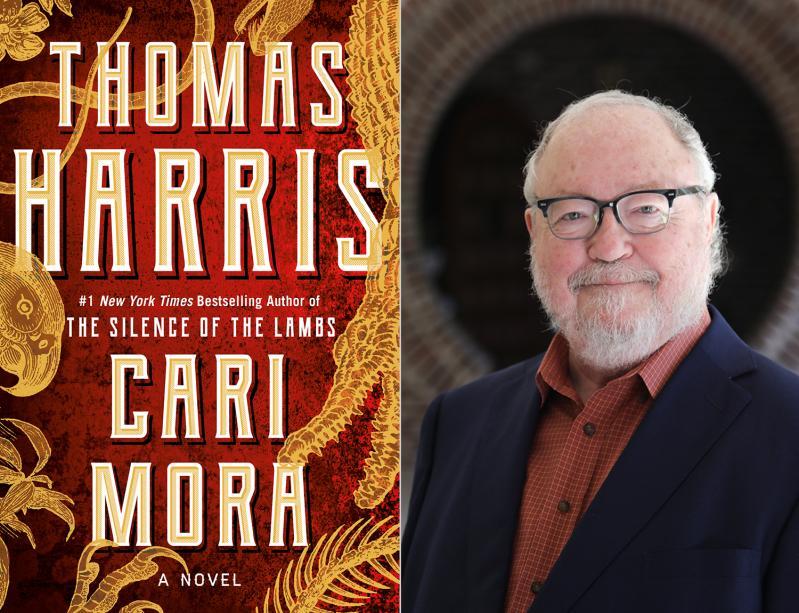 “Nothing shocks anymore” goes the modern cliché. In an agnostic age of mass media and free speech, we have seen, read, and heard it all. Nihilism has finally reached its endgame.

“He could see his reflection in the glass side of his liquid cremation machine where he was dissolving Karla, a girl who hadn’t worked out for business.”

Not to worry, though, Herr Schneider is environmentally enlightened. “The liquid method left no carbon footprint, or print of any kind. . . . Hans-Peter could just pour her down the loo in liquid form — and with no harmful effect on the groundwater.”

Mr. Harris is also the writer of “Red Dragon” and “The Silence of the Lambs,” among others, and therefore creator of the most indelible villain in contemporary fiction, Hannibal Lecter. Although “Cari Mora” is the author’s first non-Lecter novel in decades, he sticks to his formula of pitting a terrifying man against an attractive and capable young woman.

The heroine, Cari Mora, is a delight: tough, sexy, hard working. Kidnapped as a young girl into a Latin American guerrilla army, she now seeks redemption in Miami, where she works in property management and as a part-time veterinarian. Unbeknownst to her, the home she oversees was formerly owned by Pablo Escobar, and buried beneath it is a steel locker holding $20 million in gold bars.

Enter our friend Hans-Peter. He and his henchmen have learned of the fortune and pretend to be part of a film company arriving to shoot footage at the house, as a ruse to search for the loot. When Hans sets his eyes on Cari, he decides to add her in his bounty, knowing she will fetch a nice price on the trafficking market.

The novel’s early scenes, when Hans and Cari are in proximity in the Escobar house, have a fraught sense of dread. Later, when Cari flees to avoid Hans, the novel becomes a compelling adventure story as competing factions vie for the treasure beneath the house.

Mr. Harris, a former journalist, writes with a ferocious economy and suspense. He is not, however, above some ham-handed character manipulation with his heroine and villain. Is it not enough that the physically scarred Cari has survived childhood rape and torture, pursues the American dream with admirable tenacity, and is generally decent and kind? As if to fully earn her angel’s wings, she also volunteers at a bird sanctuary, where she stitches up wounded ospreys.

And it is hinted that Hans-Peter — pornographer, trafficker, torturer, organ harvester — may be no less than the offspring of a Nazi. Mr. Harris makes the point of telling us that Hans is from Paraguay — that former bastion of Nazi exiles. When he hums, he favors melodies from Bach’s “Goldberg Variations.” If Josef Mengele had a son, might not this be what he looks like?

Maybe not. As a young man, Hans-Peter apparently locked his parents in a walk-in freezer for four days. When he finally opened the door, “They looked at him, their frozen eyeballs glinting. When he swung the ax they broke up in chunks.” This, evidently, is what you get for asking little Hans to tidy his room.

Attempts to out-Lecter Lecter aside, the novel mostly succeeds as a summer page-turner, creating an increasing suspense as the gold is battled over and Cari and Hans head toward their final confrontation.

But in the end it is the nihilistic violence that lingers. Hans flushes cremated bodies down his toilet, while a colleague transferring a pair of harvested kidneys decides his parcel is too tempting and eats one before it can be delivered to the buyer. (And without even a glass of Dr. Lecter’s Chianti to wash it down. Philistine!)

There is no doubting that Mr. Harris is the undisputed king of memorable grotesquerie. But what, ultimately, are we to make of an imagination like this? And what does it say about us, the audience who flocks to it? For surely “Cari Mora” is headed to the best-seller list and the movie theater.

Still, one has no choice but to recommend Mr. Harris’s highly skilled performance. It is a book to be read, enjoyed for its chills, then put aside and forgotten as best one can, relieved that our own unconscious does not resemble that of this talented but disturbing author.

Kurt Wenzel’s novels include “Lit Life” and “Gotham Tragic.” He lives in Springs.

Thomas Harris has a house in Sag Harbor.