To the soundtrack of Southern soul, a road-trip pilgrimage along the historic civil rights route 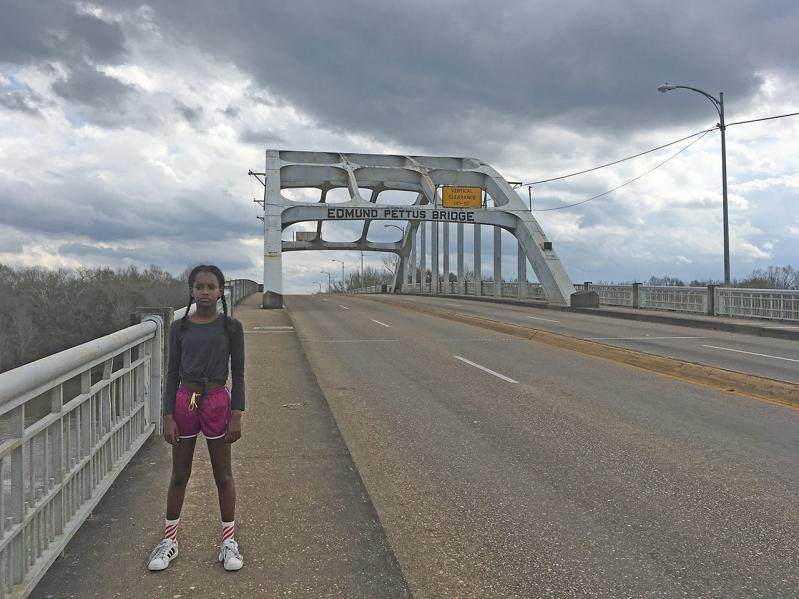 Nettie Rattray (11) on the Edmund Pettus Bridge in Selma, Ala., where voting-rights activists were violently confronted by law-enforcement officers in 1965.
Bess Rattray
By Bess Rattray

Cruising west along Highway 80, between Montgomery and Selma, my kids and I sang along loudly to “Ain’t Gonna Let Nobody Turn Me Around,” over and over, to get our off-key harmonies right. We were on a weeklong pilgrimage to the holy sites of the civil rights movement: Birmingham, Montgomery, and Selma, Ala.; then Meridian and Jackson, Miss., then up to Memphis.

I’d left La Guardia Airport a few days before, dragging my 9-year-old son and 11-year-old daughter behind me — somewhat dreading the driving part and expecting the backseat to be a scene of bickering and bored whining. But preflight downloads of the stirring songs and speeches of the civil rights movement were transforming the hours on the road into one of our midwinter trip’s unforgettable highlights. Even the 9-year-old sat in enthralled silence, looking out the car window at the damp fields of rural Alabama rolling by as we listened to the voice of the Rev. Dr. Martin Luther King Jr.: “How long? Not long, because the arc of the moral universe is long, but it bends toward justice. . . .”

A rental car with a GPS system is the best thing to happen to family travel since the steam engine. The GPS allows you to get off the interstates and wander along back roads, with no anxiety about getting lost, so you can encounter the out-of-the-way corners where strangers rarely pass but where most of America actually lives. Hickory, Miss., emerged from the pine woods as a jumble of trailer homes and dogs chasing bikes in the brown-dirt streets. In the town of Chunky, we pulled over to read a memorial to the Chunky River Train Wreck, a forgotten calamity in which the Hercules, a Southern Rail Road troop-transport train carrying Confederate soldiers, derailed from a bridge. Outside Selma, I swerved the car into a screeching U-turn as we passed Mama’s Kitchen, an old and dilapidated soul food road house where we ate the best “meat and three” — that is, diner’s choice of one meat-based main dish and three sides — in three states.

The trip began in Birmingham. We’d flown in on a cheap nonstop flight from La Guardia ($180 round trip), and checked into the Elyton Hotel, a fancy joint in a historical 1909 building in the old financial district. The cafeteria line at Niki’s West, an hour after touchdown, snaked out the door when we went for our first taste of the unbelievable Southern panoply of garden vegetables: large lima beans and small lima beans, black-eyed peas and butter beans, collards and rutabagas, northern beans and turnip greens, okra boiled and okra fried. . . .

The next morning we hopped into a small car piloted by one of the best tour guides I’ve ever met: Clay Cornelius of Red Clay Tours, an intense young man with a long beard and a scholar’s passion for the unvarnished history of his home city. He took us to see the landmarks of “Bombingham,” hopscotching around the outer reaches of the town to see the remains of the most violent days of the struggle. The neighborhoods were haunted and haunting: Collegetown, isolated by a warren of freight-train tracks, and Smithtown (or Dynamite Hill).

There were 50 bombings by the Ku Klux Klan on Dynamite Hill between 1947 and 1955, when the school-integration fight was on. Dynamite, Mr. Cornelius explained, was plentiful in Bombingham, because this had then been a mining town. As we drove slowly past, he waved hello to a friend who still lived in his childhood home, which had an unusual architectural feature: a concrete garden wall specially constructed by his activist parents to prevent explosives from being thrown into the yard.

Huddled under umbrellas and raincoat hoods, we visited the Sixteenth Street Baptist Church, where the four little girls were murdered by white supremacists on a September day. (Actually, as Mr. Cornelius explained, a total of six black youths were killed the day of the Sixteenth Street bombing; the other two kids were shot within seven hours of the Sunday-morning blast.) We lingered in awed silence and a gloomy drizzle at another church, Bethel Baptist, where, on Christmas Eve of 1956, the Rev. Fred Shuttlesworth’s house was bombed and he was buried in rubble — miraculously surviving, and going on to lead the city in the fight. In Kelly Ingram Park, which is hallowed ground as the epicenter of the so-called Children’s Crusade, my daughter asked to be photographed with Ronald S. McDowell’s famous sculpture of a police dog rearing up to bite an adolescent boy. (Required listening in the car afterward: the “Foot Soldier of Birmingham” episode of Malcolm Gladwell’s “Revisionist History.”)

­Next stop: Montgomery. We stayed at the Hampton Inn Downtown, a chain hotel in a handsome old building right around the corner from the Legacy Museum (which has been written about extensively, elsewhere, over the last year). We visited the Dexter Avenue Baptist Church and the Dexter Parsonage Museum on South Jackson Street, where Reverend King. lived with his family during the bus boycott of 1955 and 1956. We touched the doorknobs King had touched, and the pit in the concrete porch floor where a white supremacists’ incendiary device exploded in 1956. We were permitted — and this was the most moving five minutes, for me, of our entire weeklong sojourn — to sit down at the formica kitchen table where King had a religious vision late one night.

Our guide for a private tour the evening of our arrival in Montgomery was Jake Williams of My Montgomery, who had been a foot soldier himself as a 12-year-old boy marching from Selma in 1965. He took us to the stop where Rosa Parks boarded the Cleveland Avenue bus the fateful day when her patience with segregation ran out. (Not incidentally, the bus stop is directly opposite the site of Montgomery’s main slave auction site.) At nightfall, the kids posed defiantly for photographs on the front steps of the Alabama State House — a.k.a. the “Confederate White House,” where Jefferson Davis and Confederate States created the Confederacy.

Then the unforgettable 54 miles between Montgomery and Selma — driving in the opposite direction of the protesters’ long walk — listening to fantastic modern gospel on Hallelujah 95.5 out of Jackson. A radio announcer told listeners in Central Mississippi to take shelter from an approaching tornado. Under gray skies we drove slowly over the Edmund Pettus Bridge, then parked on the other side, by the old local newspaper office, to walk the bridge and look down over the Alabama River, which was a muddy green.

Selma, like most of the small towns we stopped in, is a ghostly place. All down Highway 80 — along which we continued westward, all the way into Mississippi — you pass an endless string of nearly empty Main Streets. The stores are museum pieces from the mid-20th century: display cases and wall clocks and cash registers frozen in time from the 1930s or 1960s; antique signs still hanging out front in elaborate neon (Rexall Drugs, the Majestic movie theater) and painted-brick advertising slogans (“Coffee’s Garage”) still slowly fading on the buildings’ sides. The bells on the shopdoors no longer ring. You realize what a catastrophe the rise of the strip mall and subsequent death of Main Street truly was.

This was once such a beautiful nation. Meridian was a way station, an uninspiring night in another chain hotel, another mostly empty town center struggling to reinvent itself amid the miles of homogenous sprawl that encircled it like kuzu vine.

Jackson, Miss., was memorable for another moving and humbling visit to the home of another murdered activist, Medgar Evers — a turquoise-blue 1950s ranch house, where he died in the driveway. (It was also memorable for the pigs’ ear sandwiches at the Big Apple Grill.) We spent the night at the Fairview Inn in Jackson, where we were given a spectacularly huge and beautifully decorated suite so large that — when it came time for them to turn off the television before which they had collapsed to watch Spongebob after an emotionally exhausting day — I had to shout for my kids to hear me from three rooms away. Although both kids were old enough to learn some hard facts about racism and about civil rights, and brave enough to listen to the stories of those who died or were maimed fighting in the cause, I decided not to tell them about the man who had once owned this lovely Southern mansion: He was the founder of Jackson’s Citizens Council, a white supremacists organization, and I worried that he might disturb their sleep.

The everyday food of poor people in Alabama and Mississippi was so much more delicious than expected. We stuffed ourselves on fried fish and yams and turnips, pulling the car to a halt every time we happened upon a soul food shack or barbecue shanty in our slow procession between the cotton fields and cane breaks.

We ended our trip in Memphis with two nights at the Peabody, the grand dame of Southern hotels, a place for drinking bourbon and swimming in a swanky mosaic-tiled swimming pool. I sampled a lethal Jack’s Punch (Jack Daniels, orange and lemon, peach syrup) while the kids observed the famous Peabody ducks making their famous ceremonious waddle through the soaring lobby at the close of the day.

Memphis lifted us up. We headed straight to Soulville, South Memphis, a neighborhood that had once been a center for thriving black-owned businesses, to take a tour of Stax Records. The tour began with a short film featuring the singers and musicians who brought soul music from Memphis to the world: Otis Redding, Carla Thomas, Pops Staples, Melvin Van Peebles. In the film, Booker T. and the M.G.s spoke of what life was like in the days before King was assassinated, spoke about how blacks and whites had once come together at Stax, bringing the country traditions descended from Celtic folk together with black church music and blues, creating “Dock of the Bay” and “(If Loving You Is Wrong) I Don’t Wanna Be Right” and “Green Onions” and “I’ll Take You There.”

On the flight back to La Guardia, the kids said it was the best “vacation” they’d ever had.