New substation to be off Shore Road, between Fort Pond and Fort Pond Bay 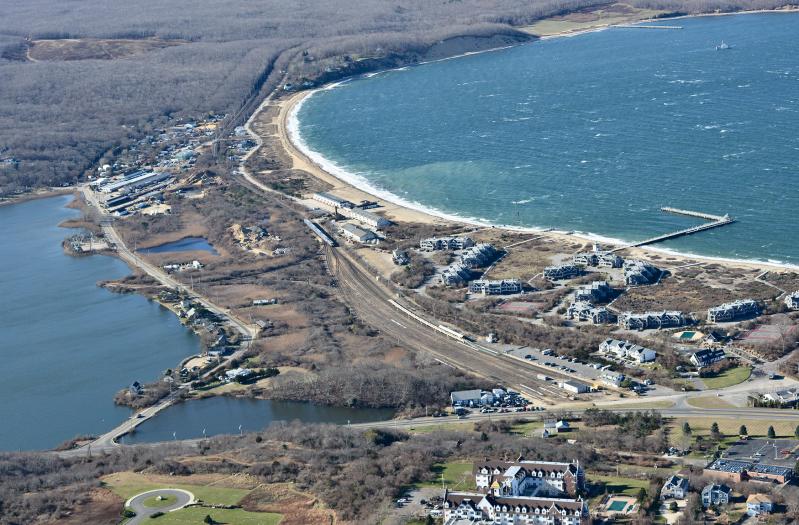 PSEG’s current substation is on a parcel off Industrial Road that juts into Fort Pond, at left. The site for a new substation will be nearby off Shore Road between Navy and Industrial Roads.
Doug Kuntz
By Christopher Walsh

East Hampton Town Supervisor Peter Van Scoyoc announced on Tuesday that PSEG Long Island, which has been exploring alternative sites for an updated electrical substation to replace one on Industrial Road in Montauk, will abandon a proposed site in Hither Woods and build a new substation on a Long Island Power Authority-owned parcel on Shore Road, near the site of the present facility.

Mr. Van Scoyoc secured the utility’s agreement to locate the substation in an industrial area during a conference call on Monday, according to a press release from his office.

The town’s Local Waterfront Revitalization Program, or L.W.R.P., cites the substation in its present location as “a concern during flood conditions and hurricane overwash” and says it is “inconsistent with floodplain management.” If not for its elevation on fill, the substation would be submerged in any heavy rains, according to the L.W.R.P., which specifically recommends its relocation “to an alternative site such as the former town landfill in Hither Woods, or elsewhere out of the flood zone.”

The East Hampton Trails Preservation Society announced its opposition to the Hither Woods site last week, complaining that a substation there would be directly beside, if not atop, the 125-mile long Paumanok Path. The utility, which manages the electrical grid on behalf of LIPA, had earlier abandoned proposed sites in Eddie Ecker Park and

off Flamingo Avenue in Montauk, after the community came out in force against them. A group calling itself Montauk United said that siting a substation off Flamingo Avenue had the potential of “becoming one of the greatest ongoing man-made calamities in the history of Montauk.”

The existing substation is 101 years old and sits on a gravel-fill site that juts into Fort Pond along the low-lying Industrial Road. A 2017 analysis prepared by PSEG Long Island noted that it is approximately five feet above mean sea level, one to two feet above the elevation of Fort Pond, and experiences regular flooding, which has deteriorated the infrastructure.

The utility analyzed approximately a dozen vacant properties. Few were deemed viable in terms of size, proximity to electrical infrastructure, land-use designation, or other considerations such as the presence of wetlands. Property near Montauk’s former landfill in Hither Woods became a popular option among many of the hamlet’s residents after an informational meeting this spring, but the area is parkland, and a substation there would require approval of county and state legislatures for parkland alienation. It would also have required significant clearing and is farther from the grid than other proposed sites. The trails group stridently opposed that location.

Although Mr. Van Scoyoc had previously described the site north of the former landfill as “more sustainable and resilient, given its higher elevation,” he said in the press release on Tuesday, “I cannot support the alienation of parkland near the Paumanok Path. . . . Like so many residents who have written to me to oppose the industrialization of this area, I want to see this area remain pristine and protected.”

After a review, PSEG Long Island chose a parcel between Shore Road and Industrial Road that is at a higher elevation than the current site, though like the existing substation it is also in a floodplain. To better protect the substation infrastructure on the Shore Road site, which is adjacent to the location of an energy storage battery facility, PSEG Long Island will raise the level of both the substation equipment and of the road, and install drainage structures in order to alleviate persistent flooding in the vicinity. In addition, it will screen the equipment from sight. The existing substation will be dismantled, and PSEG Long Island and the town will restore the site, allowing for the public’s use of the waterfront and access to the pond, according to the press release.

“I applaud PSEG Long Island for responding to my request to engage with the community and work cooperatively to find an acceptable location for the electrical infrastructure needed in Montauk,” Mr. Van Scoyoc said in the release.

Elizabeth Flagler, PSEG Long Island’s head of external communications, said in an email on Tuesday that “PSEG Long Island worked with the town’s supervisor and leaders, listened to the concerns of the community, and is pleased to have found an agreed upon location that will support the energy requirements of Montauk.”