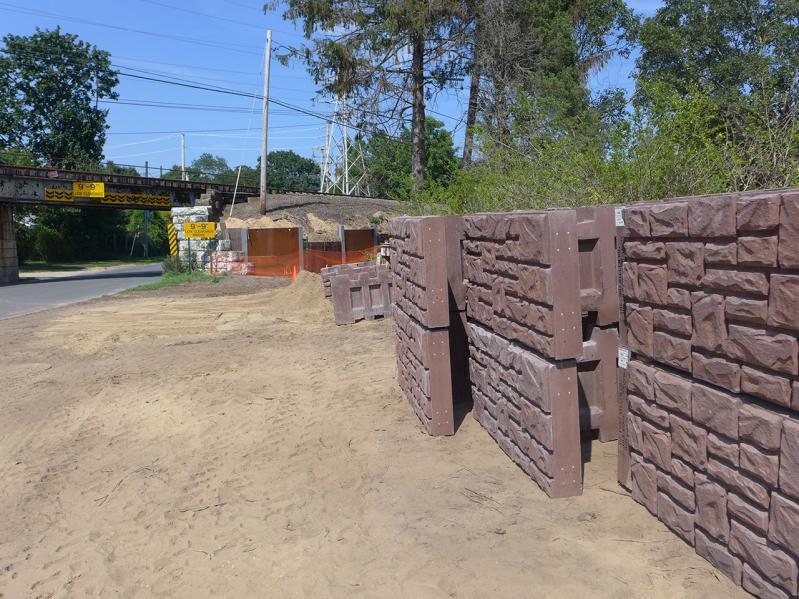 Representatives of the Long Island Rail Road provided an update on the work being done to replace the railroad trestles crossing North Main Street and Accabonac Road in East Hampton Village at a village board meeting on Friday.

The low trestles, which are infamous for being struck by trucks, will be raised from 11 to 14 feet when new bridges are installed this fall.

“We at the railroad have been eagerly looking forward to the replacement of these bridges for a long time and it’s finally happening,” said John Kettell, a structural engineer.

The first phase of the project began last August with the construction of retaining walls. One retaining wall, on the south side of North Main Street, remains to be built, said Daniel Knote, a project manager.

Over the next couple of weeks, prior to the wall being constructed, a contractor will prepare the site, which presents a topographical challenge, said Mr. Knote. “In order to put in the retaining wall, because it’s a deeper dig, we need to put in a support for excavation to keep our trains and tracks safe, and to keep the community and village streets safe,” he said.

Equipment and materials will arrive on Hook Mill on Road July 8, he said, and on July 15 a crane will be erected, and the installation of the support will begin. That work will proceed through the end of the month, after which work on the retaining wall will start.

There will be road closures between 7 a.m. and 5 p.m. during that time.

In August, prep work to install the new foundations for the bridges will start on site. The foundations will consist of four six-foot-round caissons for each structure. A shift in Accabonac Road will be necessary to make room for the foundation, he said.

Drilling the caissons, which will go about 75 feet deep, will begin in September.

“The caisson work may be a little noisy,” said Vanessa Lockel, a government and community affairs liaison with the L.I.R.R. “But these guys are professional and know how to mitigate that.”

Between Oct. 15 and Nov. 10, the Montauk train line will be shut down so the old trestles can be removed and the new ones installed. Ms. Lockel said the railroad plans to provide alternate transportation for riders, including those who use the commuter connection.

About two weeks before the tracks are shut down, said Mr. Kettell, the new bridges will arrive by truck overnight and be placed on Hook Mill Road.

“You’ll wake up one day and see the two bridges there, ready for placement,” he said.

The trestle over Accabonac will be replaced first, followed by the North Main Street one. Road closures will be necessary, but at least one of the streets will remain open throughout the project.

Mr. Kettell said the L.I.R.R. will work with the village to formulate a traffic plan. In early October, programmable LED signs will be installed near the site to alert drivers to road closures and traffic patterns.

Crews will be working round the clock between Oct. 15 and Nov. 10, said Mr. Knote. In addition to installing the trestles, they will raise more than 1,100 feet of track approximately three feet.

“We do understand that people have to sleep, and we’re going to concentrate as much of the noisy work during the day, but there will be some inconvenience at night,” said. Mr. Knote.

Rose Brown, a village trustee, inquired about how the L.I.R.R. would address landscaping after the work is done, and Mr. Knote said a plan would be developed by late July or early August.

Mayor Paul F. Rickenbach Jr. asked if the Metropolitan Transit Agency, which oversees the L.I.R.R., would provide police to help direct traffic. At every major new phase of the project, said Mr. Knote, he would call in M.T.A. officers to make sure traffic is flowing well. “I’m not looking to burden your system and your forces,” he said.

Ms. Lockel said a guide giving details about the ongoing work will be made available to the public in the coming weeks.