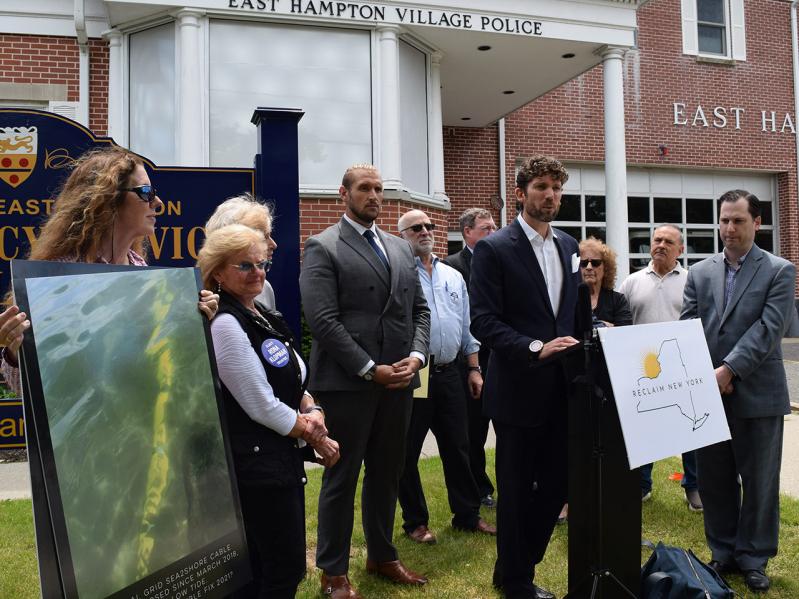 Simon Kinsella, at podium, has led an effort to stop an electrical cable supplying power from the planned South Fork Wind Farm from coming ashore at Beach Lane in Wainscott.
Christopher Walsh
By Christopher Walsh

Simon Kinsella, a resident of Wainscott, a candidate for East Hampton Town Trustee, and a persistent critic of the proposed South Fork Wind Farm, spoke during a press conference Tuesday about his lawsuit against New York State, which seeks to compel the Long Island Power Authority to disclose the cost to ratepayers represented by the proposed wind farm.

The press conference, which included officials of Reclaim New York and the Government Justice Center, both of which work to hold government accountable, took place outside the Emergency Services Building in East Hampton. Inside, the State Public Service Commission was about to hold an informational forum and public statement hearing on the wind farm.

Neither LIPA nor the wind farm’s developer has disclosed costs in their power-purchase agreement. LIPA calls those details a trade secret.

“We are here today to demand that the State of New York, the Comptroller’s office, and Deepwater Wind disclose the price that all New Yorkers will have to pay for this project,” said Jadan Horyn, Reclaim New York’s director of communications. Deepwater Wind, before its acquisition last year by the Danish energy company Orsted, proposed the 15-turbine South Fork Wind Farm. The company is now known as Orsted U.S. Offshore Wind.

Mr. Kinsella “has an interest in all information relating to the project,” said Cameron Macdonald of the Government Justice Center, “so New Yorkers, and especially Long Islanders, and especially people in this community, can understand what the cost of this project is truly going to be and what its ramifications are, and make a decision about what they want and what makes good economic sense.” The comptroller’s office, he said, “has refused to provide the information that’s been redacted at Deepwater’s behest.”

The proposed wind farm, Mr. Kinsella said, “has many questions that are unanswered. These questions shouldn’t negate offshore wind in general. Offshore wind has a part to play in a future that is powered by renewable energy. I’m not against offshore wind, nor am I against the people at Deepwater Wind.”

He is, however, against the proposed wind farm, Mr. Kinsella said. Orsted U.S. Offshore Wind is denying “necessary information that we, the public, need to make informed decisions on the merits of the case.” If the wind farm’s impact on the price of electricity is not disclosed, “there’s a cloud over the entire program,” he said.

“There’s a breach of public trust,” said Mr. Kinsella, who had addressed the Amagansett Citizens Advisory Committee on the same subject the night before. “It’s going to take a lot of effort for Deepwater Wind to overcome that breach of trust.”