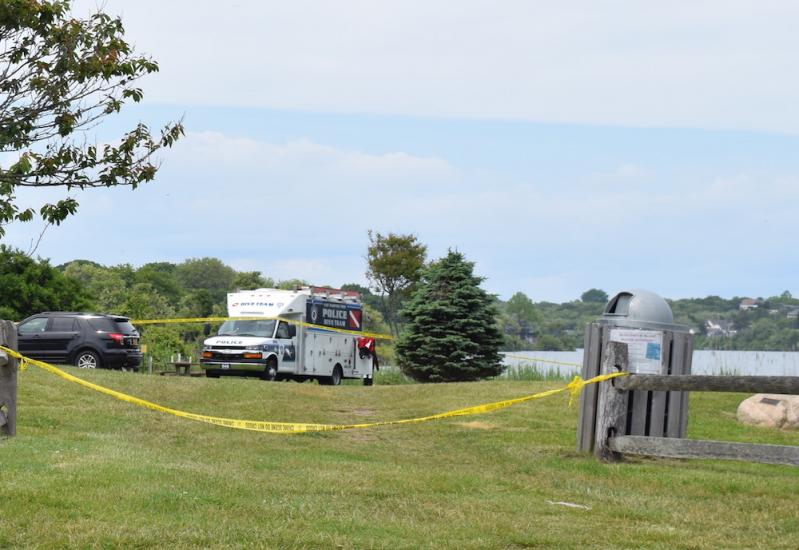 The East Hampton Town Police dive team was on the scene at Kirk Park on Friday.
Christopher Walsh
By Taylor K. Vecsey

The family of the man who was killed in Montauk last week is preparing for his funeral services, while homicide detectives continue to investigate what led to his death on a path in Kirk Park.

Robert Casado, a 38-year-old Montauk resident whose nickname was Panda, was a native of the Dominican Republic. His father, Benny Garces, who has long worked at Gurney's in Montauk, and his family "have been devastated by the loss of  their son," according to Michael Nenner, who created a GoFundMe account for Mr. Garces on the fund-raising website.

They are planning services and will send Mr. Casado's body back to the Dominican Republic this weekend. But first, the family will receive visitors at Yardley and Pino Funeral Home in East Hampton on Wednesday from 4 to 8 p.m.

"We've started a GoFundMe to assist Benny and his family with the payment of these arrangements. Please join me in contributing to our friend and Gurney's family member," Mr. Nenner wrote.

Suffolk County Police Detective Lt. Kevin Beyrer, chief of the county's homicide squad, said police are investigating Mr. Casado's death as a murder. As of Tuesday morning, no arrests had been made.

Park-goers found Mr. Casado unconscious and with a serious head injury on a walking trail in the park that runs between Main Street and Second House Road on Thursday morning at about 7:30 a.m. Police believe the victim entered the park only half an hour earlier.

The Montauk Fire Department transported the man to Stony Brook Southampton Hospital, where he was pronounced dead.

East Hampton Town police called in the Suffolk County Police Department Homicide Squad to handle the investigation. "We do not believe this was a random attack," Lieutenant Beyrer said by phone on Thursday afternoon.

Lieutenant Beyrer could not specify what caused the head trauma and said that the Suffolk County medical examiner's office will determine the specific cause of death.

The East Hampton Town police dive team was seen searching Fort Pond in Montauk looking for a murder weapon. As of last week, none had been found.

Both town and county police officials dismissed rumors that Mr. Casado's death was gang-related or a bias-crime.

Detectives are asking anyone with any information regarding any suspicious activity or a suspicious person in the area between about 6:40 and 7:30 a.m. on Thursday to call the homicide squad at 631-852-6392, Crime Stoppers at 1-800-220-TIPS, or the East Hampton Town Police Detectives at 631-537-7575. All calls will be kept confidential.