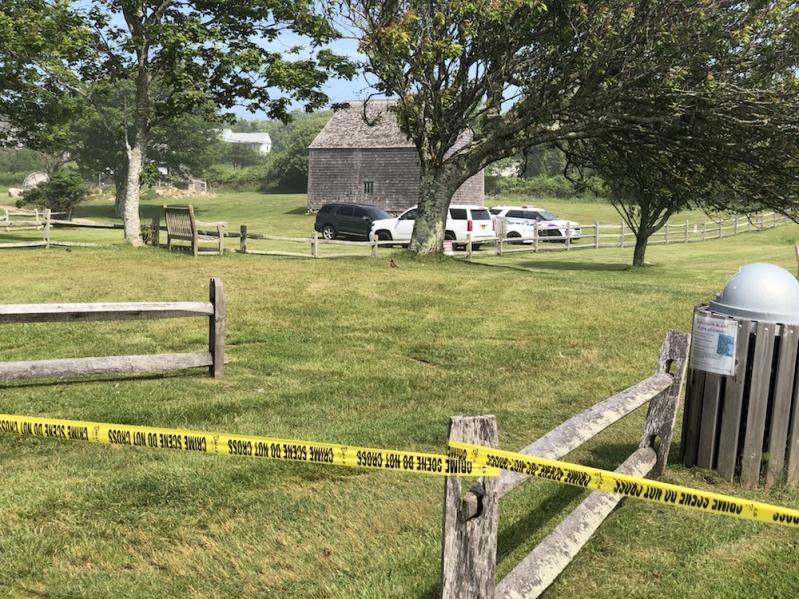 Crime scene tape blocked off Kirk Park in Montauk on Thursday morning after a man was found unconscious there at about 7:30 a.m.
Carissa Katz Photos
By Taylor K. Vecsey

Update, June 7, 1:30 p.m.: Suffolk County police have identified the man killed in Kirk Park in Montauk on Thursday morning as Robert Casado. Mr. Casado was 38 and lived in Montauk. No further information was released.

Originally, June 6: A man who was found unconscious and with a head injury in Kirk Park in Montauk on Thursday morning has died and police are investigating his death as a murder, Suffolk County Police Detective Lt. Kevin Beyrer, chief of the county's homicide squad, said Thursday afternoon at the park.

The 38-year-old man, a resident of Montauk whose name has not yet been released, was found on a walking trail in the park, which runs between Montauk Main Street and Second House Road, just before 7:30 a.m., according to Town Police Chief Michael Sarlo. Two people visiting the park discovered the man, Lieutenant Beyrer said during a briefing at the park Thursday afternoon. Police believe the victim entered the park shortly after 7 a.m.

The Montauk Fire Department transported the man to Stony Brook Southampton Hospital, where he was pronounced dead.

Suffolk County Police Department homicide detectives are handling the investigation. "We do not believe this was a random attack," Lieutenant Beyrer said by phone on Thursday afternoon.

Lieutenant Beyrer could not specify what caused the head trauma. He said the Suffolk County Medical Examiner's office will determine the specific cause of death.

Police have tentative confirmation of his identity, but are waiting to release his name until he has been positively identified.

"The incident does not appear to be gang-related or a bias crime," Chief Sarlo said.

No arrests have been made and no one is in custody at this time.