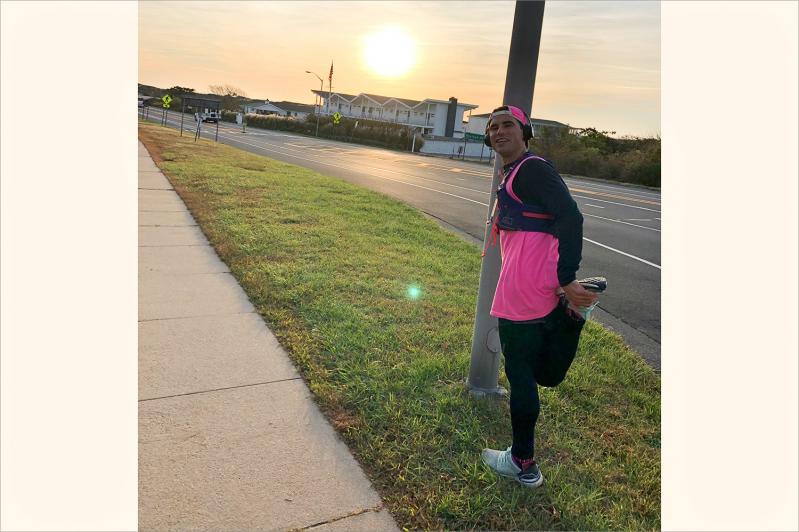 Anthony Daunt was still smiling as he got ready in Montauk to run his seventh marathon in seven days.
Richie Daunt
By Jack Graves

Anthony Daunt, who in Iceland last December became the 25-to-29-year-old world Spartan Ultra champion — a title he is to defend in Sweden soon — ran seven marathons in seven days on the South Fork between Oct. 19 and Oct. 25, raising close to $14,000 through a GoFundMe account on behalf of a relative who had recently undergone a breast cancer operation.

“She’s okay; she’s keeping her spirits up,” the quiet-spoken Groundworks Landscaping general manager said during a conversation there the other day. “She didn’t ask for it. She doesn’t like to ask for help, but I had her permission — she was happy I did it. She was blown away.”

Rising daily at around 2 a.m., using an app as a gauge and sometimes wearing a headlamp, the Springs resident traversed the highways and byways of the South Fork, 183.4 miles all told, progressing in stages along planned circular routes through Sag Harbor-Shelter Island, Southampton, Springs, Bridgehampton-Sagaponack, East Hampton, Amagansett, and Montauk.

Asked if he’d found the scenery pleasant, the ultramarathoner said with a smile, “Yeah, I ran on a lot of roads that I’d never been on. . . . My brother [Richie] ran with me on the last leg in Montauk. I ran some on the stretch and did four loops around the lake and up toward the cemetery and back down to town. I was definitely feeling it by then.”

He worked on those days too, though his schedule was flexible. Groundworks, he said, had been “super supportive.”

“She’ll have a lot of bills,” he said of his relative, who is undergoing chemotherapy now, “but I wanted her to feel supported. I wanted to keep her spirits high.”