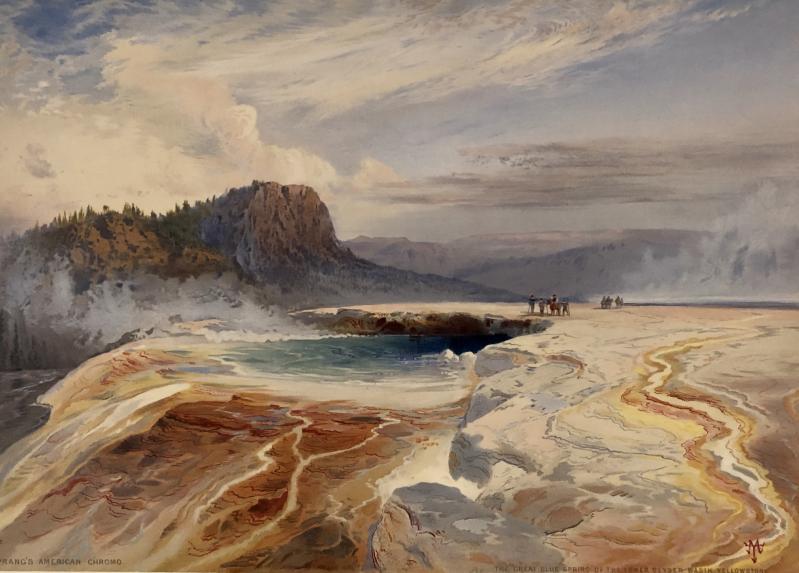 "The Great Blue Spring of the Lower Geyser Basin, Yellowstone" is a chromolithograph made from a painting by Thomas Moran in 1875
Department of the Interior, Yellowstone National Park
By Jennifer Landes

After years of discussion, restoration, and reconstruction, the Thomas and Mary Nimmo Moran Studio, open to the public for two seasons, is still not finished, but it is well on its way.

Closing on Sunday is the second annual exhibition the East Hampton Historical Society has mounted there, “Thomas Moran Discovers the American West.” The show demonstrates how the paintings Moran worked on after his trip to Wyoming inspired the National Parks System and National Parks Service.

On a more local level, the installation is a visual explanation of “how he became important and had the money to build this studio,” said Richard Barons, the chief curator for the historical society, during a recent tour. He organized the show and will be available over the last days of the exhibition to lead viewers through the journey as described by the works on view.

Last year, the studio reintroduced the Morans to the East Hampton community through their etchings. Next year, the annual show will focus on their artistic circle and friends.

The historical society serves as the steward organization for the building, its contents, and programs. While it has based its seasonal programs on short and long-term loans, it has concurrently begun to amass a permanent collection for the site.

The acquisitions include 28 etchings, a Mary Nimmo Moran painting of the garden that served as the plan for the Moran garden’s restoration, and a painting by Paul Moran of the same garden from a different vantage point. Paul, one of the couple’s three children (including two daughters, Mary and Ruth), went blind not long after completing the work. The paintings hang in view of the garden.

Many works were acquired from Terry Wallace of the East Hampton gallery and through a grant from the Robert David Lion Gardiner Foundation, which also covered some of the works on view at the Gardiner Mill Cottage, which opened this year.

There are additional promised gifts and an extended loan of a painting inspired by Moran’s trip to Venice, where he bought the gondola he took around Hook Pond. The house is set up with antique furniture in the living areas and temporary exhibition partition walls in what would have been Moran’s actual studio space, a big main room to handle the large-scale canvases he executed of places like Yellowstone.

In the entryway off the back by what is now the parking area, a group of photographs and etchings tell the story of Moran’s trip with the Hayden Expedition to Wyoming in 1871, showing some of his fellow travelers and the sites they visited.

Much of this year’s loan exhibition is culled from what was available in the Yellowstone National Park collection, or from the National Parks Service and the Department of the Interior. There are also works on loan from the East Hampton Library, Guild Hall, and the Parrish Art Museum, which had an early board president, Rebecca Bolling Littlejohn, who donated several of Moran’s wood engravings to the Parrish’s collection.

In addition, the show includes paintings, chromolithographs, the artist’s Stetson hat with a photograph of him in it, and a gun with which he shot two rattlesnakes and a cougar. A sketchbook has been reproduced on video so that viewers can experience the images as if they were turning each page. There are also maps, stereographic cards, palettes, and brushes on view.

The house itself is interesting, too, with pendant paintings decorating the carved recesses in the fireplace mantelpiece and a collection of windows and doors salvaged from places like a late-19th century candy and cigar store in Manhattan. Although in a revival of an earlier style of architecture, the windows have a more modern look, and the beige color the family painted the house was likely chosen to mimic the color of new wooden shingles and to stand out among its gray neighbors, Mr. Barons said.

The near-term work in the house will include hanging picture rail below the trim in some of the rooms and wallpaper in the bedrooms. The three buildings on the property — a small cottage Moran used in his later years to avoid using the stairs, the gondola storage shed, and the family’s beach cabana — will be rejuvenated in future projects.

Even those who cannot squeeze in a trip this weekend will have an opportunity to see the house again later this year when it reopens on Saturdays in December for its annual Christmas exhibition. The house will be decorated for a Victorian Christmas celebration, and the historical society’s collection of antique toys, once displayed at Clinton Academy, will be on view at the Moran house as part of this new East Hampton tradition.