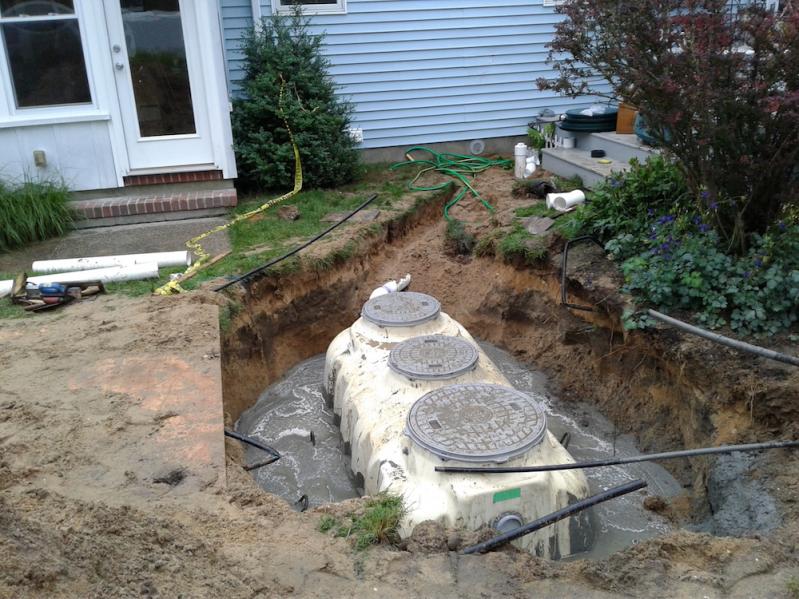 A new, low-nitrogen septic system called the FujiClean CEN was installed recently at a house in Jamesport.
Suffolk County Department of Health Services
By Christine Sampson

Data released last week by Suffolk County show that low-nitrogen septic systems approved by the county’s Department of Health Services are performing, on average, as originally anticipated or better.

Increased nitrogen in the water has been identified as a pollutant that can lead to harmful algal blooms, fish kills, and other problems.

Both East Hampton Town and South­ampton Town have enacted legislation that in some cases requires low-nitrogen systems, also known as “innovative/alternative” or I/A systems, to be installed when new construction or substantial renovations take place. Both the towns, as well as the county, are offering rebates for homeowners who are either mandated to or voluntarily choose to upgrade their homes’ previous septic systems.

“Over the last 12 months they’ve all been pretty consistent at 19 milligrams or less,” Mr. Jobin said. “On a watershed or countywide basis, the systems are doing exactly what we expect them to do.”

About 550 such systems, chosen from among six different types, have been installed throughout the county so far, Mr. Jobin said. Of those, 187 were eligible for the rebates offered by the county; East Hampton Town has rebates for 125 low-nitrogen systems and Southampton Town for 175 systems.

Of the six types of I/A septic systems, the top-performing brands so far are the Hydro Action, Fujiclean, and SeptiTech, according to county data compiled through Sept. 27 and provided to The Star.

“We were concerned and we reached out to the manufacturers,” Mr. Jobin said. “Norweco sent people out from their main office in Ohio and did some adjustments to their systems and maintenance practices, and the numbers dropped considerably. For the Orenco, there was a maintenance issue that was corrected.”

All 550 I/A septic systems in Suffolk County are still in the “provisional” phase of operation, meaning they are tested more often and may require more frequent attention. Once a certain amount of time has passed for each system, and test results show they consistently meet the standard of 19 milligrams or less, they will be moved up to the “general” operation phase.

“We’re not there yet on all of those systems,” Mr. Jobin said. “There have been significant improvements. We’re building a statistically valid data set but at the beginning there may only be a handful of systems [to test].”

The Hydro Action system was the low-nitrogen option chosen by the Springs School District for its septic upgrade. That system is scheduled to be completed later this month, according to Chris Weiss, the vice president and director of wastewater engineering for H2M Architects and Engineers.

During a recent Springs School Board meeting, the school administrators were pleased to learn that their type of septic system was performing well in other parts of the county. Representatives of the Shelter Island School District have even visited Springs to investigate whe­ther a similar system would work for their building.

Mr. Weiss said this week that it’s hard to measure the impact that the hundreds of I/A septic systems are having so far.

“I think it might still be a little too early in some cases because there are only so many installed, and it depends on how many have been installed in a certain drainage area,” he said. “If you have a lot in one area, the impact will be easier to track than if you have a few scattered around.”

However, he said, “Based on the sheer success of the systems being able to hit 19 milligrams per liter or less indicates a movement in the right direction, and a success with regard to lowering nitrogen in groundwater and the surface waters. There’s no doubt that there’s a benefit, because it’s better than what was done before.”

When it’s done, Mr. Weiss and Mr. Jobin said, the Springs School’s new septic system will likely be a low-nitrogen model for other municipalities and public structures, particularly since the school has also partnered with a state agency, the New York State Center for Clean Water Technology at Stony Brook University, for an additional “polishing unit” for the septic system. The polishing unit, consisting of a wood-chip filtering system, is expected to lower nitrogen levels even further at the school.

“We’re really excited about this one,” Mr. Jobin said,”because we think that it has great potential to show the amount of reduction you can get from just I/A in a really concentrated environment and additional removal through the polishing unit.”