Many theories about a massive scallop die-off 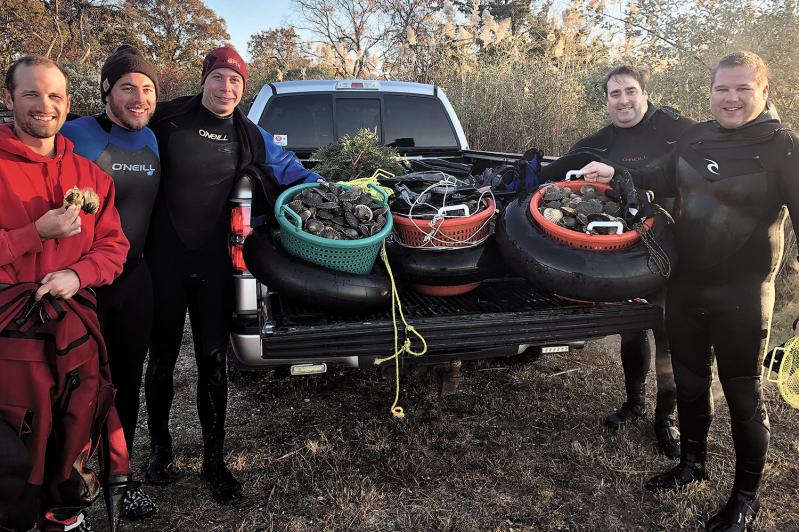 Just about the only people coming up lucky with scallops were a group of friends who dived for them in Southampton Town waters. From left, Ryan Miller, Max MacBarb, Andrew Cassel, James Duryea, and Rick Fowler collected about 35 pounds of scallops on Monday.
Courtesy of Andrew Cassel
By Christopher Walsh

Baymen and lovers of shellfish can hold on to hope that East Hampton waters will offer an abundant crop of bay scallops when they open to the annual harvest on Sunday, but if the first days’ harvest in state waters is an indication, they will be disappointed. There are several theories, but one certainty is a massive die-off of adult scallops in the region.

“They all died,” Danny Lester, an Amagansett bayman, said on Tuesday. “We already looked. We looked two weeks ago and everything was dead.” In town waters, he said, “there’s a few. Not enough to amount to anything.”

“No scallops this year,” Stuart Heath, a Montauk bayman, said. “Everything died.”

Barley Dunne, the director of the town’s shellfish hatchery, which seeds town waterways with scallops, clams, and oysters each year, was somewhat more hopeful. “It sounds like everything in the Peconics is dead,” he said yesterday, “but stuff in the inner harbors seems to be fine. I just got out of a Southampton water body and it’s pretty good. I’m seeing the usual level of dead, but a lot are alive, large, and healthy.”

But at the Seafood Shop in Wainscott, “It’s the worst of the worst news,” Alex Fausto said on Tuesday, referring to reports of a paltry harvest. “When they open in town waters, maybe it will be a little different. Who knows? But it looks very, very bad.”

With no sign of a usual culprit — the harmful algal blooms that decimated the region’s bay scallop population in the 1980s — causes including unusually high water temperature and low dissolved oxygen are seen as likely factors in mortality.

“Up until end of June, everything looked fine,” Stephen Tettelbach, a shellfish ecologist who conducts population surveys as part of Cornell Cooperative Extension’s shellfish restoration efforts, said yesterday. “There had been a really big set of scallops last year, especially in the western and central part of the Peconics. So the expectation, the hope was that this year was going to be a real good year.”

But sometime between the end of June and the beginning of last month, Dr. Tettelbach said, “there was a big die-off of adult scallops. When we went back on October 1, all through the month we saw population declines at different sites of 95, 99, even 100 percent at some locations. We really did not find any places where there were any real concentrations of high numbers of scallops.”

Dr. Tettelbach, who is a professor emeritus of biology at Long Island University, said algal blooms could not be responsible. “There’s been no brown tide in the Peconics since 1995. This year, there was basically no rust tide, which has been implicated as a cause for mortality in the past. . . . From all those pieces of information, it’s safe to say this was not due to a harmful algal bloom.” A bloom that affected scallops would likely have affected clams and oysters as well, he said. “There’s no indication of that.”

Another possibility — disease — was also unlikely, he said. “There’s a lot of juveniles. One would expect if it were a disease it would have affected both adults and juveniles.”

That leaves predation or environmental conditions, he said. “I’m leaning toward, at this point, high water temperature and low dissolved oxygen.” U.S. Geological Survey records for Orient Harbor and the mouth of the Peconic River, he said, proved those conditions this year.

“I’m leaning toward some physiological stress to adult scallops, probably related to spawning. Spawning is a stressful activity for scallops, and I’m guessing that the timing of spawning this year may have coincided to a large degree with high temperatures and low dissolved oxygen. I don’t have firm data, but that would be my best-guess conclusion. I’m saying that’s probably related to climate change.”

A wildcard, he said, is predation by fish, crabs, and whelks, “but that’s primarily taking place on juvenile scallops. There are a lot of blowfish this year. Our understanding is they primarily eat juvenile scallops, not adults, so I don’t think they can be the cause.”

Another possibility is the cownose ray, which Dr. Tettelbach said is primarily a southern species but one that was seen in local waters this year and has appeared here previously. “They are definitely animals that will and do eat adult scallops — in fact, they wiped out most of the population in North Carolina in the 1990s. One of the baymen from Southold told me he saw some of those in Hallock Bay this year, which is connected to Orient Harbor. They’re in the Peconic system, we just don’t know how many of them there are, and whether they could have caused this level of die-off.”

But, he added, “We saw lots of dead adult shells, which suggests a cause other than rays, because they will crush the shells.”

“That’s been debunked,” Mr. Dunne said of the cownose ray theory, “because the shells are intact. I don’t get it.”

“Friends who are in the oyster-growing business said this was one of the best years they’ve ever seen for oyster growth,” Dr. Tettelbach said.

But the proliferation of commercial and recreational oyster farming, Mr. Heath suspects, may be having an unintended consequence. “The water is crystal clear,” he said. “Everyone keeps raving about these oysters. I don’t think it’s such a good idea, because they’re competing for the algae” — not harmful blooms, but rather beneficial algae on which shellfish feed.

“In my opinion, everyone promoting the public growing oysters is a big mistake. . . . If there’s nothing in the water column for them to eat, how can they survive?”