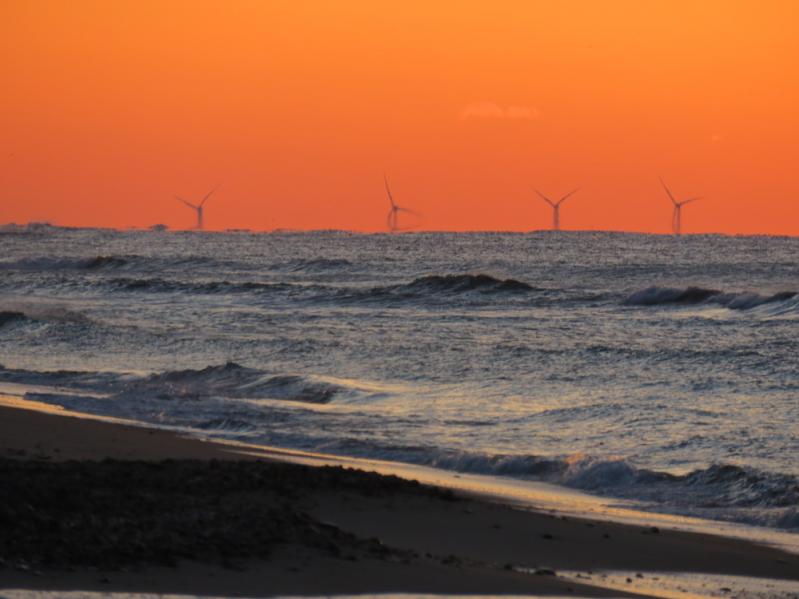 The United States has just one operational offshore wind installation, the five-turbine Block Island Wind Farm, which can be seen from Montauk.
Jane Bimson
By Christopher Walsh

According to a report issued by the International Energy Agency, offshore wind is capable of generating more than 18 times the current global electricity demand and is poised to become a trillion-dollar industry over the next 20 years.

The United States “has good offshore wind resources in the northeast of the country,” the report states, as well as electricity demand along the densely populated East Coast. “Floating foundations would expand the possibilities for harnessing wind resources off the West Coast,” according to the report.

Though the United States has just one operational wind farm, the five-turbine Block Island Wind Farm, others, including the South Fork Wind Farm, a 15-turbine, 130-megawatt installation to be situated approximately 35 miles off Montauk, are in various stages of development. The South Fork Wind Farm, a joint venture of Orsted U.S. Offshore Wind and Eversource Energy, is at present before New York State and federal regulatory agencies.

The release of Offshore Wind Outlook 2019 came two days after Gov. Andrew M. Cuomo announced that the New York State Energy Research and Development Authority had finalized contracts with Orsted and Eversource for the partners’ 880-megawatt Sunrise Wind, as well as with Equinor Wind US L.L.C. for its 816-megawatt Empire Wind project. The governor’s Green New Deal includes development of 9,000 megawatts of offshore wind by 2035.

Europe, which pioneered offshore wind technology, is likely to continue to lead development, and offshore wind is poised to become the largest source of the continent’s electricity by 2040, the report says. Its present capacity of almost 20 gigawatts would reach nearly 130 gigawatts by 2040 under policies now in place. If European Union goals for carbon neutrality are met, capacity could reach 180 gigawatts by 2040.

China will also play a significant role in offshore wind’s long-term growth, the report says, and will likely have the largest offshore wind development of any country (the United Kingdom is the current leader). Offshore wind farms can be built near major population centers in the country’s east and south, and the country’s capacity is set to increase from 4 gigawatts today to 110 gigawatts, perhaps even to 170 gigawatts, by 2040.

While offshore wind now provides 0.3 percent of global power generation, development of floating turbines that could be deployed farther out at sea could further drive the offshore wind industry’s growth. “In theory, they could enable offshore wind to meet the entire electricity demand of several key electricity markets several times over, including Europe, the United States, and Japan,” the report states.

But offshore wind’s potential won’t be fully realized without governments’ long-term vision to encourage industry and investors, the report says.

“Industry needs to continue the rapid development of the technology so that wind turbines keep growing in size and power capacity, which in turn delivers the major performance and cost reductions that enable offshore wind to become more competitive with gas-fired power and onshore wind,” the report summarizes.

“What’s more, huge business opportunities exist for oil and gas sector companies to draw on their offshore expertise. An estimated 40 percent of the lifetime costs of an offshore wind project, including construction and maintenance, have significant synergies with the offshore oil and gas sector.”