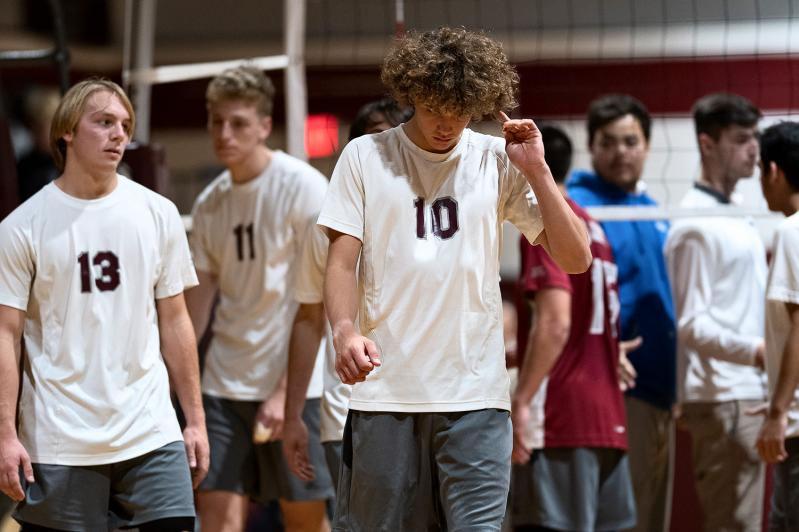 The season ended for East Hampton High’s girls and boys volleyball teams this past week as both squads were ousted in county Class A semifinal matchups.

The girls went down in three at Hauppauge on Nov. 5 after having played well, their coach, Alex Choi, said, in the first two sets, and the boys, playing at home Friday, went the distance, losing 15-8 in the decisive fifth set.

Why that fifth set was shortened — customarily sets are played to 25 provided the winning team is up at the time by at least 2 points — nobody knew other than to say that’s the way it is now.

“I think the shorter fifth set, to 15, was first used in collegiate women’s volleyball because the women’s rallies were longer than the men’s,” said East Hampton’s coach, Josh Brussell. “This is the third year, I think, that they’ve had this.”

The teams were evenly matched, though the Bonackers were always playing catch-up. Hauppauge won the first 26-24, East Hampton won the second 25-23, the Eagles won the third 25-19, East Hampton won the fourth 25-20, and the visitors, after Clark Miller’s kill over two would-be blockers tied the count at 1-1, reeled off 5 straight points before the Bonackers, again with a kill by Miller, to the endline, got on the scoreboard again.

Often fourth-set comebacks were followed by fifth-set letdowns, said Brussell, who had told his charges going in that Hauppauge would be tough, that there were no guarantees, even given the fact that the Bonackers had bested the Eagles in five on Sept. 19.

Asked to pinpoint, if he could, the main reasons for the loss, East Hampton’s coach, who will lose 10 seniors to graduation, said, “We played defense too much rather than take control on offense. . . . Our passing could have been better, and we missed some serves at key times, but mainly we didn’t dictate the points as we should have.”

He will definitely miss his four seniors, three of whom — the outstanding middle hitter, Mikela Junemann, the setter, Molly Mamay, and Zoe Leach, an outside hitter — started, but can once again expect to have a strong team again next fall, as the junior varsity, coached by Summer Foley, went 7-3.

“I’d like more of them to play during the off-season,” Choi said in reply to a question. “But I know it’s a long way to

drive. There’s nothing [in the way of off-season competition] out here.”

Foley, when questioned, said four or five of her jayvee players ought to go up to the varsity next season.

East Hampton’s girls finished at 10-4 over all, the boys at 10-5, attesting to the sport’s strength here.

Brussell, as aforesaid, will lose 10 to graduation, but he’ll have the libero, Tucker Genovesi, back, as well as Travis Wallace, an effective hitter and blocker, and John Rutkowski. Alex Lombardo, a freshman who was brought up from the 8-8 jayvee for the playoffs, is expected to replace Morgan Segelken, a senior, as the setter.

Buoyed by “Let’s go, Bonac!” chants, rhythmic stomping in the stands, and a wader-clad, flag-waving mascot, East Hampton ran the second set out thanks to a floating ace served up by Logan Gurney followed by a mid-net kill by Miller, who had been set by Segelken.

The visitors outscored the Bonackers 8-2 in crunch time of the third, pulling away once the score had been tied at 17-17 following a kill by Chris Boudreau. Successive kills by Alex Knopf and Chris Leoni capped the 25-19 win.

With the score tied 20-20 in the fourth, Gurney’s tip over two would-be blockers gave East Hampton the lead, and, with Genovesi serving, the Bonack-

ers ran it out by way of a Hauppauge double-hit, a double block by Miller and Wallace, a kill by Gurney, and a hitting error by Boudreau.

A serving error by Genovesi began the pivotal fifth, an omen as it turned out, for East Hampton’s winners were to be overshadowed by errors thereafter. When the teams switched sides, the Eagles were up 8-2; the die had been cast.