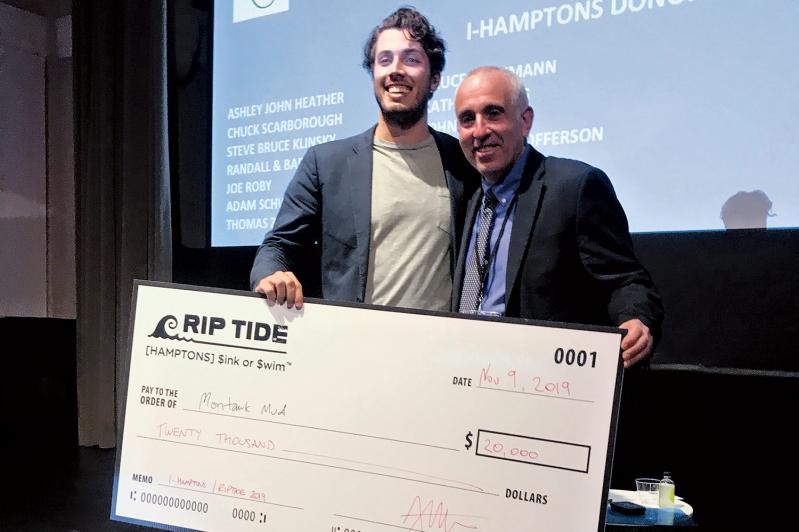 Collin Kavanaugh, who founded Montauk Mud with Elias Van Sickle (not pictured), accepted the top prize in the Riptide start-up competition on Saturday from Southampton Town Supervisor Jay Schneiderman, who was one of the judges.
Jamie Bufalino
By Jamie Bufalino

Elias Van Sickle and Collin Kavanaugh, the entrepreneurs behind Montauk Mud, an environmentally friendly sunscreen, won the top prize — including $20,000 in cash and other investments in their company — at a local “Shark Tank”-like venture competition on Saturday.

The contest, called Riptide: Sink or Swim, was sponsored by I-Hamptons, a company that provides resources for start-up businesses.

During the final round, held at the Southampton Arts Center, Mr. Kavanaugh and four other contestants gave 10-minute presentations, and answered questions from a panel of judges that included Southampton Town Supervisor Jay Schneiderman and Kathleen King, the founder of Tate’s Bake Shop.

The finalists, whose pitches included everything from a tick-killing device to chile-infused tea, were judged on the feasibility of the product, the judges’ assessment of their ability to launch the business, the quality of the presentation, their plan for the prize money, and the likelihood that the business could create job opportunities on the East End.

Before the winner was announced, the runner-up prize — including $10,000 — was awarded to Charity Joy Robinson and Tomi Sloan, the makers of Kombat-cha, a variation on kombucha, the fermented probiotic beverage.

In addition to $20,000, Mr. Van Sickle and Mr. Kavanaugh won a one-year membership to The Spur co-working space, $3,000 in radio advertising, a 30-second commercial online, and an opportunity to appear on “The Pitch,” a podcast that introduces entrepreneurs to potential investors.

“This is huge for us,” said Mr. Kavanaugh of winning Riptide. “This money is really going to allow us to create a product that appeals to the masses.” Montauk Mud, he said, will be available for purchase next spring. “Being in stores in March is our goal, so we can be ready for the summer,” he said.