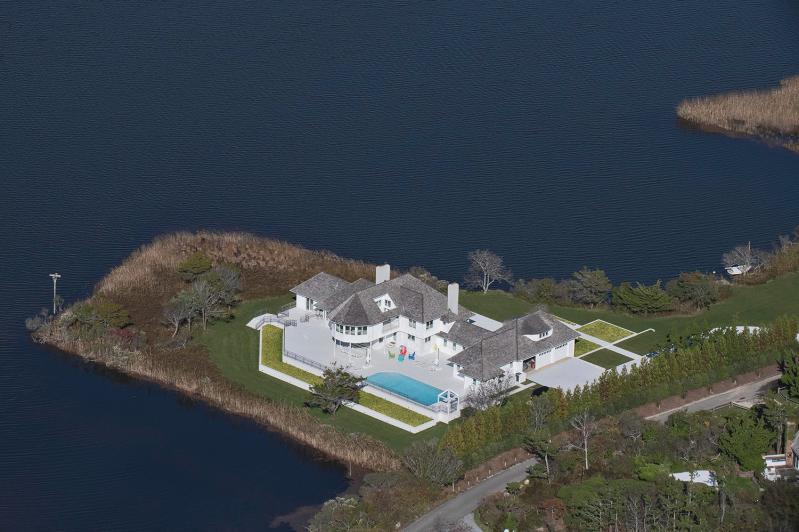 Harry Macklowe admitted he did not get permits for the extensive construction and clearing done at his house on West End Road in East Hampton Village.
Doug Kuntz
By Jamie Bufalino

Harry Macklowe, a billionaire real estate developer, admitted to the East Hampton Village Zoning Board of Appeals on Friday that he had built several structures at his Georgica Pond-front property at 64 West End Road without a permit, and cleared wetland vegetation there as well. He was seeking to legalize the structures, and promised to restore the wetlands, but the board quickly dismissed his application.

“The great majority of the improvements that we’re coming to you for approval for, have already been done,” Richard Whalen, Mr. Macklowe’s lawyer, told the Z.B.A. “They were built without the benefit of a building permit, or variances, or a wetland permit from this board.”

In an Oct. 23 memo to the Z.B.A., Billy Hajek, the village planner and a member of East Hampton Town’s water quality advisory committee, detailed the extensive construction on the property, all done within 150 feet of wetlands in violation of the code. Patios have been increased by more than 1,400 square feet, retaining walls have been expanded, a shed has been removed and replaced by a pergola, and a driveway has been reconfigured. Overall site coverage has increased by nearly 4,000 square feet, he said.

The property has also been cleared of a “significant amount of native and non-native vegetation,” Mr. Hajek reported. According to village code, no clearing, landscaping, or fertilizing can be done within 125 feet of the edge of any wetland.

Shortly after having purchased the property in 2017, Mr. Macklowe sought permission from the Z.B.A. to remove phragmites from the pondfront. The board approved the permit, Mr. Hajek said in his memo, on condition that the shoreline would be revegetated. “Based on my site inspection, the phragmites-cutting has occurred, but the revegetation plan has not been implemented,” he wrote.

In February, after construction had begun, the village’s Department of Code Enforcement issued a stop-work order. “The new patios and retaining walls do not meet the 150-foot setback [and the] new clearing and plantings do not meet the 125-foot setback,” wrote Robert Jahoda, a code enforcement officer, in the notice of violation.

In March, Mr. Hajek said, an officer witnessed more clearing and landscaping being done, and a summons to criminal court was issued. Still, Mr. Hajek said, “Work was occurring at the site on the date of this memorandum.”

At Friday’s hearing, Mr. Whalen denied that any landscaping or construction had been done after the stop-work order.

James Grimes, an East Hampton Town trustee who described the clearing of the property as an “egregious violation,” asked the board to table Mr. Macklowe’s application until a viable plan to restore the vegetation has been developed. The town trustees, he noted, own and manage Georgica Pond, which has had water quality problems due to nearby development, outdated septic systems, and the chemicals and fertilizers used in landscaping.

When he visited the property a year ago, Mr. Grimes said, he found that an existing vegetative buffer between the house and the pond had been removed. “Basically, they have cleared this entire site at this point.”

David Kirst, a lawyer for a neighbor at 85 West End Road, said the street has been more susceptible to flooding as a consequence of the clearing on Mr. Macklowe’s property.

Joann Carelli, another neighbor, said she had recently found one of Mr. Macklowe’s landscapers clearing part of her property. “This is really bad,” she said. “This is a very delicate piece of land here.”

Echoing Mr. Grimes’s assessment, Lys Marigold, the board’s chairwoman, said the violations were so “egregious” she would recommend closing the hearing without further discussion. The application, she said, is “a detriment to the neighborhood and the community, and we’re not just going to play along and say, ‘Take two feet off this, and three feet off that.’ I think we have to send you away, and have you come back.”

Ray Harden, the vice chairman, agreed, and said that in a future application Mr. Macklowe would have to propose removing some of the structures he had wanted approved.

Mr. Whalen encouraged the board to keep the hearing open and work with Mr. Macklowe on developing a revegetation plan, but members were not swayed. The board, said Ms. Marigold, needs to “make a definitive statement about this. You can’t buy a property on the pond and do anything you want without any permits. It’s just not okay.”