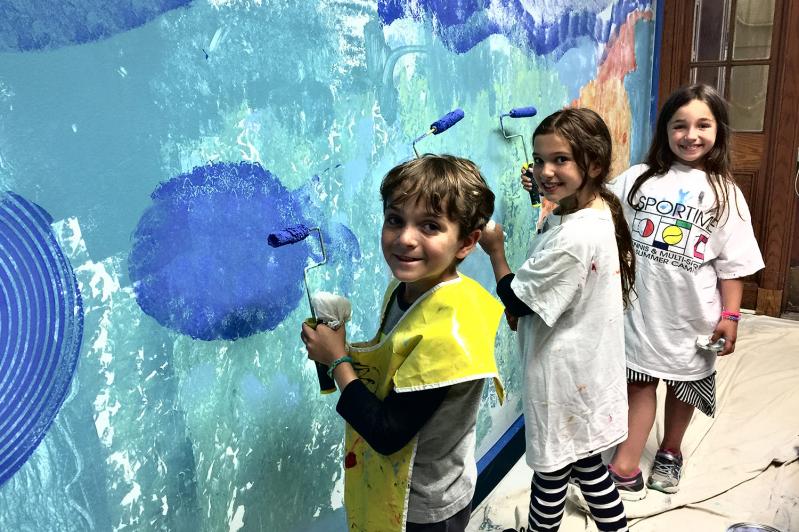 A cheerful, new seaside-theme mural in the front hallway of the school has added yet another educational element for the children, an Amagansett educator said this week. In bright colors, many indigenous sea creatures are depicted on a map of Long Island that pinpoints Amagansett, as well as several local landmarks, to help kids understand the geography of the region. And all of the imagery is in the belly of the mural’s whale.

“It was kind of an effort to give [students] a bit of local history while they’re waiting for their parents in the hallway,” said Kathy Solomon, who oversees the school’s learning lab. “Never waste a minute! We should always be giving them something educational to think about. I think that everybody has been delighted with the results.”

Ms. Solomon organized the process; the art itself was guided by Sue Bachemin, a Sag Harbor painter and screen printer who was also responsible for much of the lively library room at the Children’s Museum of the East End in Bridgehampton.

“We did four weeks of workshops where the kids sort of crafted what they wanted to see in the mural. It kept leaning toward ecology and taking care of the water,” Ms. Bachemin said. “The kids were great. After the fourth week, we started painting on the wall.”

The mural was begun in June and wrapped up during the first few school days in September. “They got really excited about painting seaweed,” Ms. Bachemin said. “The little kids would do sponging and the older kids would do circles and some stenciling.”

After the school day ended and during the summer, she had a little more flexibility to finish the work, bit by bit. The mural was done in acrylic and latex paints.

“I have never worked in a school environment that is so accommodating and kind,” Ms. Bachemin, who spends a lot of time doing custom wallpaper commissions, said. “I had to pinch myself. I said, ‘Is this real or are they putting on a show for me?’ They set such a nice easy tone there, and everybody’s really respectful of each other.”

The new mural replaces one that had been there for at least 20 years, Ms. Solomon said. “There’s been an effort to just kind of keep [the school] looking really sparkling and new.”

Ms. Bachemin wishes more schools would deepen their commitment to the arts. “Art brings joy,” she said. “I feel so strongly about more art education in schools. It’s been given short shrift of late. It’s a wonderful way to integrate all kinds of subjects.”