A lease, not a ‘partnership,’ an Inlet owner says 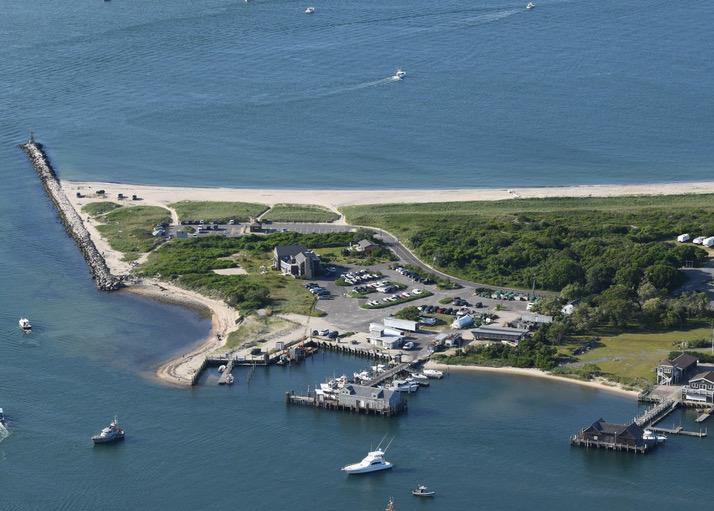 The developers of the proposed South Fork Wind Farm announced a lease agreement with Inlet Seafood in Montauk to locate an operations and maintenance facility adjacent to the latter’s commercial fishing and packing operation.
Doug Kuntz
By Christopher Walsh

An operations and maintenance facility for the proposed South Fork Wind Farm will be sited adjacent to Inlet Seafood, just inside Montauk Harbor, the wind farm’s developers announced last week. But whether the facility represents a meeting of the minds or merely a business arrangement depends on whom you ask.

Orsted U.S. Offshore Wind and Eversource, partners in the 15-turbine installation that would be constructed approximately 35 miles off Montauk, announced on Sept. 25 that they had reached a lease option agreement with Inlet Seafood to locate the facility adjacent to the latter’s commercial fishing and packing operation off East Lake Drive.

Orsted-Eversource crew transfer vessels will be based at Inlet Seafood and used to transport the wind farm’s maintenance crew to and from the wind farm, the developers said. The facility is being designed to ensure that the vessels do not impact the existing commercial fishing fleet or packing operations there, the Sept. 25 announcement said.

“We are pleased to be locating an operations and maintenance facility in Montauk to service our South Fork Wind Farm and bring additional jobs to the area,” Thomas Brostrom, chief executive officer of Orsted U.S. Offshore Wind and President of Orsted North America, said in the Sept. 25 announcement.

In the same announcement, Bill Grimm, an owner of Inlet Seafood, is quoted saying that the agreement between Inlet Seafood and the developers outlined how fishermen and offshore wind developers “can work at the dock alongside each other.” Yesterday, however, Mr. Grimm denied that he had made that statement, which has been reported elsewhere.

“There is no partnership,” Mr. Grimm said. “What there is, is a strict lease that only, at this point, entails the lease of one, possibly more, boat slips and some office space.”

Dave Aripotch, another owner of Inlet Seafood, told Newsday that he did not sign the agreement and would not take any of the lease money. Mr. Aripotch, a fisherman who is married to Bonnie Brady, executive director of the Long Island Commercial Fishing Association and a persistent critic of the wind farm, was offshore on Tuesday and yesterday A call to Inlet Seafood on Tuesday seeking comment had not been returned by press time.

Ms. Brady said on Tuesday that, while she could not speak on behalf of Inlet Seafood, the lease agreement “does nothing for the fisheries comprehensive mitigation and monitoring plan we’ve been asking the town board for, for three years.” Nor have the wind farm’s developers provided a mitigation plan in the event that the wind farm’s construction and/or operation proves disruptive to commercial fishing, she said. “This really doesn’t affect the people that need to be protected.”

The 130-megawatt South Fork Wind Farm, should it receive approval from federal, state, and local authorities, would be New York State’s first offshore wind farm and generate electricity sufficient to power 70,000 residences, according to Orsted and Eversource officials. The Long Island Power Authority will purchase the electricity generated at the wind farm through a long-term power purchase agreement. The developers expect the wind farm to be operational late in 2022.

Orsted and Eversource are also developing the much larger Sunrise Wind, an 880-megawatt wind farm to be constructed adjacent to the South Fork Wind Farm, and Revolution Wind, a 700-megawatt installation to be sited approximately 15 miles off Rhode Island. Sunrise Wind is to send the electricity it generates to Long Island; Revolution Wind is to serve Rhode Island and Connecticut.