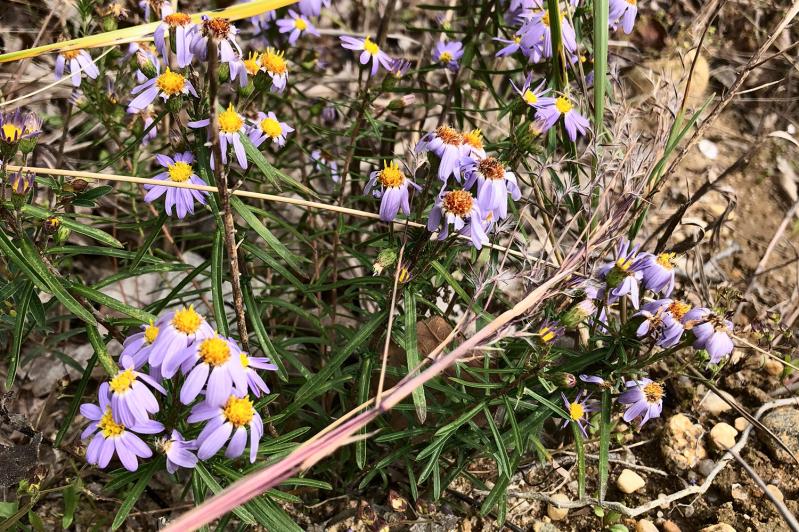 Asters, which are blooming now on the East End, belong to the largest family of flowering plants, most of which have seeds bearing feathery plumes that transport them aerially.
Carissa Katz
By Larry Penny

Monday was mostly sunny and calm. Most of the summer crowd had gone back to the city and parts west. It was also the last day of September and the eighth day of autumn, a perfect opportunity for a leisurely drive around Southampton, Sag Harbor, and East Hampton to see how fall was shaping up. Would it come later or earlier than usual? Were any wildflowers still in bloom, were the leaves losing their greenness, any beach plums or wild grapes to pick?

I started out from Noyac at 3 p.m. and didn’t get back until 6:45 in the evening when it was almost dark. I drove east through Sag Harbor, then south along Sagg Road, a not-so-much-traveled highway today, but the main connection between the whaling port on the bay and the ocean on the south in olden days. It’s one of my favorite back roads because it has very few houses along it that one can see while driving by. The traffic is comparatively light and the deciduous woods are thick and healthy on both sides, and always inviting.

I took all of the side roads running easterly and their north and south connection. They went through mostly sparsely developed areas with a sprinkling of fields, corrals with horses, big and small houses, very few if any lawns. The oaks were dominant, still quite bright green in the afternoon light. A few hickories and sassafras were scattered among them and every once in a while a dogwood with some dark red leaves and swamp maples with some bright red and yellow ones broke the pattern.

There were planted street trees along some of the roads, mostly sycamores with their white and dark boles and their rather unattractive drab leaves in their last stages before dropping. When I started studying the trees and the shoulders they demarcated I noticed something that I was unaware of during past rides. There were no utility poles. In their place were small pale greenish boxes that house the connections from the underground electrical feed cables to the house electrical circuits.

I didn’t see a single utility pole until I reached Town Line Road, which connects Sagaponack with Sag Harbor while separating Southampton Town from East Hampton Town. In an area with houses surrounded by woods, utility poles with live wires increase the chance of fires considerably. The area I was about to reconnoiter would be much less fire prone, I then realized. A son in Northern California lives not far away from the famous Paradise fire, which was caused by sparking power lines on utility poles and destroyed almost every single house in that community. Then I thought of all of those dead and dying pitch pines, many still standing in East Hampton’s Northwest. They line roads that have utility poles carrying live wires. Scary!

When I passed east of Town Line Road and made my way south to Montauk Highway, I finally ran into traffic, what was left of the “trade parade” and others heading west. Montauk Highway was lined with utility poles, but when I finally made it to East Hampton Village’s Main Street and turned east onto Dunemere Lane, guess what? More of those pale green boxes but no utility poles. In fact, I traveled the southern route as Dunemere became Further Lane all the way to Indian Wells Highway in Amagansett and did not see a single utility pole. “Where have I been all these years?” I asked myself.

I found some wonderful wild asters of two species along the south side of the Bluff Road sidewalk. I had traveled that road several times a week in the past, but had never seen an aster flowering there. (Asters belong to the largest family of flowering plants, most of which have seeds bearing feathery plumes that transport them aerially, sometimes for miles.) Hmm, I thought, that explains it.

At the end of Bluff I crossed Montauk Highway and went easterly along Cranberry Hole Road, another favorite. Nothing but green deciduous trees on both sides with a few healthy looking pitch pines scattered among them, until I got to north-running Bendigo Road, where the tall tupelos are dominant in the swampy wet soils. Voilà, no green leaves, just dark red wine-colored ones. Tupelos, named after Elvis Presley’s birthplace, are the last to get their leaves in the spring and the first to lose them in the fall.

I passed by the large stand of tupelos and made my way along Cranberry Hole Road, where shrubby bear oaks prevail with pitch pines, beach plums, and other plants that do well in duney soils. Utility pole after utility pole until I finally got to the very end where the windsurfers and the gulls hang out.

That last bit of road ending at Napeague Harbor’s west shore is rarely traveled. The gulls are as tame as humans and you can drive right up to them and they won’t fly, especially if they are working on opening a mollusk or a clam. One of the young ones I encountered had a small whelk in its beak. Presumably it had been dropped a few times but never cracked. I tried to get the little intact whelk for my collection of seashells, but the gull would have no part of it. I gave up and continued on my journey.

I backtracked and went to Montauk Highway by way of Napeague Meadow Road. A few seaside goldenrods were in bloom, as well as several groundsel tree bushes. This last species is one of the few woody members of the sunflower family — the rest are herbs — growing on Long Island. It has whitish flowers and thickish green leaves and mostly lives at the edge of salt marshes.

Route 27 took me all the way to Montauk Point. After leaving Napeague, it climbs up to Hither Hills where deciduous edge trees, mostly oaks, were still quite green. Many reached well over the road. The vegetation on the road to the  Point was a mishmash of faded green and cinnamon. The latter color was that of the undersides of thousands of fox grape leaves, which form a thicket on both sides of the highway after you leave East Lake Drive, the last north-south road before reaching the Point. Occasionally, the drabness was broken by a patch of bright red berries 8 to 12 feet off the ground, those of two species of hollies, the deciduous winterberry and the evergreen holly. The latter is common in the heathlands of south Montauk behind the bluffs.

On the way back, I noticed more utility poles than ever, three rows of them until I reached downtown Montauk. Then those flashing signs caught my eye, they were not flashing on the way east. I also stopped to checked for fox grapes — none — and for beach plums — also none. I did see a few small birds, sparrows and the like, but songbirds were few and far between, just as I had recently read read about in The New York Times. I also came to the conclusion that we had a long way to go before our trees begin to look like those in New England, at least until Halloween, maybe, even, not till after.