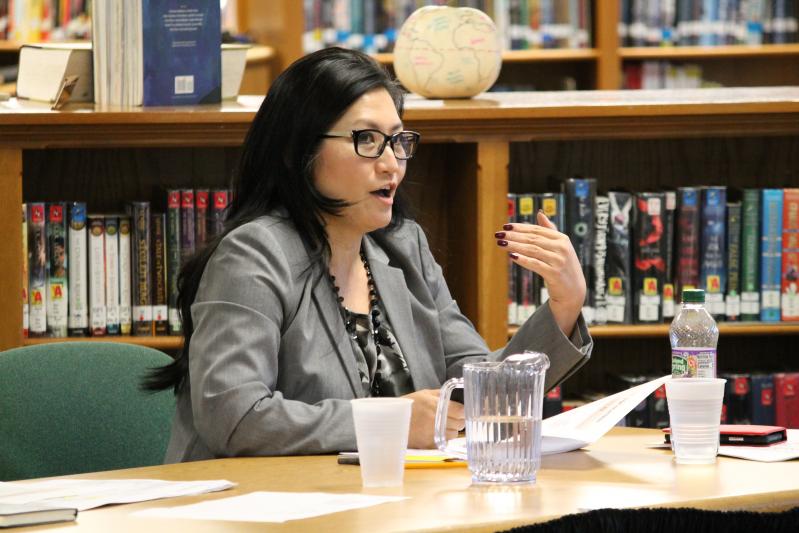 A former Sag Harbor school business official told the school board on Monday that the district superintendent, business staff, and the board itself all knew the former Stella Maris Regional School construction project was going to be millions over budget even before residents voted to approve the project.

Jennifer Buscemi, who left in 2017 to work full time for a district in Merrick but now consults in Sag Harbor, told board members that the rising costs were due to inaccurate estimates and omissions in the data initially provided by an architectural firm no longer working for the district.

What was originally a $10.23 million bond has ballooned to approximately $12.8 million, an increase of about $2.6 million that was not voter approved. Many of the needed renovations have been paid for through the district’s general fund surpluses, rather than money from the bond referendum, Ms. Buscemi said.

Of the initial $10.23 million, $3.3 million went to buy the building, $4.78 million was for renovations, and $1.04 million covered such costs as architectural and engineering services, surveying, and legal expenses. Money was also allocated for furniture and equipment, as well as contingencies for unexpected costs.

Ms. Buscemi said the district still has about $268,707 from the bond, but a little over $1 million of additional work remains, including some “future renovations” and “wish list” items the district had hoped would be completed.

“While very significantly over the amount, it’s expected to be less now than it was in October of 2017,” Alex Kriegsman, the school board vice president, observed.

The district is now proposing to spend $125,000 to build a retaining wall behind the school, after an existing one on neighboring property was deemed subpar. That sum is included in the “future renovations” total. Some board members indicated Monday that the retaining wall question has spurred legal action by the neighbors, but details could not be learned by press time.

Ed Bernhauer, one of the senior architects working on the Sag Harbor Learning Center, as the former Stella Maris School is now called, told the school board that “there’s nothing that’s currently compromised based on the construction that we did. We were looking at the walls on how they were actually built, and they’re not built on today’s standards. That’s our concern.”

Brian DeSesa, a school board member, recused himself from the discussion on the retaining wall. Mr. DeSesa, an attorney whose expertise includes land use, zoning, and planning, explained yesterday that Dennis Downes, a colleague of his in the Adam Miller Group, is working with the neighbors.

Ms. Buscemi also told the board that BBS Architects, the previous firm, had neglected to include some big-ticket items in its cost projections, such as a basement sprinkler system, an air-conditioning overhaul, and security upgrades. Also on that list of allegedly overlooked projects were estimates for the retaining wall and asbestos abatement.

Katy Graves, the Sag Harbor superintendent, clarified yesterday that the retaining wall cited in 2015 had actually been removed. The one in question “is a new one that they didn’t expect to put in.”

Yesterday, Ms. Graves  also said the 2015 building condition survey was not as extensive as the “facilities survey” that IBI Group, the current architect, did when it first came aboard and started fresh. BBS Architects could not be reached for comment this week.

This past May, changes to the IBI Group’s contract with Sag Harbor also added on to the running total of construction costs. Ms. Graves signed an amendment on April 12 awarding IBI a new monthly payment of $24,500 until the project is completed; the updated agreement notes it is for an expanded scope of construction and “an increase in the construction coordination effort.” Originally slated for the end of August, the project is now estimated to be completed by the end of December.

Ms. Graves also signed an agreement dated May 3 giving IBI Group an additional lump sum of $22,240 for more roof-related work. There are no school board resolutions on file corresponding to the April 12 and May 3 contract amendments. Clarification by the district should be forthcoming.

Mary Anne Miller, a former school board member, said she was glad to finally get a financial report, but “I can’t say that I’m shocked by the news. It’s pretty much what I suspected. I’m disappointed on a lot of levels about it.”

Some community members had hoped to comment and ask questions during Monday’s meeting, but the board adjourned to executive session immediately after Ms. Buscemi’s presentation, to interview candidates for interim superintendent. Among those who had questions was Sandi Kruel, who served multiple terms on the school board until 2017.

“About a week before the [Stella Maris] vote,” Ms. Kruel recalled this week, “we were told it was less than $1 million over budget — less than 10 percent of the project — and you’ve got your contingency. That’s not that hard to make up. I still felt it should have gone before the public.”

In May 2016, by a vote of 736 to 595, the community approved the $10.23-million bond referendum to purchase the school building from the Catholic Diocese of Rockville Centre and renovate it into a modern center for early childhood education. The proposal included moving the business office to the new building and using its former space to create an “enhanced Pierson middle school wing.” The school board renamed Stella Maris the Sag Harbor Learning Center in January.

Asked his opinion on the financials, Mr. DeSesa said, “I’m still reviewing them, because it’s been so long and there’s a lot of data to match them up against. It’s a step in the right direction for transparency.”

Yorgos Tsibiridis, another board member, said he was also “still digesting” the information. “I think we need to dive a little more into those numbers and get a better picture of why we got where we got,” he said.

Reached by phone yesterday, Chris Tice, also a board member, declined to comment. Mr. Kriegsman, Susan Schaefer, and Diana Kolhoff could not be reached for comment.

“On the one hand,” said Jordana Sobey, the school board president, “it’s unfortunate that it costs more than the bond, but that is a fact that everyone has been aware of for a very long time. I’m glad to know we finally have this accounting. . . . I think there was clear confusion over the last year and a half about it. I wish we had this all along, but we have it now, and it’s good to know that it’s not going to exceed the amounts discussed in 2017.”

She invited those with questions and concerns to send them to the superintendent and school board.

“In a perfect world, I wish we had infinite time, but unfortunately that wasn’t the case,” Ms. Sobey said. “The first concern is the 950 students in the district.”

That the district has been able to pay for work through its general fund speaks to the overall financial health of the district, Ms. Graves said yesterday. “We’ve run a very conservative, fiscally responsible budget. We’ve captured savings along the way,” she said. “We conserve so that these kinds of things can be aligned into the budget, If you ask about the overall health of the district, I think it’s been very, very stable.”