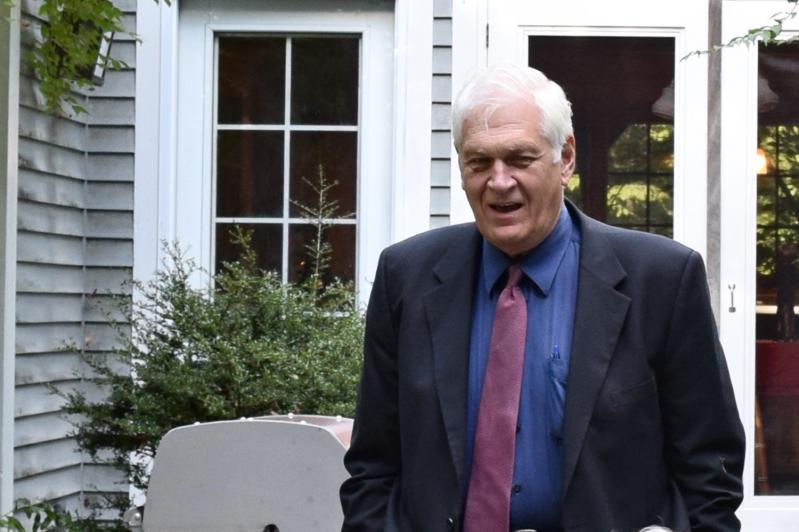 Suffolk County’s still-pure water sources are irreplaceable resources that must be preserved and protected, State Assemblyman Steve Englebright told a gathering in Amagansett on Oct. 4. For that reason, he said, future planning should be done within the context of a moratorium on development, and perhaps some houses should be removed.

The South Fork’s segment of Long Island’s sole-source aquifer system — residents rely on the groundwater beneath for drinking water — is “one of the most important, because it’s still very, very unspoiled,” Mr. Englebright, whose district includes portions of Brookhaven, told the gathering at the residence of Alexander Peters, an advocate for protection of the Stony Hill Aquifer. “It’s also more limited, perhaps, than most people realize.”

Salt water not only surrounds the South Fork, he said, but also goes underneath it. Unlike western Long Island, “where you can drill down all the way to bedrock and it’s fresh water the whole way,” the North and South Forks, along with Shelter Island, Gardiner’s Island, and Robins Island, “are all much more limited.”

Most freshwater bodies on Long Island are “surface expressions of the groundwater table,” Mr. Englebright, who chairs the assembly’s Committee on Environmental Conservation, said. “The equivalent of the table is sea level,” which is rising and is anticipated to continue rising due to human-induced climate change. While sea level has been rising for the last 21,000 years, he said, “it doesn’t make sense to change the rate of natural processes, nor does it make sense to change, or to not at least be aware of, what the limits are of water usage. It’s our first limiting factor for our society. If we don’t care for that resource and protect and preserve it and plan for its appropriate, sustainable use, we’re just kidding ourselves, or worse, we’re passing on to our children and grandchildren an unsustainable environment.”

He wondered aloud if the limits of water usage have been considered by East End town planners. “Has anybody in town planning been talking about carrying capacity?” he asked. David Gruber, a candidate for East Hampton Town supervisor who was in attendance, answered, “Absolutely not. It is never discussed.”

“Well, they need to readjust their thinking,” Mr. Englebright said, “because the Island itself, the totality of Long Island, has limits. That’s why our aquifer system is a sole-source aquifer system that is federally designated, and  by definition is thereby limited.”

We contaminate our water by living above it, Mr. Englebright said, “pretending as if it’s just normal to live on top of the water that you drink.” If we exceed the Island’s carrying capacity, “your water will by definition always be degrading.”

One should not assume that technological solutions, like sewers, will keep the water clean. While he agreed that new septic systems that reduce nitrogen leaching represent a technology that should proliferate, “understand that it, too, has limits. There are other contamination chemicals that are not treated by advanced wastewater treatment.”

Are we close to a tipping point, Mr. Englebright was asked. “I believe that the tipping point can actually be defined, if you take a look at carrying capacity,” he answered. “I’m not going to speculate what that number of people that can dance on the head of a pin is, but . . . my own gut feeling is that we are near the tipping point.”

What if we have passed that point, Mr. Gruber asked, the South Fork’s population already exceeding its carrying capacity? “Then you have to freeze processes of approval for additional population,” Mr. Englebright answered. “So we need a moratorium.” There are few buildable lots remaining, Mr. Gruber said. If we have overshot capacity, even if no further residential construction were allowed, “What do we do?”

“You should use your real estate transfer tax to purchase strategic properties,” the assemblyman said. “I think that makes a lot of sense for the Stony Hill aquifer. I believe it would only be prudent to purchase rather than give approval” for new construction.

It is a “radical idea,” Mr. Englebright continued, “but at some point we may have to start removing houses. . . . We should not lead with that idea, because people will probably react very badly to it. But we should do some carrying-capacity evaluation and build some assumptions in to how many people can live on this oceanic island — it looks like a peninsula, but it behaves like an island. And all islands have limits.”