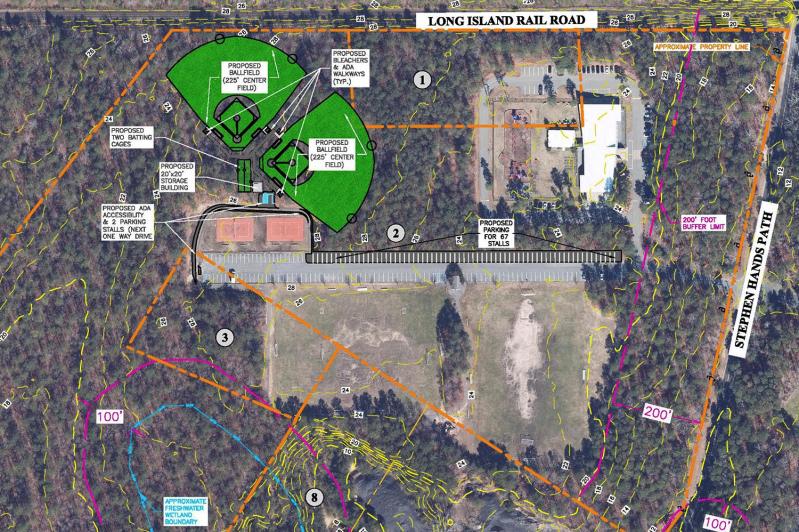 A committee charged with scouting new locations for the playing fields that will be displaced by a new emergency care facility identified the former C.D.C.H. property adjacent to other athletic fields, above, as a suitable site.
L.K. McLean Associates
By Christopher Walsh

The two Pantigo Place East Hampton Little League baseball fields that will be displaced by construction of the Southampton Hospital Association’s planned emergency care facility should be relocated to the grounds of the former Child Development Center of the Hamptons on Stephen Hand’s Path, members of a committee reviewing the fields’ relocation told the East Hampton Town Board on Tuesday.

Tim Garneau and Matt Jedlicka made the recommendation to the board based on the committee’s research as well as an evaluation by the consultants L.K. McLean Associates.

The proposed emergency care facility at 400 Pantigo Place is intended to serve people living east of Southampton Village. The property lease is to span 50 years. The hospital association, a not-for-profit that jointly operates Stony Brook Southampton Hospital with Stony Brook University Hospital, holds an option for a 25-year extension and, upon its completion an additional 24-year extension, for a total of 99 years.

According to the lease, the association is responsible for the removal and demolition of the existing playing fields as well as construction of the fields that will replace them. Terms also provide that the new fields contain all amenities that exist at the current fields, such as two fields with appropriate markings, dugouts, scoreboards, restrooms, lighting, bleachers, and parking. The project is to be completed before breaking ground on the emergency care facility.

The relocation committee considered properties meeting certain criteria. Town-owned properties, undeveloped properties, sites larger than seven acres, and sites purchased with community preservation fund money for recreation purposes were considered, with the committee also examining existing infrastructure, accessibility for Little League families — there were 320 players this year — and proximity to neighbors. The committee also met with parks and recreation managers of other townships, and made site visits to playing field complexes in Suffolk County.

The former C.D.C.H. school property at 110 Stephen Hand’s Path satisfied several criteria, Mr. Garneau told the board. It has existing playing fields for soccer, a comfort station, a playground, the former C.D.C.H. building, and around 120 parking spaces, not including those serving the old school building.

An additional 133,000 square feet of land would be cleared, he said, an increase of approximately 5 percent. A 200-foot vegetative buffer would remain between Stephen Hand’s Path and the grounds. The fields would be 420 feet from the nearest neighbors. The comfort station would be updated to include a low-nitrogen septic system, and more parking would be added.

If all went according to plan, construction of the playing fields could begin next summer or fall, and be ready for Little League’s opening day in April 2021.

The committee suggested synthetic turf playing fields. These, Mr. Garneau said, reduce maintenance and reinstallation costs in the long run, are favored over natural fields in new construction, and would not require use of fertilizers, which are prohibited on town property.

The board was supportive of the committee’s recommendations, with one exception. “I’m a big baseball fan,” said Councilman Jeff Bragman, but added of synthetic turf, “I do not favor it . . . despite the monetary terms.” Injuries are more likely to occur on synthetic turf, he said, but he also spoke to “something about the character of the area we live in.” The town’s residents are proud of natural habitat, terrain, and features, he said. “Something in me rebels against seeing boys and girls playing on artificial turf.”

Mr. Garneau, who said that he is also a purist, pointed out that the East Hampton High School’s varsity field’s natural grass and dirt have proven problematic, with rain resulting in “an inordinate amount of games” played on the road because the home field was not playable. The Little League season is short, he said. “I feel it really is advantageous to have at least the infield be artificial turf.” Synthetic turf has become more realistic over the last decade, Mr. Jedlicka said, and injuries on turf are fewer than in the past.

David Rutkowski of Montauk, who is on the committee and on the Little League board, said that a Little League coach already shoulders multiple responsibilities following a day’s work, and does not have the luxury of the dedicated grounds crews that major league teams employ to maintain a field in optimum condition.

“I don’t want to see our kids playing on plastic,” Mr. Bragman said. In the Sag Harbor School District, opposition to synthetic turf was so strong a few years back that the district abandoned a plan to install synthetic fields there, but at East Hampton the football field is synthetic and so is the varsity baseball infield.

Supervisor Peter Van Scoyoc said that a decision on turf versus grass could be deferred for the time being.

The town purchased the 22,000-square-foot former C.D.C.H. building last year, though it already owned the underlying land. The school closed in 2016. Following the building’s renovation, it is expected to serve as a community center. That, coupled with the playing fields, would represent “a whole community synergy on that site,” Mr. Van Scoyoc said.