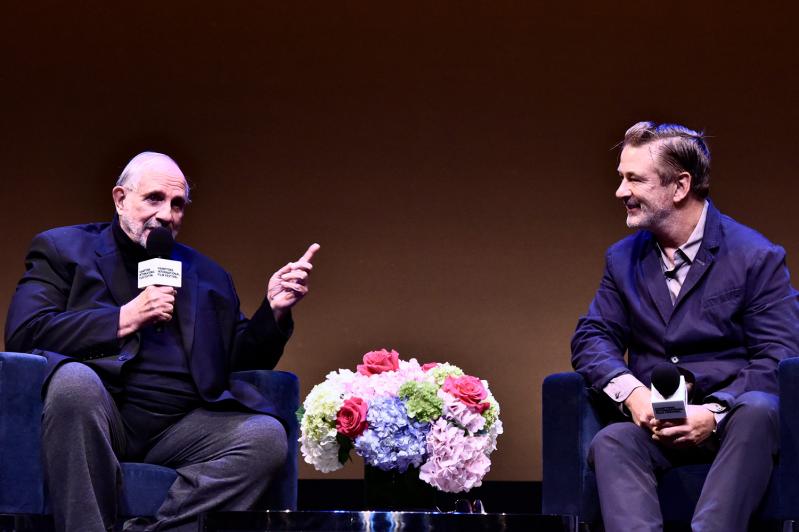 In East Hampton to receive the Hamptons International Film Festival’s Lifetime Achievement Award for his long career in directing movies. Brian De Palma spent an hour lobbing anecdotes, opinions, and snippets of film industry gossip back and forth with Alec Baldwin on Saturday afternoon at a packed Guild Hall.

Mr. De Palma’s five-decade career began in New York in the late 1960s and included a pair of satires that starred a young Robert De Niro and reflected the early stylistic influence of Godard and Hitchcock.

After moving to Hollywood in the 1970s, he emerged as a leading member of a new generation of filmmakers that included Steven Spielberg, Martin Scorsese, and George Lucas, among others. The milestones in his extensive filmography include “Carrie,” “Dressed to Kill,” “Scarface,” “The Untouchables,” “Carlito’s Way,” and the first “Mission Impossible.”

During their conversation, Mr. Baldwin noted the many stars Mr. De Palma worked with at the apex of their careers, among them Al Pacino, Kevin Costner, and John Travolta, who starred in the 1981 film “Blow Out,” which was shown Saturday at the East Hampton Cinema.

“I wrote ‘Blow Out’ after ‘Dressed to Kill,’ which was a big hit, so suddenly I was a genius,” said the director. After Mr. Travolta signed on to the project, the budget went from $6 million to $16 million, “and everything got bigger.”

Mr. De Palma said that making a $5 million movie is more or less the same for him as making a $100 million film. “Obviously there are more people around,” he said. He added that to do the elaborate set pieces for which he is known, he needed the top technicians, and they are in Hollywood. “They always said about Orson Welles that he lost the ability to use all those great technicians, and it showed in his work. I think that’s true.”

While Mr. De Palma has written many of his own films, he stressed the value of also working “in other people’s ballparks. That’s why I’m attracted to really great writers. It enlarges you because you have to tell their story with the techniques you’ve developed yourself.”

Of “Carlito’s Way,” which was written by David Koepp, he said “I was watching it at the Berlin Film Festival and I said to myself that I can’t make a better picture than this. And it wasn’t a big success. It killed me. I decided I was going to go out and make a success.”

Soon after, he heard from his agent, Mike Ovitz, that Sydney Pollock, who was working on “Mission Impossible,” wanted out of the project. “So Mike asked me if I would be interested. And I said, ‘Tom Cruise! ‘Mission Impossible’? You bet!’ It was the biggest hit of my career.”

Though often cited for his stylistic ingenuity, Mr. De Palma stressed the importance of actors. “You’ve got to get great actors to make these stories work, because if the actors aren’t good, you aren’t good.”

Mr. Baldwin said, “None of your peers — Steven, Marty, George — has anything on you when you shoot these things you shoot,” referring to his elaborate set pieces, dramatic camera angles and compositions, panning and tracking shots, and precisely choreographed long takes.

“Needless to say, Marty and Steven are very skilled at those kind of sequences,” said Mr. De Palma. “I think the difference is that Steven always used the same composer, John Williams. And Marty uses rock and roll basically. I used a variety of the best composers who were writing during my era, and that may be why my sequences stand out. Ennio Morricone’s score for ‘Casualties of War’ will tear your heart out.”

Mr. De Palma has also worked with many of the top cinematographers. Asked if he preferred shooting and cutting film to working digitally, he said, “I’m a science brat. I love the new technology. When I shoot digitally, the key thing is to get a cameraman who knows how to light it. It doesn’t have to look like that brown crap you see all the time.”

“Scarface” was X-rated at first. He made a few cuts, sent it back, and it was returned with an X. He made several subsequent cuts of violent material without appeasing the board. “I finally said, ‘What?’ They said, ‘It’s the clown getting shot!’ The clown getting shot? It was too much.” Over the objections of the studio head, he resubmitted the original cut to the full board, and it was eventually approved.

Of the scene in “Scarface” where Mr. Pacino appears with his gun and says, “Say hello to my little friend,” Mr. De Palma explained why so many people are shot in it. “When we went on the set to film that sequence, the set burned down. Then, when Al was using that gun, he grabbed it by the barrel, and it was so hot he burned himself severely.”

“He went to the hospital for two weeks. So here I had a set, no Al, but I had a lot of Colombians. So we spent those two weeks shooting Colombians.” Of Mr. Pacino, he said, “Al can hold the screen with that incredible face and voice; you just sit there riveted. And he’s not only a great actor, he moves so gracefully.”

He cited Quentin Tarantino’s “Once Upon a Time in Hollywood” and Noah Baumbach’s “Marriage Story” as two recent films he admires. “We’ve got some good directors working,” he said, moments before his daughter, Piper De Palma, came onstage to give him the festival’s Lifetime Achievement Award.